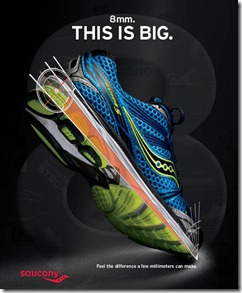 As anyone who has been reading this blog for awhile knows, I’ve long been a fan of Saucony shoes. The Kinvara has been my go-to long run shoe for the past year, and was on my feet for each of my last two marathons. The zero drop Hattori is also a nice little shoe, and with a little reworking of the upper to create a more secure fit and eliminate blistering problems, it could rank as one of my personal favorites.

Beyond my regular personal use of some of their shoes, perhaps what I like most about Saucony’s approach to footwear is that they are diversifying their shoe line across the board, and they are making variation in heel-forefoot drop a major thrust of their design process. In addition to a full suite of traditional 12mm drop models, they have filled out the 4mm drop category with the Kinvara, Mirage, Cortana, and Grid Type A4. They also have the aforementioned zero drop Hattori. However, a big gap exists between the 4mm and 12mm models – that’s about to change.

To what I’m sure will be the delight of some, and horror of others, Saucony is moving three of it’s flagship shoes – the Guide 5, Triumph 9 and Hurricane 14 – from a 12mm heel-to-forefoot drop to an 8mm heel-to-forefoot drop. In doing so, Saucony fills a gap for people who want to make a slow progression to shoes with a lower heel=forefoot offset. While one can argue about whether a step-down approach or a barefoot-up approach is best, the reality is that there are a lot of runners who will never consider running barefoot. For these individuals, the step-down approach can make good sense as it gives the calf and Achilles time to adapt to a lower heel. The following video explains Saucony’s thoughts on this, and it has some really great slow-motion footage of a heel vs. a midfoot strike:

Saucony contacted me last week and offered to send me a pair of either the Guide 5 or Triumph 9 to test and review here on Runblogger. I initially hesitated as I rarely run in anything greater than about 4mm drop these days, but I have a personal history with one of these shoes that led me to agree to agree to a trial. The Saucony Guide was actually the last “traditional” shoe that I wore before making my minimalist transition (which started with the Nike Free 3.0 back in Spring 2009), and it’s the shoe that I now put on whenever I want to feel how strange it is to stand in a shoe with a 12mm heel raise. Now that I’m essentially zero drop most of the day and generally no more than 4mm drop when I run, it’s kind of strange to imagine that I actually was ever able to run in a shoe with such a slanted sole (funny how things change as you adapt to more minimal footwear!). Anyway, I’m curious to see how the new Guide compares as it will help me to provide recommendations to those looking for step-down shoes.

I don’t have the shoes yet, but they will be sent out soon. In addition to sending me a pair, Saucony offered to provide a pair to one of my readers. I’ve never run any kind of contest before here on the blog, but I guess there’s a first for everything!

So, here’s the deal. Answer the questions below and submit to enter. On Monday I will randomly select a winner from the entrants and contact the individual via email to put them in touch with Saucony to claim the prize (either the Guide 5 or Triumph 9) and arrange shipping. I hope this form works – I’ve never tried this before!

Update 10/17/2011: The shoe giveaway has been closed and a winner has been selected – congrats to Jacob Shipley!