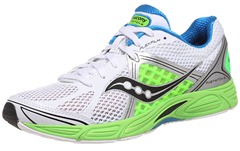 I have a fair amount of history with the Saucony Fastwitch line. The Fastwitch 2 was my first racing shoe, and it was the shoe I wore for 2 of my first 4 marathons. It was also my first real racing flat, and it introduced me to the benefits of lightweight footwear.

Two years ago, almost to the day, I reviewed the Saucony Fastwitch 5. I was excited about the shoe because they had lowered the heel a bit, but I wasn’t a big fan of the firmness of the midsole or the ride, both of which are quite different from the softer Saucony Kinvara that I was putting a lot of miles on at the time.

It’s funny how shoe preferences can change over time. A bit over a month ago Running Warehouse sent me a pair of the Fastwitch 6 to review. I was wary of reviewing it at first because of my iffy experience with the previous iteration, and as far as I could tell the sole is identical. I’ve now put just about 50 miles on the Fastwitch 6, including three double-digit mileage runs, and I have to say that my opinion has changed quite a bit – I’m very impressed by this shoe.

The first pair of the F6’s that Running Warehouse sent was a size 10.5. It fit, but felt snug, so I sent it back in exchange for a size 11. Interestingly, this is a full size larger than I took for the Fastwitch 5. I’ve found that my standard shoe size has migrated up from a 10 to a 10.5 over the past year (not sure if my feet have gotten bigger or my tolerance for tight shoes is reduced), and I needed a bit more length in these than in other Saucony shoes. On the plus side, the fit in size 11 is fantastic, and the forefoot feels considerably roomier than in the Kinvara, Virrata, or A5. The fit is somewhat reminiscent of the Mizuno Ronin 2, which is a good thing.

The upper of the Fastwitch 6 is composed of a really nice open mesh with welded overlays. In a world where so many shoes are now-made of non-stretchy materials, I like the old-school upper of the F6 even if it isn’t the prettiest shoe on the market. It breathes incredibly well, and the stretch allows me to move my toes around without a great deal of restriction. Super comfortable in terms of fit.

Internally, the upper feels a bit scratchy against bare skin, and I’ve hesitated to try running sockless in them as a result. In contrast, the material inside the ankle collar is super-soft and comfortable. Since the shoe is designed to be a “stability flat” there is a plastic heel counter – though I prefer not having a heel counter, it doesn’t seem to bother me in most shoes, this one included. There is also noticeable arch support, so that needs to be considered for those who prefer a flat arch. Running without the insole is not a good option since the footbed is covered by a scratchy mesh which allows water to drain through holes in the sole (you can see the holes in the forefoot in the photo below).

As mentioned above, the sole of the Fastwitch 6 is identical to that of the Fastwitch 5. Given that the sole was what I did not like about the 5, I’ve been surprised by how much I am liking the new version (wondering if it has to do with upping the sizing?). Running Warehouse reports stack heights of 18mm heel, 14 mm forefoot, and that feels about right to me. The sole is firm, responsive, and provides a degree of stiffness typical of a racing shoe. That being said, forefoot flexibility is pretty good. The sole does have a medial post, though I can’t honestly say whether it does much – I have not noticed it myself.

A big plus for those who chew through soles of shoes like the Saucony Kinvara, Virrata, or A5 is that the Fastwitch 6 has an extensive rubber outsole. As a result, I expect durability will be very good.

I’ve put about 50 miles on the Fastwitch 6, including an 18 miler and two sub-marathon pace 10 milers. The 18 miler was easily the best long run I’ve had so far this training cycle, and I’m seriously contemplating wearing the Fastwitch 6 in my marathon next month as a result (Skechers GoRun 2 and Kinvara 4 might be the other options). Both 10 milers have also been strong, and the shoe has caused me no issues. It’s a shoe that pretty much disappears on my feet.

The Saucony Fastwitch 6 is an incredibly versatile shoe with a generous fit in the forefoot (though you may need to size up to feel it). As a structured flat, it can be used for speedwork, long runs, and just about anything else. I’d feel very comfortable wearing it for a marathon, though personally I’d opt for something a tad lighter and stiffer in a 5K.

For someone looking to buy a first pair of racing flats, it would be a great option, and is also a good choice as a daily trainer for someone who enjoys running in a firm and relatively roomy shoe. Big thumbs up for the Saucony Fastwtich 6!

The Saucony Fastwitch 6 is available for purchase at Running Warehouse in the following colors: