I loved the Saucony Grid Type A5. Loved it. I might go so far as to say it’s the best shoe I’ve ever run in. I’m not exaggerating.

As I wrote in my review of the A5, what I loved about the shoe was its simplicity. I like shoes that aren’t stuffed to the gills with dubious “technology.” Give me a wedge of foam, an upper that doesn’t cause blisters or fall apart, and a toebox that fits just right and I’m happy. And if you can do all of that for under $100, all the better.

About a year ago I was down at Saucony headquarters in Massachusetts for a visit, and at lunch they brought out some of their next generation shoes. The Saucony Grid Type A6 was one of them. And it looked a lot different.

One of the biggest sources of angst for a runner is the update that kills the shoe they love. I was wary of the changes made to the A6. In particular, Saucony had added a much more substantial rubber outsole. Would this change the ride for the worse? Would the shoe be heavier as a result?

I’ve waited a year to find out, and yesterday the A6 arrived on my doorstep (Disclosure: these shoes were media samples provided free of charge by Saucony). I did a little happy dance when I opened the box, but I had just gotten back from a killer Taekwondo workout (sparring = rubber legs), and no way was a run gonna happen last night.

I woke up this morning with a decision. I could take the Brooks Connect 3 out for a final pre-review run, or skip that and try out the A6. No contest. It’s not that the Connect is a bad shoe (I’m actually liking it a lot even given its funky fit), it’s just not the A6. The A series holds a special place in my heart. It’s OK for an almost 40-year-old guy to publicly admit feelings like this about a shoe, right?

My plan was to just run 5 easy, but that didn’t happen. The A6 is not a shoe built for casual jogging. It begs to go fast. And in that sense, yes, it does feel a bit different than the A5. I need a refresher run in the A5 for a more thorough comparison (will do that soon!), but the A6 feels a bit more like a rocket to me. Maybe a bit firmer with the added rubber, maybe a bit stiffer. Maybe a bit more like a Japanese racing flat in the vein of the adidas Takumi Sen or Mizuno Ekiden. 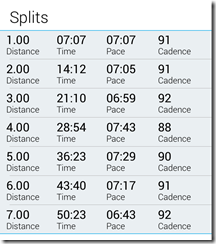 Needless to say, I wound up running just over 7 miles at a much faster pace than I’ve been running of late (starting to get back in shape after a tough second half of 2013!) – see splits at left via iSmoothRun.

As I mentioned above, the A6 is a firm shoe, and as is typical of racing flats it has a low stack height of 16mm heel, 12mm forefoot. The heel is not soft, and it’s not a shoe that is going to tolerate a heavy heel strike (well, the shoe might tolerate it, your body however might not). I have a mild heel to midfoot striking gait and it was fine, but I’d probably opt for something a bit cushier for distances beyond the half marathon (e.g., NB 1400v2 or adidas Adios Boost).

Once you start to pick up the pace a bit, this shoe flies. The added rubber on the outsole gives the shoe a very stable feel underfoot, and the sole has no cutouts (a full-contact sole as John Schrup would say). It’s not as stiff as the adidas Hagio or Takumi Sen since it doesn’t appear to have any type of shank to increase sole rigidity (the little plastic truss under the arch in the A5 is gone) – I might prefer a more rigid sole for a 5K (though these might be my choice for my next 5K, just because), but the added flexibility of the A6 should make it suitable for me up to the half marathon. It’s similar to the A5 in that sense, I ran my half marathon PR in the A5.

A point to note about the sole is that it retains the drain holes found in previous iterations – in fact, they’ve grown larger (but smaller in number). These can collect pebbles and provide easy access for water to enter from puddles, but honestly the holes have never bothered me too much. A friend (thanks for the tip Stefan!) suggested to just fill them in with a bit of shoe goo if they cause you trouble.

The upper of the A6 is composed of two layers of mesh welded together into one layer. The inner layer is a soft mesh with big holes, and the outer layer is a finer mesh that actually has a bit of give to it. It feels great, not plasticy and restrictive like the mesh on the Kinvara 5. I ran with socks, but I stuck my bare foot in and it feels pretty nice against the skin. The ankle collar is nicely padded and lined with a really soft fabric. Heel counter is similar to the A5 – small and extends only about halfway up the heel. The upper did seem to break in a bit even over the course of my first seven miles in them, no issues as far as comfort goes. 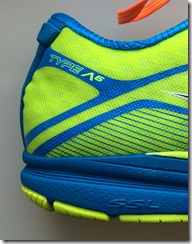 One small but significant change to the upper is worth mentioning – in my review of the A5 one of the only complaints I had was that the pull string on the back of the heel was secured inside the upper by what felt like knots. Those knots created hot spots when I ran sockless in the A5. The A6 trades the string for a flat, stretchy band in this area. The little knots are no longer perceptible so I’m hoping that takes care of that problem.

In terms of fit, the width of the A6 is similar to the A5 – not a wide shoe by any means, but it’s a racing flat so that’s to be expected. It does seem to run a tad longer than the A5. Saucony sent me a 10.5, which is what I wore in the A5, but I asked them to send a second pair in size 10 as I think these might be just a tad large. I’ll report back on how the sizing feels when the second pair arrives (Update – wrote a post on sizing for the Saucony A6 here). My gut right now is telling me that wearing a half size smaller than the A5 or Kinvara 4 is the way to go. We’ll see.

Perhaps the most impressive thing about the A6 is that Saucony added a bunch of rubber to the sole, but the shoe actually got lighter. My A6’s in size 10.5 weigh in at 6.1 oz. Running Warehouse reports 5.4 oz for the A6 in men’s size 9, vs. 5.8 oz for the A5 in the same size. Not sure how they managed to add outsole material and reduce weight, but I’m not complaining! (I’d weigh my A5’s in size 10.5 for comparison, but they’re at the office…). The added rubber should improve durability for those who had the habit of ripping off the little rubber nubs on the forefoot of previous iterations of the A series. Never happened to me with the A5, but I’m not opposed to more rubber if it doesn’t incur a significant weight penalty.

One thing I will say about the new outsole is that it handles poorly on snow and ice. But hey, it’s a racing flat so I didn’t expect much in that area!

My initial impression is that I’m going to like this shoe a lot. It’s a go-fast shoe built for runners, not a shoe you’ll find on the wall at your local shopping mall.  It’s a bit different from the A5, but not in a bad way. I need more runs to dial in my thoughts (as well as a refresher run in the A5), and I’m looking forward to trying them in a size 10 to see how the fit compares. You can expect a follow up post soon!

The A6 is available for pre-order now at Running Warehouse, and it’s estimated to ship mid-February. 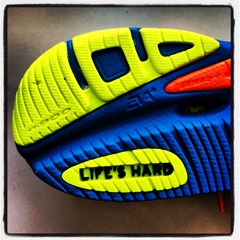 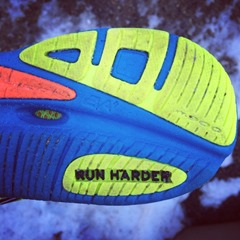