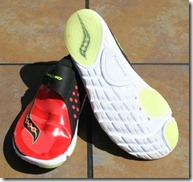 One of the coolest parts of the Boston Marathon weekend experience was the Expo – it was a bit overwhelming for a gear junkie like me to be surrounded by the latest offerings from all of the major running gear and shoe brands. Somewhat surprisingly, I bought very little aside from official race gear – the one exception was a shoe that I have been eagerly awaiting: the Saucony Hattori.

The Hattori is an interesting shoe in that it is the first truly zero drop shoe from one of the major running shoe manufacturers (i.e., the sole is completely flat with no differential between the heel and forefoot). Other zero drop options are out there (e.g., the Altra Instinct, Vibram Fivefingers, Merrell Barefoot, Terra Plana Evo/Neo, GoLite Amp/Tara Lite), but Saucony was the first of the big players to make the foray into the flatlands.

After a few wears, I have to say that the Hattori is most definitely a unique shoe. Weighing in at a feather-light 4.5 oz (in my size 10), the only shoe I own that weighs less is the Mizuno Wave Universe. The upper has a sock-like feel to it – it’s made of a stretchy fabric that provides a snug fit over the foot. It almost feels like a water-shoe in that sense – hugs the foot but not in a constricting way since the upper is so minimal. It feels just a bit wider in the forefoot to me than the Kinvara, but the upper is more accommodating. There is no insole, and the sockliner has a squishy kind of feel to it that molds to the foot. Those who don’t like cushion might get annoyed by this, but it doesn’t bother me. The midsole is moderately firm, though not in the league of a Vibram Fivefingers or Merrell Barefoot – according to official specs it measures at 13 mm heel and 13 mm forefoot.

The outsole design has raised a few eyebrows due to the location of the rubber reinforcement pods. For a zero drop shoe, many would prefer to see added reinforcement on the lateral forefoot, but the Hattori pods are restricted to the heel and medial forefoot (note, there is a pod missing in the photo below underneath the big toe – mine has one in that spot). The heel protection makes sense as I always do some amount of walking in my running shoes and scuff up the heels, but I’m unsure of the reason for placing the forefoot pods on the inner side. This could cause durability issues for people who tend to generate friction along the lateral forefoot. I tend to wear my forefoot evenly (my Kinvaras are still holding up great), so I don’t think this will be a big problem for me. The midsole is also quite flexible, and I can bend it easily with my foot even while stationary. 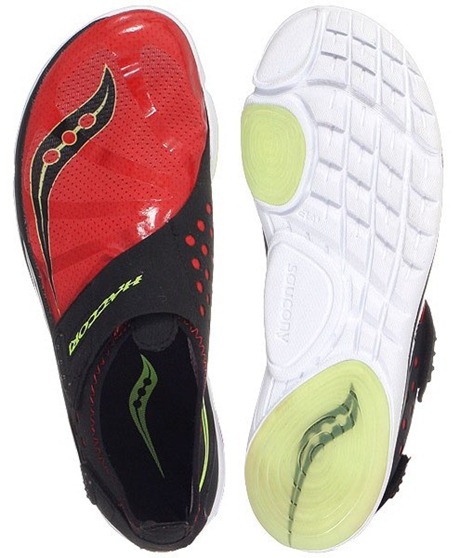 So far I have only run in the Hattori 3 times – once for 1.5 miles on the treadmill, a quick mile on the sidewalk, and earlier today I ran a hilly 5.70 mile tempo run in them at 6:49/mile pace (wanted to put them to the test!). The shoes feel really good out on the road, and I found it very easy to maintain good form in them. The sole has some give, but because it is relatively thin, it’s not as soft feeling as the Kinvara – I actually like the feeling of the sole quite a bit. If I had one modification I could make, I would add a mechanism to better secure the upper to the foot. The velcro straps help a bit, but the shoe needs something a bit further forward as well. Because the forefoot isn’t tightly secured, I think it allows my feet to slide around a bit and I developed hotspots on the balls of my feet behind my big toes. My skin will most likely adapt to this, but I’d suggest a velcro strap across the forefoot or a lacing system like the Vibram Fivefingers Bikila LS might help to better secure the foot in future incarnations. Despite this quibble, I foresee myself putting a lot of miles on these shoes – they really hit a sweet spot for me in being extremely light, very flexible, zero drop, and moderately cushioned.

The Hattori is available for pre-order at Running Warehouse (click ad at bottom of post), though it will not be in stock until late May, with a few of the colorways not being released until June. If the number of people trying them on at the Boston expo was any indication, there looks to be a lot of interest in the Hattori. The color options span from loud and flashy to subdued and conservative, so there should be an option to suit everyone’s preference. It is a bit of an odd looking shoe (my wife is not a fan – she said they look like prison loafers!), but I wear the Fivefingers out in public so I’m used to attracting attention with my footwear.