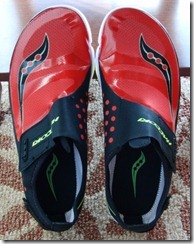 Yesterday, fellow shoe reviewer Frederic Brossard offered to send me a translation of his review of the Hattori (originally posted in French). Fred is a minimalist runner, freelance writer, and shoe reviewer for France’s top running magazine « Jogging International » and website http://runners.fr. I’ve known Fred for awhile now through our shared interest in minimalist shoes, so I gladly accepted his offer – it’s always good to get different perspectives on shoes since individual experiences with a given shoe can vary widely. Fred took a unique approach in his review by including, in addition to himself, a runner who was a novice when it comes to minimalist running. What follows is the translation of Fred’s review:

I have been wearing minimalist shoes for nearly two years. As we say in French: “for the best and the worst.” The best being personal record 10K and marathon performances, the worst being a stress fracture of the second metatarsal in my right foot (which, however, didn’t prevent me from keeping on with minimalism). My long experience combined with Saucony’s data sheets had already convinced me that the Hattori would certainly be a great shoe, even before I had the chance to wear them. So, in order to give my readers an unbiased report, I asked a female friend of mine to also review the shoe. Marie, a competitive athlete, was an absolute beginner in terms of minimalist running. 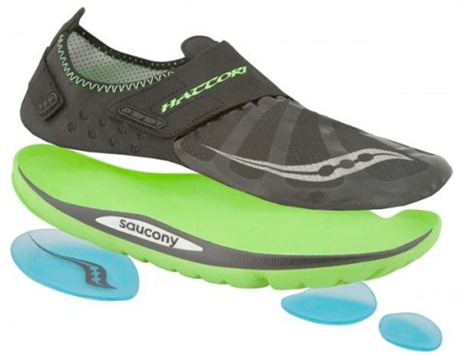 The Hattori is certainly closer to Peter’s 8 characteristics of minimalist running shoes (https://runblogger.com/2010/07/runbloggers-guide-to-minimalist-running.html) than most other shoes I know.

3) Minimal structure in the upper. Rather stretchable which allows a perfect fit.

6) No support elements, no removable insole.

7) Very close to the ground

Regarding flexibility, the sole as a whole is rather stiff but there are two main bending zones just under the base of the toes and under the middle of the foot. There are also three protective inserts on the outsole: two under the big toe and first metatarsal and one, quite surprisingly, under the heel. These inserts are supposed to “guide” your stride by creating a live rail that you just have to follow. 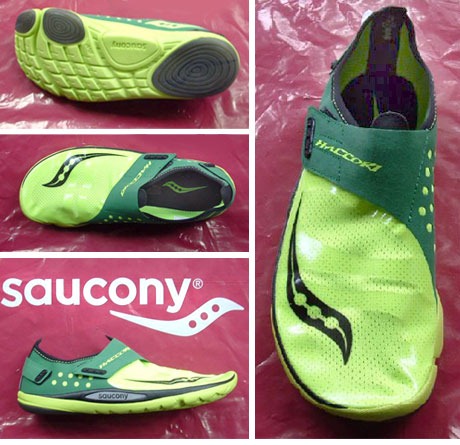 “The first things that surprised me were the weight of the shoe, the lack of a heel-to-toe drop and the lack of support elements under the foot. However, after a short period to get accustomed, I found it very easy, nearly natural, to run with the Hattori. The Velcro straps, on the top and behind the heel, provide reassuring adjustments so the feet don’t walk away from the shoe. The insert under the heel is also reassuring, particularly for minimalist running beginners. Moreover, the shoe is just so comfortable! I focused on reducing the usual length of my stride and increasing my stride frequency. Middle-of-the-foot striking came easily. I think that the Hattori is a wonderful tool to improve one’s gait and posture and I plan to use them at least once or twice a week after my usual training.“

I ran more than 300 km with my Hattoris, took part to a 10K race (40’44’’) and ran as many types of training sessions as possible: speed work, endurance work, long distance runs … only on roads and tracks for which the Hattori is perfectly tailored.

What surprised me with such an ultra-light weight shoe is that it’s as comfortable as any other Saucony shoe. As I wrote before, the mesh is stretchable so, provided you get the right size, the shoe will stick to your foot like some sort of second skin, never being tight even after a two hour run. The only negative point is that this mesh makes your foot sweat quite a lot in warm temperatures, and I recommend that you put on socks when the weather gets too nice. Another negative point when wearing them barefoot is that I got blisters on the inside of my feet, just after the big toe, caused by a hard part of the sole.

The sole of the Hattori won’t provide you the with the same ground feel as running barefoot. It’s rather stiff, although it bends easily where it is supposed to. However, this stiffness could become a problem if you plan to use them to run, let’s say, a marathon for example. I did a 2h 15min run, which exhausted my feet. One hour seems really enough. Added to this duration limit, I would also impose them a speed limit: no speed work. They’re not designed for high speeds.

This being said, running with the Hattori is a real pleasure … provided you stay under the duration and speed limits. As Marie said, it’s very easy to use them thanks to the “guiding rail” offered by the inserts under the big toe and first metatarsal. No risk of bad posture induced by the shoe even for a minimalist running beginner – your body alignment is nearly perfect. This is probably the best feature of the Hattori.

I would recommend using the Saucony Hattoris as a “tool.” A tool to start with minimalist running but also a tool for advanced minimalist runners to perfect their stride.

(Runblogger’s Note: After reading Fred’s review and his comments about the rubber elements under the 1st metatarsal and big toe serving as a “guide rail,” I began to wonder if they in fact may help create a more stable base for the big toe during push-off (rather than having just the softer EVA in that location). I’ve been curious as to the placement of these elements, and this is at least one possibility.)