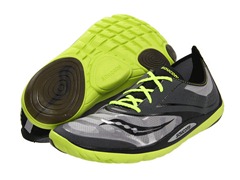 Last year Saucony released it’s first zero drop shoe: the Saucony Hattori (soon to be joined in this category by the Saucony Virrata). My review of the original Hattori was favorable, but there were two big issues that I had with the shoe.

1. It was ugly. The first time I put the Hattori on in the presence of my wife, she told me they looked like “prison loafers.” Definitely not an encouraging statement, and truth be told I agreed with her. It was definitely not an attractive shoe, and I suspect this is the reason why they can now be found super cheap at various sites on-line.

2. The velcro closure system did not provide a secure fit. In my original Hattori review from last April I wrote the following on this:

“If I had one modification I could make, I would add a mechanism to better secure the upper to the foot. The velcro straps help a bit, but the shoe needs something a bit further forward as well. Because the forefoot isn’t tightly secured, I think it allows my feet to slide around a bit and I developed hotspots on the balls of my feet behind my big toes. My skin will most likely adapt to this, but I’d suggest a velcro strap across the forefoot or a lacing system like the Vibram Fivefingers Bikila LS might help to better secure the foot in future incarnations.”

I just received a pair of the new Saucony Hattori LC (these were a personal purchase, not media samples), and have now put two runs on them totaling 20 miles. The first run was an easy six, and yesterday I did an intense run that included 11.5 miles easy followed by 8 x 0.2 mile reps at 5K pace (total of 14 miles).

Let me start by saying that the shoes feel fantastic on my feet, one of the most comfortable shoes I have worn. This alone makes them a keeper for me.

The sole remains unchanged from the original Hattori, with specs of 15 mm heel thickness and 15 mm forefoot thickness. As with the original Hattori, there is a bit of give to the sole, but they feel firmer than the Saucony Kinvara, likely due to the reduced stack height. Rubber outsole pods are in the same position as the original (see photo below), which may disappoint those who were hoping for a bit more durability under the lateral forefoot (more on these pods in a minute). Also like the original, the Hattori LC is built with an integrated sockliner that adds a bit of cushion.

The big changes with the Hattori LC are to the upper. The shoe now has a lace-up upper, and I’m happy to say that it has completely resolved the issues I had with locking down my foot in the original Hattori. This change alone makes this a dramatically improved shoe. The other big benefit to the added laces is that they improve the look of the shoe in a big way – whereas the original Hattori might turn heads due to it’s strange closure system that enhanced the paddle-like look of the forefoot, the laces make this look like a fairly typical running shoe. The forefoot is made of the same type of stretch fabric as the original, and this is a good thing – allows for plenty of toe movement and a roomy fit. The interior of the upper is lined by a soft fabric that works very well for sockless running.

I said above that I would return to the topic of the rubber outsole pods, so here goes. In the above excerpt from my original Hattori review I noted that I thought that the lack of a secure fit contributed to some abrasion and hotspots on the ball behind my big toe. Turns out I am having the same issue with the Hattori LC even with the improved closure system, and I now think it’s due to the fact that the rubber pod under this region is harder and 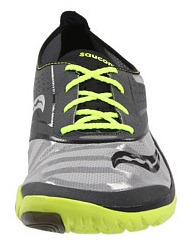 thicker than the surrounding midsole foam. I think that when I put pressure on this area during late stance phase through toe-off it doesn’t give as much. I’m pretty convinced now that this pod is the source of my problems. I will note that I am very prone to hotspots in this region of my foot, and it is issue that I have experienced in multiple shoes (though this one seems to be a bit worse directly under the ball). It also doesn’t seem to manifest until 3-4 miles into a run. That being said, it makes running long in these shoes a challenge for me, as evidenced by some pretty intense hotspots after my 14 miler yesterday. But, aside from the hotspots, the shoes handled that distance phenomenally well. Curious if anyone else has had similar hotspot issue in this shoe?

Given the comfort level that these shoes provide, I expect to use them a lot for causal wear, and for running mostly on shorter runs due to my hotspot issue (again, this might be totally a unique issue to me). I’m tempted to try and file down that rubber pod a bit because I otherwise like the shoes so much, but even as a casual shoe they will have earned the price I paid for them. Kudos to Saucony for a major improvement with the Hattori LC!

The Saucony Hattori LC is available at Zappos.