Well, I broke down and purchased a pair of Saucony Kinvara 2’s. My original pair are still in pretty decent shape, despite having run two marathons and ~200 miles on them (I don’t tend to accumulate a lot of miles on individual shoes given all of the reviews I do – these have the most of any in my current rotation). However, I figured I’d get a pair of the sequel and stick it in the closet until the first pair officially give out.

I haven’t run in the Kinvara 2 yet (I want to keep them in reserve), but from just trying them on, the feel is pretty much the same as the original. In fact, the Kinvara 2 is little changed from the Kinvara 1. Therefore, my goal in this post is simply to provide some photos of the Kinvara 2 and highlight some of the changes.

The first thing to note in the Kinvara 2 is that the outer layer of fabric on the upper seems to be a bit different – it’s hard to say for sure since I’m comparing to a well-used pair of 1’s, but the material feels a bit more “plasticy” and more durable than that on the Kinvara 1. This could help with forefoot tearing issues some people have had with the upper on the original Kinvara. 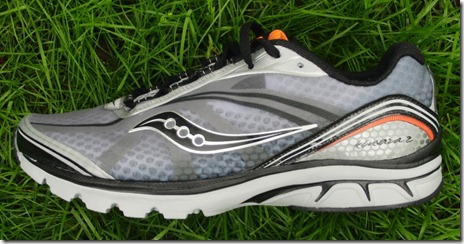 Internally, the Kinvara 2 has a new layer of mesh that was not present in the Kinvara 1. This is easily seen in the comparison images below, and should help keep dust and small debris out (personally have not had much problem with this). It might also help with sockless running comfort. 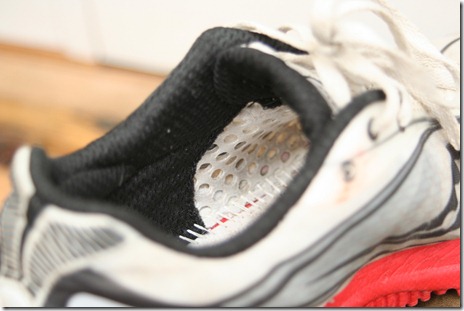 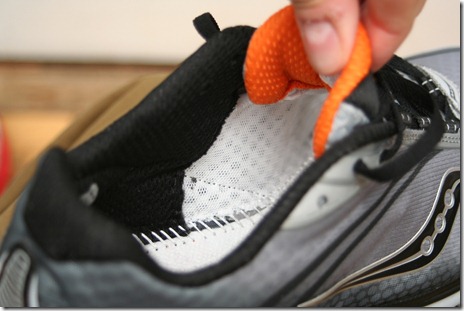 As for the sole, the basic construction and feel seem to be very similar between the two models, and the 4mm drop (without the insole) appears to be the same based on my measurements. I forgot how squishy the sole is in a new pair of Kinvaras, and based on the difference in feel between this and my old pair, it seems apparent that this changes with use. When looking at the two shoes side by side, it does seem as if the sole of my original Kinvara is wider than that of the Kinvara 2 (see photos below). Measuring across the forefoot in the same spot on both shoes, I get 117.2 mm for Kinvara 1 and 109.7 mm for Kinvara 2. For the heel, I get 90.7 mm for Kinvara 1 and 86.2 mm for Kinvara 2. In a post from a few months ago, the Running Warehouse blog stated that “The midsole, outsole, heel drop, all the good things that people have come to love about the current Kinvara remain unchanged” in the Kinvara 2. If this is the case, then the increased width of the sole in my old pair must be due to midsole compression that has flattened and widened the EVA (incidentally, here’s a cool post on EVA breakdown from the UVA Speed Clinic). The pictures below demonstrate differences in the soles quite well. Would be interesting to measure a fresh pair of the original Kinvara and see if they match up better. Finally, my Kinvara 2’s weigh in at 8.1 oz in size 10.

In summary, the Kinvara 2 is mostly a cosmetic update with a few added features in the upper. As I said at the beginning of this post, I have not run in the Kinvara 2 yet, but given the lack of major differences, I expect performance would be the same (you can read my review of the original Saucony Kinvara here). I’d still like to see Saucony widen the forefoot just a tad and add some rubber under the lateral forefoot for those who scuff this area, but all in all I’m glad that they didn’t change much in what has been one of my favorite shoes.

The Kinvara 2 is available at Running Warehouse (click banner at bottom of post), and can also be purchased for 20% off + free shipping (until May 31) from Shoes.com.

Sole of the Saucony Kinvara 2 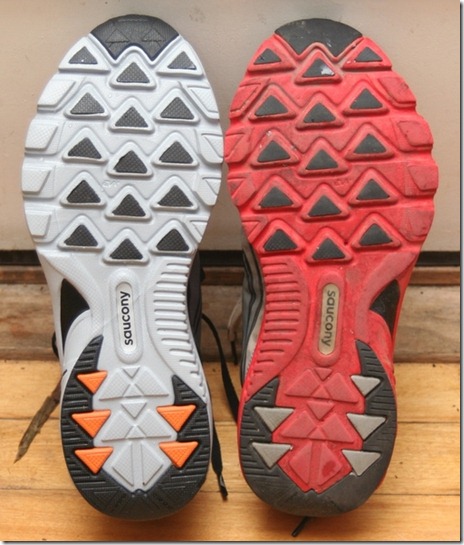 Comparison of soles from the Kinvara 2 (left) and Kinvara 1 (right). Note the increased sole width in the Kinvara 1. Note the respectable condition of the Kinvara 1 sole after 200 miles – I started running in these before transitioning my gait, so there is some heel wear, but I used to chew through heel outsoles by 200 miles. Because the Kinvara is so cushy, I’m sure I still do heel strike in them frequently when not concentrating on gait. Sole wear is mainly due to friction, and my feet tend to be moving backward by the time I land, so I see much less wear overall in all of my shoes than I used to. 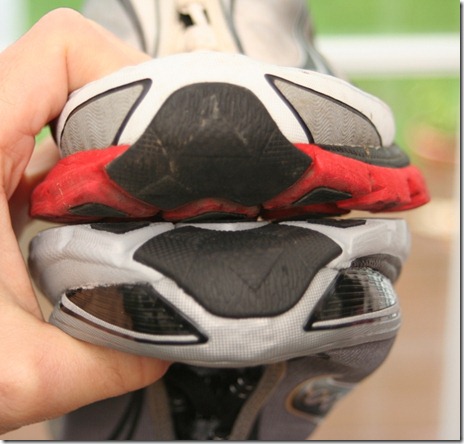 Comparison of soles from the Kinvara 2 (bottom) and Kinvara 1 (top). Note the increased sole width in the Kinvara 1. 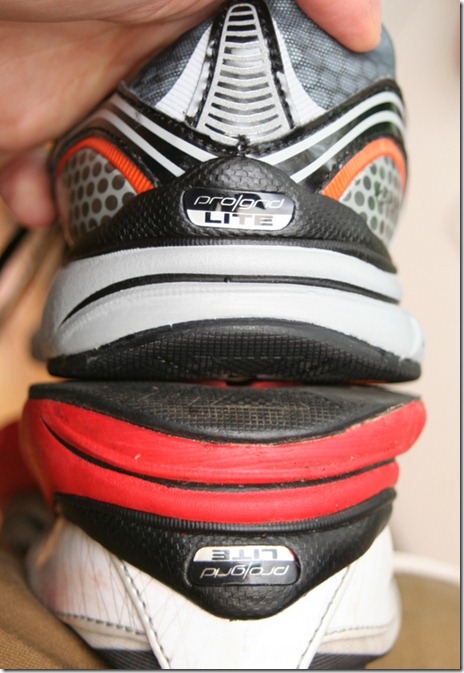 Comparison of soles from the Kinvara 2 (top) and Kinvara 1 (bottom). Note the increased sole width in the Kinvara 1.