Competitor.com just posted two photos of the Saucony Kinvara 3. The third iteration of the popular Kinvara, which is set to be released in Spring 2012, looks to be a bit more of an update to the original than the Saucony Kinvara 2, which mostly saw just a few tweaks to the upper. My contact at Saucony informed me that these photos are not necessarily the final production shoe, and that some changes might still be made. In any event, given the popularity of this shoe and my own very positive personal history with it, I thought I’d share the photos here.

As the photos below show (Saucony Kinvara 2 above, Saucony Kinvara 3 below), the upper looks to have undergone a more significant update, with what appear to be welded overlays extending in a striped pattern down the length of the shoe. It also looks as if the sole under the back of the heel has been sculpted a bit so that it does not extend as far back behind the heel counter. The 4mm heel-forefoot sole differential has been retained, though the geometry of the “lugs” under the forefoot looks to be a bit different. 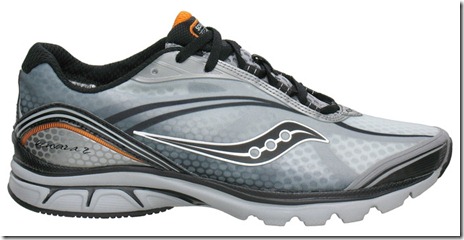 The next two photos highlight the difference in outsole construction between the Kinvara 2 (top) and Kinvara 3 (bottom). As you can see, Saucony reduced the amount of rubber outsole on the medial side of the heel, and also reduced the number of triangular outsole lugs under the forefoot. It does not look like any rubber has been added under the lateral margin of the forefoot, which will be a disappointment to those who tend to chew up this region (I personally have not had a problem with durability in this area). That’s about the extent of what I can tell just from comparing photos, but I’ll hopefully be able to post more once I get my hands on a review pair, which hopefully will not be in the too distant future!