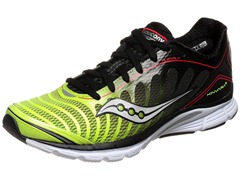 I’ve done something rather unusual for me this past week plus: I’ve run over 40 consecutive miles in the same shoe. Given the size of my shoe collection and the number of active reviews I’m typically working on at a given time, it’s extremely rare for me to go even a few consecutive runs in the same shoe. But, I have a lot of history with the Saucony Kinvara, and the newest iteration keeps what I liked best about versions 1 and 2, and improves on previous models in some subtle ways that in my opinion make this the best Kinvara yet (disclosure: these shoes were pre-release media samples provided free of charge by the manufacturer).

In case you haven’t read my previous Kinvara reviews, this shoe has been my go-to marathon shoe for my most recent two races. It’s the shoe that I wore when I earned my Boston qualifier and marathon PR, and it’s the shoe that I wore in the Boston Marathon in 2011. After putting almost 50 miles on version 3, I can quite honestly say that if I were to run a marathon tomorrow they would once again be the shoes on my feet. The Kinvara just works extremely well for me, and I feel fortunate to have found a running shoe that seems to be a near perfect match for my body.

My review of the original Kinvara was one of the longest shoe reviews that I have written, and since the Kinvara 3 is really not a huge departure from the formula that made that such a great shoe for me, I’ll refer you there and not rehash all the nitpicky details. Rather, I’ll focus here on what has changed in the Saucony Kinvara 3 and why I feel the shoe is an improvement.

The most notable update in the Kinvara 3 is that the forefoot feels just a tad roomier than in previous versions. I went back and forth on whether the sensation was real or not, then finally just decided to ask Saucony if they had made any changes up front. I was told that forefoot width is the same, but that they increased the volume of the upper in the forefoot just a tad. It’s a very positive change(while talking about the forefoot fit, it’s worth noting here that the Kinvara 3 is available in widths for those with wide feet).

The other noticeable difference in the Kinvara 3 is that the forefoot feels a bit springier. It’s kind of an odd sensation, almost as if there were a narrow Newton-like set of lugs underneath my metatarsal heads. I’m not sure if it’s due to the placement of the added rubber on the sole, but there is definitely a different feeling under the forefoot compared to previous models. Once again I find this to be a positive change

Other changes to the new Kinvara include the addition of a bit more rubber under the lateral outsole (see image above and left and video below), though still not along the entire length of the forefoot. This will hopefully improve durability, but I personally have not had an issue with premature wear in the Kinvara (my buddy Thomas at Believe in the Run used to trash the Kinvara forefoot, but has found version 3 to be more durable – you can read his Kinvara 3 review here). The upper is completely redone, and it looks and feels great. The shoe is very breathable, and sockless running has caused me no blistering or hot spots. Finally, the heel is a bit more rounded off or beveled than in previous versions – I’m a fan of undercut heels on shoes, but this one is not as exaggerated as in the Brooks Pure series or New Balance Minimus Road (I would not be disappointed if they took a bit more off in future versions).

In most other respects this is a shoe that previous Kinvara wearers will find very familiar. Same 4mm drop sole (23mm heel, 19mm forefoot), similar fit through the heel and midfoot, similar light weight (7.9 oz). Saucony was wise not to mess too much with this shoe, but in making the changes they did they managed to in my opinion make the shoe better. It’s a solid update, and the Kinvara remains my distance shoe of choice!

The Saucony Kinvara is now on version 4, but some old v3’s can still be found at Running Warehouse.