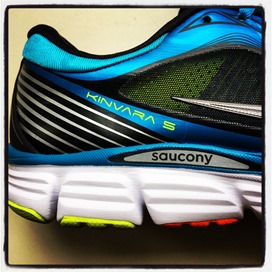 The Saucony Kinvara is one of my favorite running shoe models. It’s basically everything that a shoe should be – pretty simple in construction, lightweight, and relatively inexpensive compared to other shoes on the market. I’d go so far as to rank the original Kinvara up there among my favorite shoes of all time – I ran my BQ in that shoe, and then ran Boston in it as well. It’ll be one of those shoes that always holds a special place in my memory.

I continued to enjoy the Kinvara in its second and third iterations, but the wheels kind of fell off for me with v4. The sole still felt great, but the fit was way off – very tight and restrictive at the front of the toebox. In my review of the Kinvara 4 I wrote the following: “…the Kinvara 4 is a step back for Saucony, and unless you have narrowish feet or don’t mind a lack of toe freedom they aren’t going to be a great choice. And durability is a potential issue for the forefoot upper.” It was not a shoe I would choose to run long in, and I’d seen/heard of enough people experiencing tears in the upper that I was hesitant to even recommend them to those with narrow feet.

I usually aim to put about 30 miles on a shoe before writing a review. I can usually peg a shoe after 1 or 2 runs, but 30 miles gives me time to break the shoe in a bit and get a good feel for it on various types of workouts (there are times when my impression changes after a few runs – the Pearl Izumi Road N1 being a good example). However, I’ve been asked a bunch of times in the past few weeks if I’ve tried the new Kinvara 5. The questions, particularly regarding fit, were frequent enough that I wanted to get some thoughts up as quickly as possible to point people to.

Saucony sent me a pair of the Kinvara 5 last Friday (Disclosure: these shoes were media samples provided free of charge by the manufacturer). Fit can be addressed by simply trying a shoe on, but I wanted a bit more from this post so I ran 11 hilly miles in them yesterday, enough to get a good feel for the shoe. If a double digit run in a brand-new shoe goes well, it typically bodes well for how the shoe will continue to perform. I plan to add more miles in the coming week (Update 5/19/2014: I have now run a bit over 40 miles in the Kinvara 5, you can read my updated thoughts here).

Let’s get to the big question right off the bat – how does the Kinvara 5 fit?

I’m happy to report that Saucony has fixed the fit issue I had with the Kinvara 4. I’d go so far as to say that the Kinvara 5 has a spacious fit in the forefoot. I feel no forefoot or toe squeezing, no unusual pressure. It’s a very comfortable shoe. I did opt to go for a size 10.5 as I did in the K4, and I think it was the right choice – I have about a thumb width in between my big toe and the tip of the shoe (I wore a 10 in Kinvara v1-v3).

The upper of the Kinvara 4 was composed of a tight, plasticy kind of mesh that is prone to tearing with repeated flexion. It had very little give, and I think that contributed to the fit issue with the shoe. The Kinvara 5 swaps out the mesh for a stretchier, thread-like mesh (I don’t know fabric terminology!) similar to that found on the Saucony A5. It’s very breathable, and I suspect it will hold up much better over time (in all of the photos below the red shoe is the Kinvara 4, the blue shoe is the Kinvara 5). 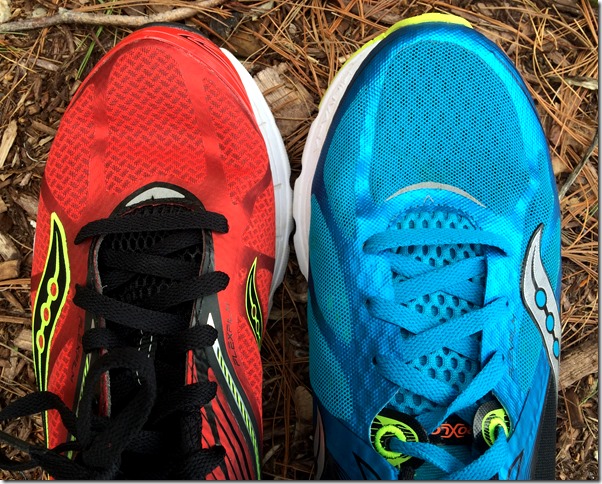 In the Kinvara 5 Saucony added a feature they are calling PRO-LOCK to the upper. PRO-LOCK consists of a triangular piece of material that extends from the sole up the midfoot on either side of the shoe. It’s sandwiched in between the outer mesh and a soft piece of interior mesh that attaches to the tongue. There is a lace hole at the apex of the triangle, and the intent is that PRO-LOCK will cradle the midfoot on each side for a more secure fit (you can see the yellow PRO-LOCK lace holes in the image above). I’m kind of ambivalent about this feature – you do sense the wrap when lacing tightly, but the triangle on the inner side bends and causes the upper to pucker outward away from the arch when you roll inward. I might just need to play with the lacing a bit to dial it in.

A third change to the upper is that Saucony beefed up the ankle collar with a bit more cushion and a softer lining (see photo below). I really like the feel of the new collar, and the same material also lines the underside of the tongue. I think the beefing up of this area might be part of the reason why people have said the K5 looks a bit more trainery than previous versions. The height of the internal plastic heel counter has been increased a bit, but it didn’t bother me (it’s pretty flexible, not hard plastic). 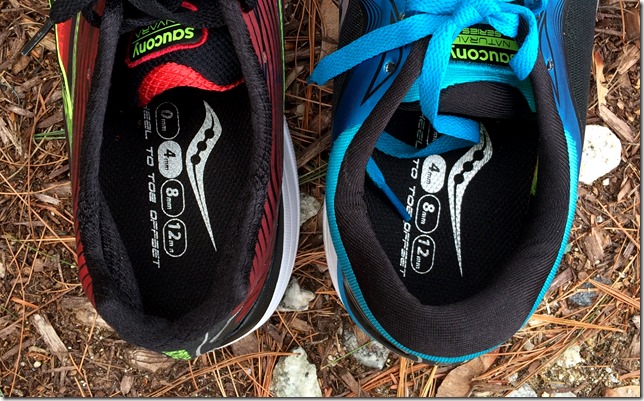 The sole of the Kinvara 5 has been changed from v4 to v5. The shoe is still 4mm drop, and Saucony reports weight at 7.7oz in men’s size 9. Saucony describes the new sole as follows: “The Kinvara 5 midsole/outsole platform is also new, and made from an enhanced EVA+ material with better abrasion resistance than ever before. On the outsole, we also added small placements of iBR+ rubber to provide more durability and cushioning on the outer side of the foot, where heavy wear is typical for many Kinvara fans.” 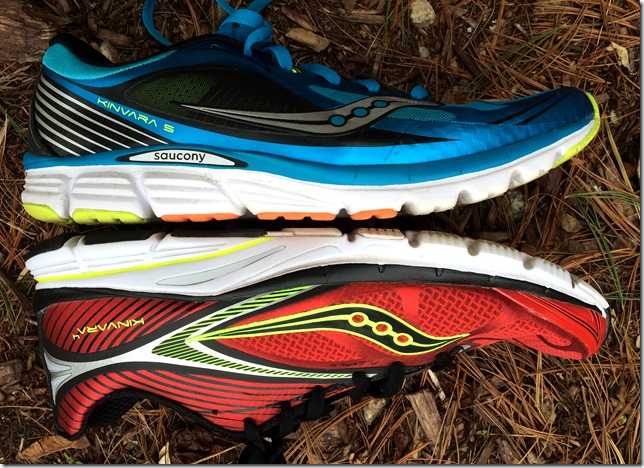 My sense is that the shoe feels a tad softer than v3-v4, almost more like the original Kinvara (Thomas over at Believe in the Run reported a similar feeling in his Kinvara 5 review). I like a softer shoe, and it felt great over the 11 asphalt miles that I covered yesterday. I did feel a minor bit of irritation along the inner ball of my right foot as sometimes happens in softer shoes, but it never progressed to a blister or pain. More of an awareness, and is something I’ll keep an eye on over additional miles.

The outsole has been modified slightly – it’s easier to demonstrate with a photo than to describe in words: 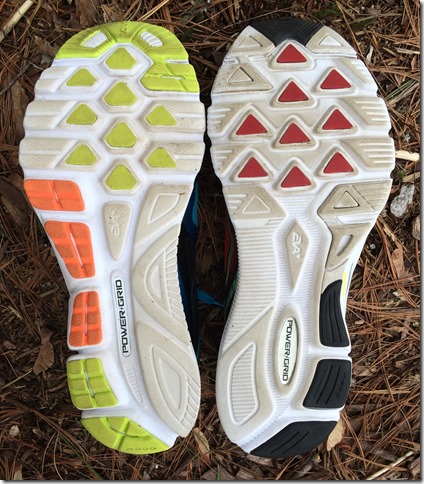 Still no rubber up along the lateral forefoot – wear in this area has not been an issue for me, but I know that some forefoot strikers tend to chew the soles up in that region. I’m wondering if the added softness I feel is due to the fact that the outsole patches on the heel and midfoot (yellow and orange rubber in the photo above) are attached to EVA pods that extend a bit further out from the sole than in the Kinvara 4? Hard to describe this in words.

My initial response, and this is based on one 11 mile run so keep that in mind, is that the Kinvara has once again become a top pick among lightweight training/distance racing shoes (Update 5/19/2014: I have now run a bit over 40 miles in the Kinvara 5, you can read my updated thoughts here). If I were to run a marathon this Fall (still not discounting the possibility entirely), it would be a frontrunner for race day alongside the New Balance 1400v2, adidas Adios Boost, and maybe the Skechers GoMeb Speed 3 (due out in November). It probably has the most generous forefoot fit of any of those mentioned, and feels like just a bit softer under the forefoot compared to the others.

My plan going forward is to put another 25 or so miles on the Kinvara 5 in the next week and update this review with any further thoughts. My only real concern so far is the faint hot spot I felt on the ball of my right foot, but that’s likely an issue that results from my gait and not something that will happen to everyone (it happens to me frequently in soft shoes). As of right now I can highly recommend the Saucony Kinvara 5, feel free to ask any questions you might have in the comments!

The Saucony Kinvara 5 is available at Running Warehouse, Zappos, and Amazon.com. Outside of the US they can be purchased at Wiggle.

For another take, read Thomas Neuberger’s review of the Saucony Kinvara 5.