A few weeks ago I published a first impression review of the Saucony Kinvara 5 after taking them out for an initial 11 mile run. I’ve now run a bit over 40 miles total on the shoes, and I just returned from a 14 mile run in them earlier today. I though I’d share a brief update on my experience with the shoe.

First off, I’ll say that pretty much everything positive I said in the initial Kinvara 5 review still holds. The toebox on the K5 is fantastic – it fits my foot perfectly, and may be the roomiest of any iteration of the Kinvara. The sole has just the right amount of cush for my taste, and they have performed great on two 10+ mile runs and several shorter runs. I’d have no hesitation using these in a marathon – in fact, if I run one this Fall they are likely the early frontrunner for race day (still deciding on Fall races…).

The only real negative issue I encountered on my first run in the Kinvara 5 was some abrasion leading to hot spots on the outsides of both big toes. I’m happy to report that this issue has not recurred – I felt no discomfort in this area over 14 hilly miles earlier today.

Some people have asked me about the puffy tongue and more plushly cushioned ankle collar in the Kinvara 5 – neither have bothered me at all. In fact, I like the added padding in both areas. I have also seen some comments about the ankle collar feeling high/tall in this shoe. Again, not an issue for me so far.

Finally, sole wear has been an issue in previous iterations of the Kinvara, particularly along the lateral forefoot. I’m a mild heel striker so most of my wear is on the heel, nothing unusual to report here: 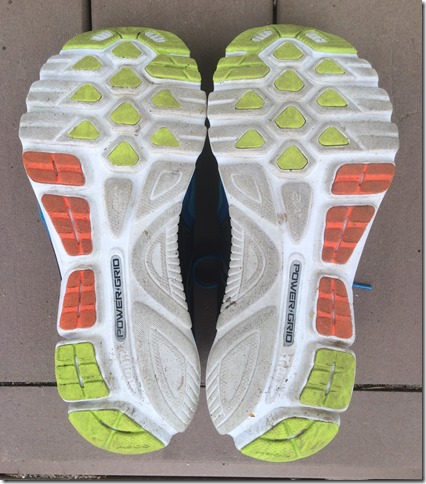 After 40 miles in the Kinvara 5, I’m pretty confident that they will wind up on my list of top shoes of 2014. I might go so far as to say that this is my favorite Kinvara so far. After a disappointing iteration in v4, my old friend has returned in top form – the Kinvara is back!

The Saucony Kinvara 5 is available at Running Warehouse, Zappos, and Amazon.com.

Outside of the US they can be purchased at Wiggle.