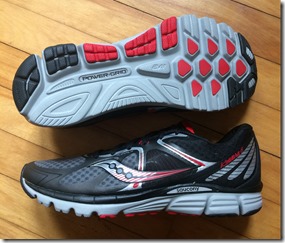 Normally an update to a shoe like the Saucony Kinvara would warrant a quick review from me. The model has historically been a personal favorite, and I look forward to trying out each new iteration. The Kinvara 5 was a great update, and on paper it seemed like changes to the v6 would be minor (upper only, same sole).

I purchased a pair of the Kinvara 6 just after they were released, but after a few times wearing them I noticed that I was getting some pressure over the base of my little toe on each side, in the region near the front of the Saucony logo on the outer side of the shoe. It was uncomfortable enough that I shelved the shoes for a few months and moved on to some other models that I was excited to try (namely the New Balance 1400 v3 and the Asics DS Racer 10).

A few weeks ago I decided to give the K6 another try, but the discomfort was still there. In a last ditch effort to make them work, I swapped out the insole for a thinner one from the Nike Free 4.0, and that seemed to do the trick. The thinner insole created just enough room to relieve the pressure, and I’ve now been running in the Kinvara 6 for several weeks.

There’s really not a whole lot to say here that was not already said in my review of the Kinvara 5. The sole remains unchanged, and the ride is the same that you expect from the Kinvara. It’s a lightweight shoe (7.8 oz in men’s size 9) with a semi-soft sole that can handle both speed and long distance. The heel isn’t quite as soft in the newer versions as I recall in the early Kinvaras (or compared to, say, the NB 1400), but it still works well for me now that I’ve dealt with the fit issue.

The Kinvara is still a 4mm drop shoe with stack heights of 22 mm heel and 18 mm forefoot. Outsole coverage is adequate for my wear pattern, though still no rubber on the outer forefoot so forefoot strikers may have durability issues with this shoe.

The major change in the Kinvara 6 is the upper. Gone is the somewhat baggy, thinner upper of the Kinvara 5, and in its place we have a sturdier mesh upper. Both versions rely primarily on welded overlays for support, and the K6 upper feels just a tad snugger to me (perhaps why I had trouble with pressure in the outer forefoot). The K6 retains the Pro-Lock system that wraps the midfoot, so those who did not like that addition to K5 should keep that in mind. I have no had issues with this feature in either shoe, but know that some have complained about it. I will say that I think the K6 is a better looking shoe than the K5, and it may be my favorite Kinvara based solely on appearance – credit to the design team on a job well done!

Overall, the Kinvara 6 is pretty much the same shoe as Kinvara 5, hence the abbreviated review. It fits snugger, and if you have a high volume foot like me you may to create a bit more space with an insole swap, and the upper seems a bit more durable. As mentioned, the sole is the same, so ride should not differ at all. At an MSRP of $100 (though it can typically be found for less) the Kinvara remains one of my top recommendations for an all-around shoe at a reasonable price.

For another take on the Kinvara 6, check out this review over at Believe in the Run.