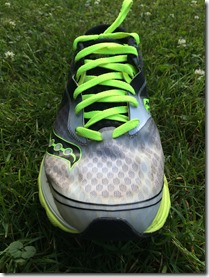 The Saucony Kinvara has long been a top option for me among low-drop, lightweight training shoes. I’ve run marathons in the Kinvara, and have had positive experiences with most iterations of the shoe that have come out. Since the arrival of the Kinvara 7 a few months ago, I’ve heard a lot of mixed opinions about the newest version of the shoe . Some have suggested that it’s lost some of it’s magic by becoming a more traditional-style shoe, whereas my friend Thomas over at Believe in the Run says it feels pretty similar to v6.

I tend to agree with Thomas here – though both the upper and sole have been changed in v7, the shoe retains the essence of what the Kinvara is. It’s still a lightweight (sub 8oz in size 9), affordable ($110 MSRP), 4mm drop shoe (22mm heel, 18mm forefoot) that is suitable for both speed and longer distances (specs via Running Warehouse). As someone who prefers less shoe underfoot, the Kinvara is more of a distance trainer and marathon racer for me, and v7 still fits that bill quite nicely. 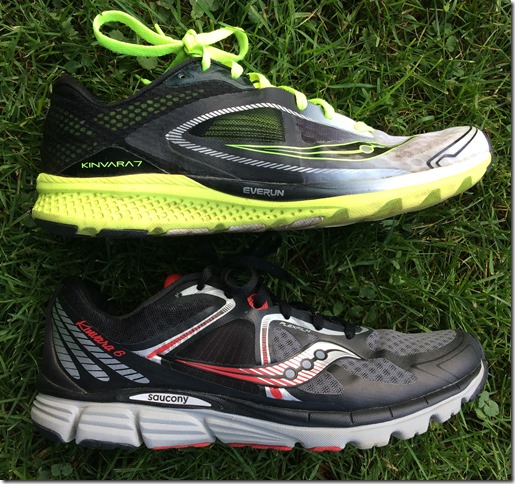 The upper of the Kinvara 7 is really pretty similar to that of the previous version. The mesh has changed slightly, overlays have been moved around, and the Saucony logo has been shifted forward toward the forefoot (similar to what Brooks has done on some of their shoes). But in terms of fit, function, and comfort, there really isn’t much noticeable change. In most ways, it’s still a fairly simple, minimally structured upper (for example, the heel counter remains very soft and flexible). Saucony did opt to keep the Pro-Lock wrap around the midfoot – I honestly don’t have a preference one way or the other about it, but my general feeling is that it doesn’t do much (similar to the Brooks PureProject NavBand), and could therefore be eliminated to shave a bit of weight and simplify the shoe. 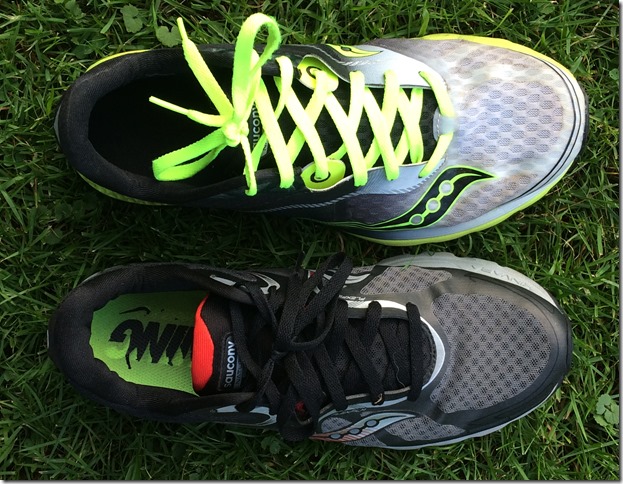 Perhaps the biggest difference I noticed in the Kinvara 7 is the fit (note: I always go 1/2 size up in the Kinvara). K6 fit me well, but the forefoot of K7 feels downright spacious to me. It may be the roomiest forefoot I have felt in any version of the Kinvara. Midfoot and heel lock down well, and this is one of the better-fitting shoes I have tried in awhile – would be a great option for swelling associated with longer distances for my feet (I’ve probably run over 70 miles in them, but long runs maxed out a 7-8 miles). 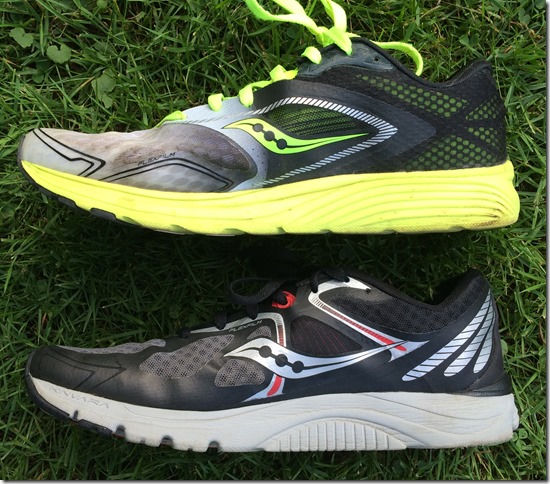 The big thing that Saucony is touting about the Kinvara 7 is the addition of a wedge of Everun cushioning in the midsole under the heel. From what I gather, Everun is similar to the adidas Boost compound – Saucony claims increased energy return, and better resistance to breakdown over time. To be honest, I couldn’t feel the stuff at all. I tend toward a mild heel strike with most loading under the midfoot, so my stride isn’t always the best to assess heel cushion. If anything, and this may be my biggest complaint about the Kinvara 7, the sole felt a bit dead to me. The Kinvara 7 does not feel springy like the adidas Adios Boost, moreso like the RevLite material used in some New Balance shoes. And it doesn’t feel quite as soft as previous versions of the Kinvara – I’m liking the ride of the New Balance Zante 2 better right now for longer distances for this reason. I’d be curious to try a shoe with a sole made entirely of Everun – as it is now, you likely won’t notice much unless you really pound the heel. 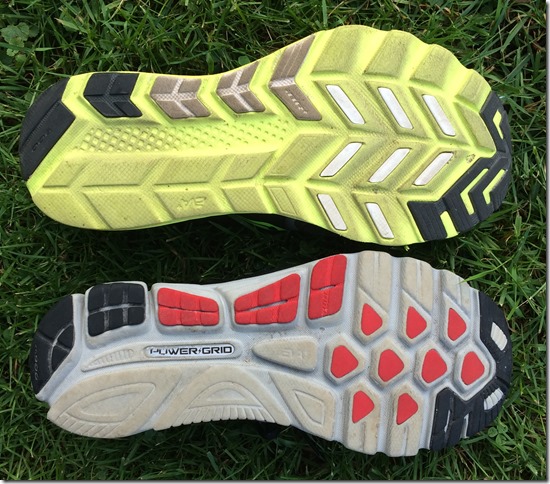 The outsole of the Kinvara 7 has changed from triangular patches under the forefoot, to a chevron-like pattern. Still no rubber along the outer margin of the forefoot, so durability might be an issue there for some, but mine look pretty solid still after 70+ miles. My guess is only extreme forefoot strikers will have major durability issues due to lack of outsole coverage.

I don’t feel like the Kinvara 7 has strayed far from previous versions. Weight, stack height, etc. all remain very similar. The Kinvara 7 stands out for me due to the spacious forefoot, and with regard to fit, it’s a shoe that disappears on my feet. I would not view the addition of Everun in the sole as a major selling point, and the sole actually felt a bit dead to me – Sacuony may want to extend the material further into the forefoot to see if that improves the ride. For me, the Kinvara 7 remains a solid option among lightweight distance shoes, but I’m finding that the New Balance Zante 2 may have surpassed it in terms of overall ride for my stride in this category.

The Saucony Kinvara 7 is available for purchase at Running Warehouse.