Saucony Mirage 4 Running Shoe Review: Good Choice if You Like a Firm Shoe 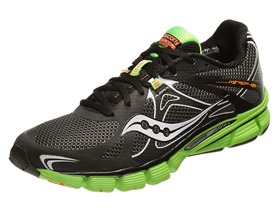 I’ve been struggling a bit with how to approach this review of the Saucony Mirage 4. On the one hand, there is a lot that I love about this shoe. On the other hand, it’s simply not been a good match for me. As such, this is going to be a review in which I’ll be very honest in describing what I personally did not like about the shoe, but I also feel that a lot of people will probably like it a lot. I’ll do my best to clearly describe the pros and cons so you can decide if it might be a good fit. (Disclosure: these shoes were a media sample provided free of charge by Saucony)

Let’s first walk through three things that I really like about the Saucony Mirage 4.

When I first saw the Mirage 4 I was immediately impressed by it’s appearance – it’s a really great looking shoe. It’s rare that I would buy a shoe solely due to its appearance, but if I were not a runner and I walked into a store to buy a casual sneaker, this is one that would immediately catch my eye. Saucony has done a great job of improving the aesthetics of the Mirage from version 3.

The Mirage 4 fits my foot perfectly. I sized up to a 10.5 as I do in almost all Saucony shoes, and the fit is like it was made for my foot. I had major issues with the fit of the Saucony Kinvara 4 (too tight at the front of the toebox), and the Mirage 4 is spacious by comparison – plenty of toe wiggle room. Let’s just say if the Kinvara 5 shares a similar fit to this iteration of the Mirage I’ll be a very happy guy.

The upper of this shoe is really, really nice. Lots of flex-film overlays to provide structure without being overbearing, a non-abrasive internal lining, and I like the mesh they used (with one exception, which I’ll get to in a minute). I particularly like the material they used to line the ankle collar – super soft and comfortable.

I should point out that this shoe has a substantial and pretty stiff heel counter. Didn’t bother me any, but some people have trouble with heel counters so it is worth mentioning.

I have had one issue with the upper – I think it’s mainly cosmetic, but I’m curious if others have noticed this. I noticed after not too many wears that the upper on the inner side of the foot just in front of the arch seemed to have some abrasion/fraying (happening on both left and right shoes). 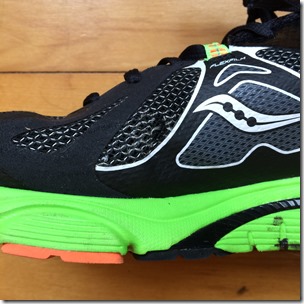 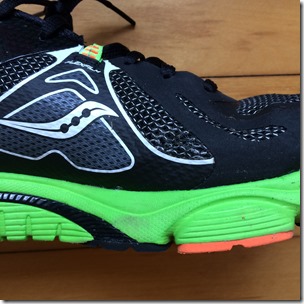 It got progressively worse over the course of a few weeks (used the shoes for casual wear a bunch in addition to runs). I think what is happening is that the welded overlay just behind the site of abrasion causes the upper to pucker in this area when the shoe flexes. This has frayed the white thread woven into the upper, but the actual black structural upper mesh seems to be fully intact. It may be that this is just cosmetic since the white thread is very fine, but it’s something to keep an eye on.

Now for the negative for me, and this saddens me because I really want to love this shoe – it looks great and is super comfortable. Unfortunately, the sole and I just aren’t getting along.

The Mirage is the “stability” model in Saucony’s “natural running” collection of footwear, and stable is indeed a good word to describe it. The sole of the Mirage 4 is very, very firm, and pretty stiff. Stiff, firm soles and I don’t generally get along unless the shoe is a racing flat with a small stack. The stack height of the Mirage 4 is 24mm heel, 20mm forefoot, so not terribly thick, but thick enough that combined with a firm feel it just does not work with my stride. I prefer a shoe with a bit more cush and my runs in the Mirage have felt jarring. So much so that after 5-6 runs in them I decided to pull the plug on further runs and admit defeat (strangely, my hamstrings were sore after a few of my runs in them, still trying to figure that out…).

At first I thought maybe the soles were just hard because of the cold weather in NH. EVA foam firms up in the cold, so this seemed like a reasonable possibility. To test this theory, I brought the Mirage 4 with me to Florida and ran several times in the summer-like warmth. Did not help. I wondered if maybe they needed to be broken in a bit so I wore them most days at the parks while at Disney – maybe 20-30 miles of walking. No difference. I’ve concluded that this is just a firm shoe, and it’s not a good match for me.

As far as stability elements go, the Mirage has a plastic arch built into the arch. Not sure how effective it is, and can’t say I noticed it. The shoe is firm enough that I don’t think I compressed the medial midsole much.

I want to be very clear that a lot of people will probably love this shoe for its firmness. I had similar issues with the Mizuno Sayonara for example and a lot of people I know love that shoe. Some runners on the Gear Institute forum also commented on the firmness of this shoe, but some of them really liked it for that reason. We all have slightly different body types and strides, and our reaction to a given shoe is highly variable. If you like a firm shoe, I’d very much recommend that you try this one as in almost every other respect I have found it to be fantastic.

If you’re looking for a firm, stable, roomy shoe to eat up miles the Saucony Mirage 4 is a great choice. Just keep an eye on the upper in the medial forefoot. It’s a bit too firm for me as a running shoe, but I’ll likely keep my pair for causal wear since it’s a slick-looking shoe.

The Saucony Mirage is available for purchase at Running Warehouse, Zappos, and Amazon.com. Outside of the USA it can be purchased at Sportsshoes.com.