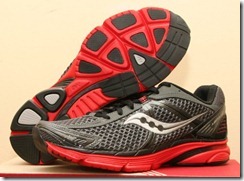 Over the past week I’ve posted reviews of two low-drop shoes from Saucony – the 5 mm drop Fastwitch 5 and the zero drop Hattori. Next up is the Saucony Mirage (disclosure – these were free media samples provided by the manufacturer). Of these three shoes, the Mirage is probably the most similar to the Saucony Kinvara, which I rated as one of my favorite shoes last year. The Mirage is clearly a product of the market success of the Kinvara (apparently the Kinvara was Saucony’s 3rd best selling shoe last year), and it targets a segment of the running community who might fear running in a soft, neutral shoe like the Kinvara (fears that I personally think are unwarranted).

The Mirage is a solid looking shoe. I have the Black/Gray/Red version, and it is definitely one of the better looking shoes in my rotation (albeit not flashy). No issues for me here.

In my opinion, the Mirage is essentially a beefed up version of the Kinvara. It has a more traditional and substantial upper, a larger heel counter, and a lot more cushioning around the ankle. The drawback of the upper is that it adds weight, but the benefit is that it should be more durable – I have seen a number of people complain about tears developing in the outer fabric of the Kinvara upper (this should be fixed by a new type of fabric in the Kinvara 2). Despite the beefier upper, the Mirage is still a fairly lightweight shoe, coming in at around 9.8oz in my size 10.

Internally, the Mirage differs from some of my other Saucony shoes in having a flat insole with no added cushion in the heel. The level of arch support is similar to the Kinvara, as is the overall fit. This is by no means a wide shoe, but it fits my average width foot pretty well.

The sole of the Mirage also feels somewhat similar to the Kinvara – they both use a relatively cushy type of EVA known as Progrid Lite. The major difference is that in the Mirage there is a small amount of medial support in the form of a curved plastic wedge underneath the arch – this can easily be seen (in black) in the image above. The added medial stability isn’t really all that noticeable to me on the run, but might make this shoe a bit less scary to those thinking about moving from stability trainers into a transitional shoe on the way to more minimalist offerings. In terms of heel-forefoot drop, the Mirage mirrors the Kinvara in being about 4 mm drop (without the insole). The one other difference when comparing the sole of the Mirage to that of the Kinvara is that there is a bit more rubber outsole on the Mirage – this may add a bit of added durability to this shoe.

I actually like running in the Mirage more than I initially thought that I would. I was concerned that the weight and stability elements would bother me, but they have not been that much of a problem. I think the fact that the sole feels very much like that of the Kinvara makes me feel at home in the Mirage, whereas the firm sole of the Saucony Fastwitch 5 was a bit of a turnoff for me (I’ve put more miles on the Kinvara than any other shoe over the past year). I’ve run as many as 15 miles in a single run in the Mirage, and have no major complaints. I probably will not be logging big miles in the Mirage going forward, mainly because I prefer less shoe, but it’s definitely a solid step in the right direction away from more traditional trainers.

The Saucony Mirage is a great choice as a step-down shoe for those who are looking to get out of traditional stability trainers and aren’t yet ready to take the plunge into something neutral like the Kinvara. It shares a lot of similarities with the Kinvara – similar drop, similar fit, similar feel underfoot, but is an all around beefier shoe in a number of ways. It’s also likely to be a more durable shoe than the Kinara. The Mirage would be a reasonable choice if your goal is to make a very slow transition to more minimalist offerings.

For an alternative viewpoint, check out this Saucony Mirage review by my friend Thomas at Believe in the Run.