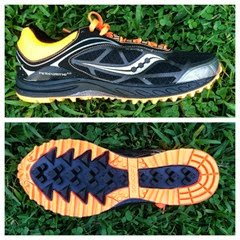 My last two runs have been mostly on trails down by the Merrimack River. I like those trails for shoe testing since they include lots of surface variety – sand, a bit of mud, roots, rocks, leaf cover, etc. There’s also a good stretch of crushed rock that I can take if I decide to go the back way home through the woods directly behind my house – this section is great for testing the protective properties of a trail shoe.

On my run yesterday I wore a pair of ultralight racing flats (Asics Blazing Fast) rather than trail shoes. Running trails in a shoe like that is fun, but requires a greater amount of concentration on the ground since a misplaced step on a sharp rock or root can be painful. But, when I do catch a rock, I feel like I maintain better ankle control in a shoe with a thin, flexible sole. I opted to skip the crushed rock and head home on the road since it would have been uncomfortable terrain in the flats.

Today I ran mostly the same route in the Saucony Peregrine 3. The contrast was quite striking. Whereas the flats made me feel nimble and more alert, I felt like a tank in the Peregrines. I could tune out a bit and cruise along while stepping on rocks and roots without worrying too much, and the crushed rock was no problem. However, since the sole of the Peregrine is firmer and less flexible, catching the tip of a rock on the inner or outer margin can torque the ankle to a greater degree than in a softer, more flexible shoe. This is a tradeoff I observe frequently in trail shoes. Foot protection traded off for increased risk of rolling an ankle. 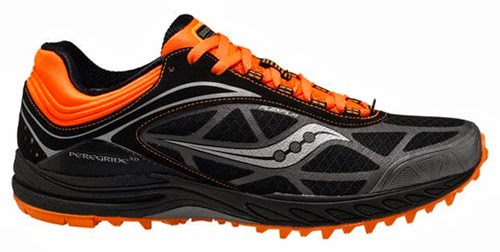 For the most part, I’ve enjoyed all of my runs in the Peregrines. I’ve done most of my miles in them on trails – I was using them a lot before I decided my training was not up to par and decided to skip the Vermont 50K. My longest single run in the P3’s was a bit over 10 miles on twisty, rocky, rooty trails with a bit of bushwhacking thrown in for good measure (I got lost in the woods…this was the run that made me realize how woefully undertrained I was for a trail 50K). If you’re looking for a fairly rugged, low-drop trail shoe they are a decent option, though I do have a few complaints. (Disclosure: these shoes were provided free of charge for review purposes by Runningshoes.com)

Among the trail shoes I have worn recently, the Peregrines are among the most protective. The sole has a stack height of 26mm heel, 22mm forefoot, they have a rock plate, and they have a full-coverage, luggy, firm rubber outsole. The sole does not appear to have changed at all since the original Peregrine, which I reviewed back in 2011 (the sole is getting an update in V4).

As described above, the sole of the Peregrine lets you run over just about everything without much risk. I run most of my trail miles in road shoes or road-to-trail hybrid shoes (I’m mostly a road runner, but I did a fair bit of trail running in August-September), and honestly these shoes feel like tanks. At over 10oz they are heavier than most shoes in my collection, and they aren’t the smoothest riding shoes on the road (the outsole is hard rubber, definitely designed for trail use). However, on the trail they fulfill their purpose very well, which is allowing a comfortable ride with good traction over rough terrain.

The upper of the Peregrine 3 is made of a thick mesh, and there is a nice layer of padding around the ankle. I have heard of a few cases of the upper tearing along the side of the forefoot, but no issues for me so far. I don’t know if it’s something about the shoe, but the upper really seems to hold a stink. After my run this morning my feet smelled horrible! This is not a common problem for me in other shoes, and it may just be that I forgot to rinse them after a particularly stinky run. Not sure…

The fit of the Peregrine is typical Saucony – fairly snug throughout. This is not a shoe with a wide forefoot, and it actually feels unnecessarily pointy at the tip. I had to take my typical approach with Saucony shoes and go a half size up to avoid a toe scrunch. That’s probably my biggest complaint about the Peregrine – I wish the forefoot was a bit wider and less pointy.

My other issue with the Peregrine is the aforementioned ankle twisting tendency. On at least 3 occasions I have stepped on a rock and wrenched my ankle in these shoes. One incident occurred in the middle of the woods about five miles from my car, and I was worried I had done some serious damage (shooting pain all the way up the lateral side of my leg). On the plus side, the trail was behind the local hospital, and that was a closer walk. Fortunately I was able to shake it off…

I attribute my ankle issues in this shoe to the lever created by the firm, inflexible sole coming into contact off-center with something sticking out of the ground. It may just be that I’m so used to running in more minimal shoes, but I do think this is one potential drawback of a beefier trail shoe.

If you’re looking for a low drop, protective trail shoe and don’t mind a snug toebox and fairly inflexible sole, the Saucony Peregrine 3 is a solid choice. By going a half size up it accommodates my foot well enough to be comfortable, and it allows me to run trails without worrying too much what is under my feet. Conversely, if you like a lot of ground feel and have a tendency to roll your ankle a lot on trails, this shoe may not be the best choice for you.

To be honest, despite my personal reservations about the Peregrines, there is a pretty good chance I would have chosen them for the Vermont 50K had I run the race. I’ve experienced the limitations of a minimally protective shoe over a long distance (one mis-step is all it takes), and these seemed like a safer bet than some of the other trail shoes I’ve been running in lately (the Merrell Mix Master 2 was my other frontrunner). I also have a history of success with Saucony shoes in long races. Next year maybe I’ll train enough to actually run it!

The Saucony Peregrine 3 is available for purchase at Runningshoes.com.