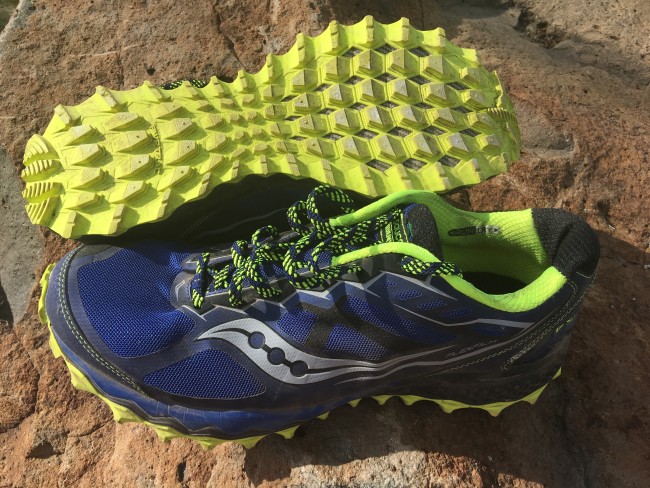 While I wouldn’t say I have a long history with the Peregrine line (I’ve never really taken to the shoes), I have run in versions 1, 2, 5 and 6, so I have some sense of the evolution of the shoe. Overall, I feel that it has improved over time.  Saucony overhauled the Peregrine for 2016 with a heel Everun insert and new PWRTRAC outsole.

Read on below for my take on the effectiveness of the changes. 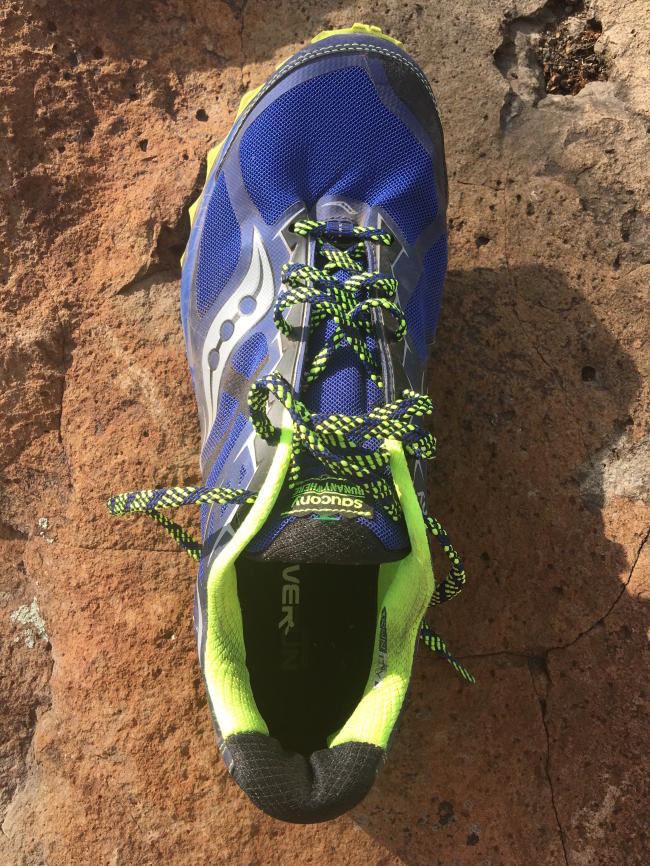 Ok overall fit, but toebox still a little pointy, and just not very comfy up front.

The fit of the Peregrines (and other Saucony shoes) has always been the limiting factor for me.  The Peregrine 5 was by far the best fitting Peregrine for me, and other than a overly stiff heel counter, I had no problems with that upper.  The Peregrine 6 doesn’t quite have as nice of a toebox feel to me (a little less compliant/soft feeling), and the heel counter is still too stiff/overkill for this type of shoe.  The biggest issue with the Peregrine 6 is the vertical stitching on the very narrow heel cup/collar – it hit my heel bone in such a way that it has caused blisters on every outing I’ve taken the shoe on (and I probably only get a handful of blisters all year).  Not good.  Other than that, the upper is pretty standard mesh with Saucony’s Flex Film overlays, and works decent enough in the midfoot and even in the forefoot, though there is still some room to improve the shape there, which is still too pointed. 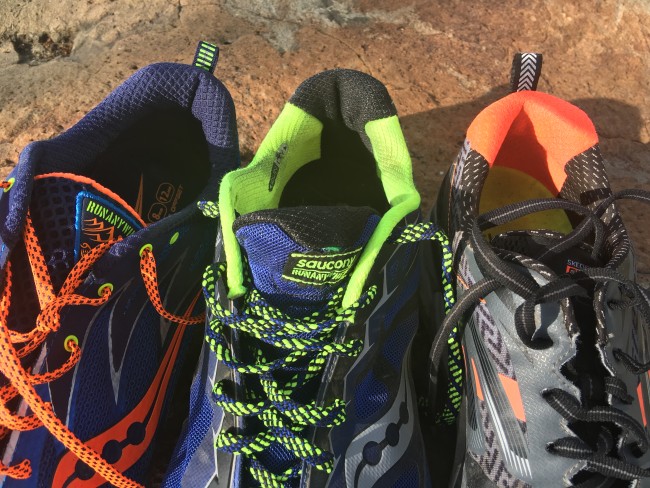 Peregrine 5, Peregrine 6 and Skechers GOtrail Ultra 3 from left to right. P5 has no material change/stitching on heel and Ultra 3 has it wide enough to not be a problem. Peregrine 6 is too narrow and hits my heel bone.

One of the big stories for Saucony (at least from a marketing perspective) is the recent use of Everun material, which like the Boost material that is used in adidas shoes, is a TPU based cushioning material that touts better responsiveness and durability.  The big difference with Saucony is that they only (so far) have implemented it in a “topsole” fashion, which means that there is a thin layer of Everun on top of the traditional EVA midsole.  In the Peregrine 6, this layer is only in the heel.  Personally, I could not tell much difference from its inclusion in version 6 to the ride in version 5.  The heel may be just a bit softer on downhills, but I’m not entirely convinced this isn’t just from the softer PWRTRAC outsole.  I’m a little confused, particularly since the Peregrine is a pretty light and low trail shoe that favors a midfoot/forefoot landing, as to why they didn’t put the Everun in the forefoot instead, where it would be more noticeable and help offset some of the firmness from the substantial rockplate (which I like). 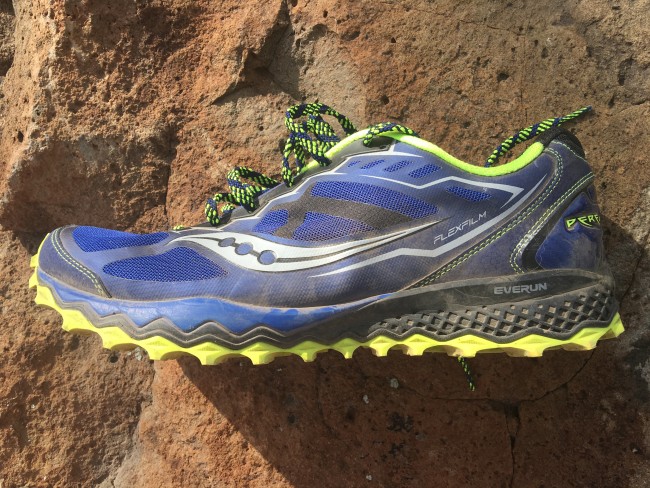 Pretty basic midsole design with 4mm offset. Somewhat firm-ish, but outsole softens that up a bit.

One thing I thought on my last run in them was that the midfoot was much too flexible, and doesn’t tie the shoe together very well since it has a more substantial forefoot and heel structure.  The solution to this would be to put a small shank in the midfoot to help tie the front and back together. 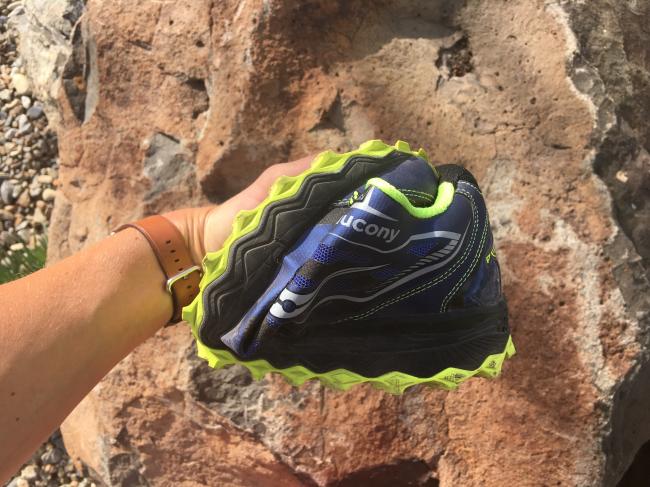 No midfoot structure with a somewhat structured forefoot (rockplate) and heel (stiff heel counter). Just to be clear, the foot doesn’t bend this way, so the shoe doesn’t need to either ;).

Overall the ride is not bad, but its not memorable either.  It gets the job done, protects the foot well and feels moderately precise, but doesn’t grab me in any way and is the main area (other than removing heel collar stitching) to improve the shoe going forward. 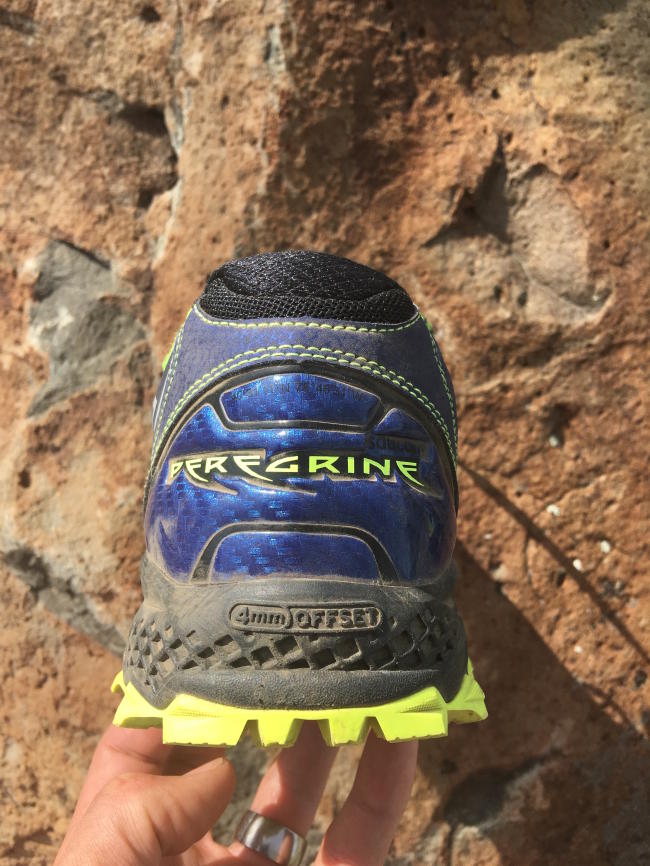 The new PWRTRAC outsole is by far the most improved area of the shoe over version 5.  I’d go so far as to say, if Saucony would put the new PWRTRAC outsole on the Peregrine 5 midsole and upper they’d have a really nice shoe.  The rubber compound is nice and sticky while also contributing cushion and responsiveness to the ride.  I’d argue that the lug shapes are too pointed for the type of shoe it is, which will accelerate wear, but overall it is so much better than the old (but extremely durable) hard rubber that the previous Peregrines had that was super sketchy on anything but dry dirt (wet rock or bridges were dangerous in that shoe). 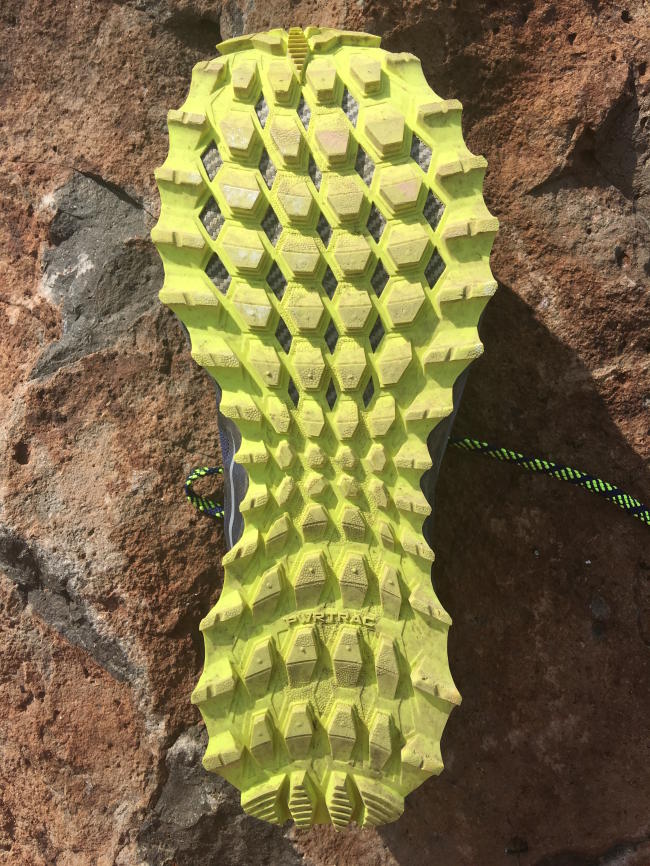 Great rubber compound and aggressive lugs. I’d probably prefer the edge lugs to be like the ones in the middle and have some surface area rather than being narrow ridges which would have them hold up better/longer.

Overall, my experience with the PWRTRAC rubber, which is also on the Fastwitch racing flat and Nomad TR has been very positive and is one of the best developments in Saucony’s trail shoes thus far.  The forthcoming Xodus ISO looks to use the PWRTRAC rubber as well.  Overall, the traction on the Peregrine 6 is vastly improved over all other versions. 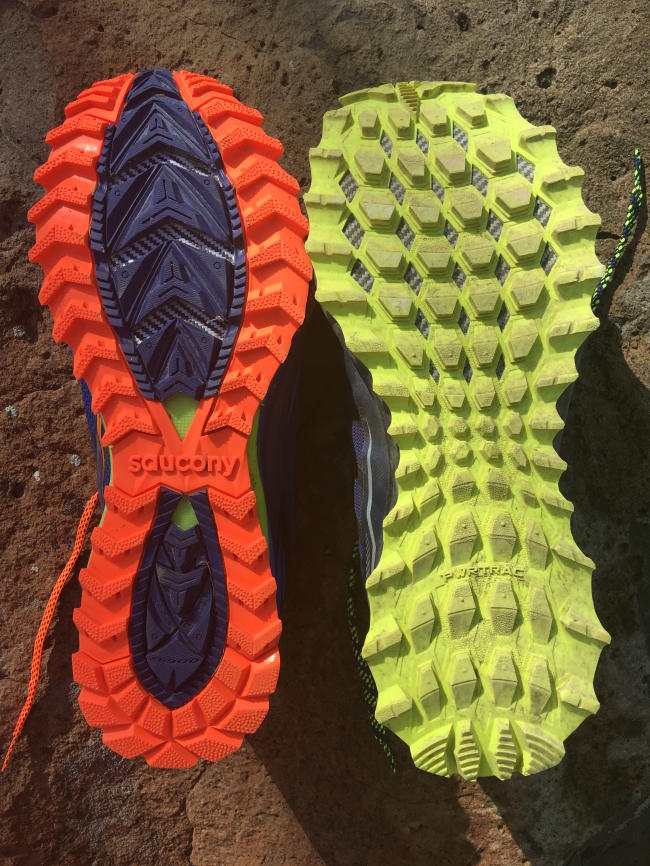 Peregrine 5 profile is narrower than 6 (better I think) and has midfoot structure with TPU (green material) in midfoot…much better overall in my view. The rockplates are similar and both very robust for a light trail shoe.

Some good, some bad with the Peregrine 6.  The outsole is a great improvement, and the ride is maybe a bit softer and flexible as a result of the outsole as well.  However, the upper really detracts from the shoe and is a rare, deal-breaker upper for me. This is unfortunate as upper issues are less common these days – most shoe companies are producing much more comfortable uppers than even a short 3-4 years ago.  The stitching on the inside of the heel cup is a must fix for a Peregrine 7 in my mind (I’d love to see them fix it in the new Peregrine 6 colorways for Fall 16 if possible…it needs immediate attention).  If they fixed that and added a midfoot shank (both could be done without a new midsole mold) they could salvage an otherwise decent shoe.

The Saucony Peregrin 6 is available for purchase at Running Warehouse.