Home / Blog Posts / Saucony to Abandon the 12mm Lift Model: Big Move From one of the Big P

Saucony to Abandon the 12mm Lift Model: Big Move From one of the Big Players in the Running Shoe World 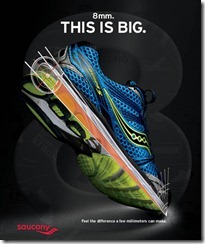 Last Wednesday I was invited along with several other bloggers to participate in a conference call with representatives from Saucony. The group we spoke with included:

I’d spoken to Sean before, and have interacted with him a number of times via email, but this was the first time I’ve actually had contact with the footwear design team from the company. The purpose of the call was for Saucony to have a chance to explain a bit about their plans to reduce 3 of their flagship shoes from a 12mm heel-forefoot drop down to 8mm (the Triumph 9, Guide 5, and Hurricane 14).

I was impressed by how open the folks from Saucony were, and they answered every question we threw at them. I asked if they could give me a bit of history regarding the origin of the 12mm heel-forefoot differential, and if they knew when and why that number was settled upon as standard by the industry. The response was that they had indeed looked into that, but could not find an answer. They indicated that back in the 80’s some of their shoes had even a higher lift, but that it seems that much of the reasoning behind the design standard was simply because that is how it has been done for as long as any of them could remember – in other words, a historical norm with no real scientific basis (and they agreed on the lack of good science supporting it).

Of particular interest relating to the topic of heel lifts in running shoes is the fact that the Saucony folks revealed to us that they intend to abandon the 12mm lift model entirely. If all goes according to the plan they described, all of their traditional 12mm lift shoes will be migrated down to 8mm (not just the three mentioned above). They indicated that the science and their in-house testing supports the move, and feedback from their testers has indicated that people overwhelmingly have preferred a lower drop shoe. They also informed us that the Kinvara is now their number two best selling shoe after the Saucony Ride – they have a ton of consumer data since the Kinvara came out before most other companies started putting out lower drop shoes, and thus their experience tells them that this is the right choice at the right time.

We covered much additional ground in our conversation, but to me this was the biggest news. If they follow through, Saucony will be the first of the big running shoe manufacturers to fully abandon what has until recently been almost an industry standard midsole differential in favor of something less. I give them a lot of credit for having the guts to make changes to their traditional line. It’s a bold move in the current market, and it will be interesting to see how it is received.

What do you think? Wise choice, or big risk?

You just finished reading Saucony to Abandon the 12mm Lift Model: Big Move From one of the Big Players in the Running Shoe World! Consider leaving a comment!