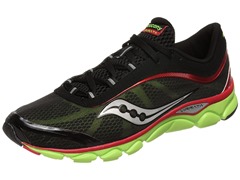 Several weeks ago I travelled a bit over an hour south from my home in New Hampshire to visit Saucony headquarters in Lexington, Massachusetts. The purpose of my visit was twofold. First, I wanted to visit their biomechanics lab and have my form analyzed using their gait analysis setup (force plate treadmill, 3d kinematics – very cool!). Second, I wanted to meet their design team and get a tour of their facilities.

I arrived at Saucony HQ just before the official release of their new zero drop shoe, the Saucony Virrata. Given my past success with Saucony shoes (Kinvara, A5, etc.), I was really excited about the Virrata and was looking forward to getting ahold of a pair. When I arrived I was told that I’d be able to run in their gait lab in the Virrata, and take a pair home with me – for a guy with my interests, this is like a kid walking into a candy store and being given the biggest lolliop in sight!

I have a lot more to say about my experience that day (lots of data and videos from the lab), but what I’m going to focus on here is a review of the Virrata. I’ve now put over 50 miles on them, and they’ve quickly become one of my favorite shoes.

The Virrata is not Saucony’s first foray into the zero drop niche. They released the Hattori a few years back, but it never really caught on in a big way, and based on my conversations with the Saucony team its future in their lineup is in limbo (personally, I like the Hattori, but some aspects of its design prevent me from running in it beyond a few miles). With the Virrata, Saucony was hoping to create what essentially amounts to a zero drop shoe built in the mold of the popular Kinvara. In other words, they weren’t trying to make a “barefoot-style” shoe here. Rather, the intent was for the Virrata to serve as a well cushioned shoe for those who don’t like any heel lift.

Before getting into the nitty-gritty details of how the shoe performs, I wanted to address a bit of a controversy about the Virrata. When Runner’s World reviewed the shoe they reported it to be a 4mm drop shoe (24.6mm heel, 20.6mm forefoot to be exact). I’ve heard a few other people comment that it doesn’t feel zero drop. I asked Saucony about this and they were rather perplexed by how those Runner’s World measurements were obtained, and assured me that the shoe is in fact zero drop (I’m hoping to get a photo of a sliced shoe from them as proof Saucony provided me with a photo of a longitudinal sole section showing that the sole is level from the heel to the region of the metatarsal heads). Running Warehouse reports the Virrata as being 17mm heel, 17mm forefoot. I used my trusty C-calipers and also measured it as 17mm heel, 17mm forefoot (insole included). Given this, I’m confident that the shoe is in fact zero drop, and I’m also now a bit confused about the measurements reported by Runner’s World (Update: In talking with Runner’s World the discrepancy seems to be due to differences in the locations where sole thickness measurements are taken).

As I mentioned above, I’ve now put a bit over 50 miles on the Virrata. I’ve used it for easy runs and speed, and have run as long as 13 miles in one go in them. It has performed well in all situations. Below are my more detailed thoughts:

The upper of the Virrata is very reminiscent of that on the Kinvara v2. It’s composed of an outer layer of monofilament-style mesh, and an innner layer of soft fabric. When I first saw the shoe I was a little worried that the outer mesh might be prone to tearing as has been reported in the Kinvara v2, but Saucony told me that it’s not the same material and that it should hold up better. I have not had any issues with the upper on my pair yet.

In terms of fit, the Virrata initially felt snugger in the forefoot to me compared to the Kinvara. After wearing the first pair I was given around for a few days, I came to the conclusion that the shoe fit just a tad short, and that going up a half size might make for a better fit. I gave my size 10’s away and asked Saucony if they could replace them with a pair of 10.5s. It made all the difference in the world! I now feel like the fit is pretty similar to the Kinvara in a half size smaller, and I don’t feel like the Virrata is overly constrictive. I haven’t tried running sockless in the Virrata yet, but the interior feels like it might be suitable for sockless running.

Sizing up in the Virrata had an unexpected consequence with regard to the feel of the sole underfoot. When I first put my original pair on I felt like the sole of the forefoot thinned out rather abruptly up front, almost making me feel like I wanted to roll forward in the shoes. Part of me wonders if this is why some people say it doesn’t feel zero drop. However, after sizing up that feeling is gone. I think the issue has to do with the podded design of the sole cushioning.

If you look at the photo above, you’ll notice the distinct bands of triangular cushioning pods that cross the sole. The band directly across the center of the forefoot is the same thickness as the heel (17mm), and should sit right under your metatarsal heads. I think in the size 10 my met heads were a bit more toward the front of this band, which accentuated the feeling of the sole thinning out up front (and maybe why some say it doesn’t feel zero drop). When I went up to the size 10.5, I could feel that the pod row was now in a better place, and the forefoot cushioning felt much better. In fact, with the fit correct I might go so far as to say that the Virrata has the best forefoot cushioning of any shoe I have worn.

The sole of the Virrata is pretty soft, so those who like a firm shoe should look elsewhere. But, if you like the Kinvara and you want a zero drop alternative, or if you’re just looking for a well-cushioned zero drop shoe, the Virrata is definitely worth a look.

Another benefit of the podded sole design is that the forefoot of the Virrata is quite flexible – I’d say it’s a bit more flexible than the Kinvara. A drawback of the pods is that I suspect durability will be a problem for some runners, particularly those who chew up the lateral forefoot of the Kinvara. Because the pods extend down from the sole, I suspect they might wear down faster than a more uniformly flat sole design.

Saucony chose to use rubber very sparingly on the sole of the Virrata (likely to spare weight – the Virrata is listed at only 6.7oz in a size 9) – there is a patch on the heel, and a bit under the big toe and tip of the forefoot. The rest of the sole is exposed EVA, so again a cause for concern if you have a history of accelerated sole wear on your shoes. I will say that after 50-60 miles my sole wear is pretty minimal, but I tend to not destroy soles badly.

I’ve really enjoyed running in the Saucony Virrata over the past few months. As a fan of the Kinvara, this shoe feels like a close, zero drop cousin with better cushioning under the forefoot. All good things. Perhaps the most complimentary thing I can say is that the Virrata remains in contention to be my Spring marathon shoe – it’s probably a close second to the Skechers GoRun 2 for that honor with two months to go.

At an MSRP of $89.99, the Virrata is actually a pretty reasonably priced shoe, though cost per miles run (i.e., durability) will vary highly depending on how your mechanics work with the sole of this shoe. Given the current condition of my shoes, I’d say that they should be comparable to the Kinvara in terms of durability.

Outside of the US, the Saucony Virrata can be purchased at Wiggle.

In the US, you can purchase the Saucony Virrata in several color combinations (see below)at Running Warehouse.