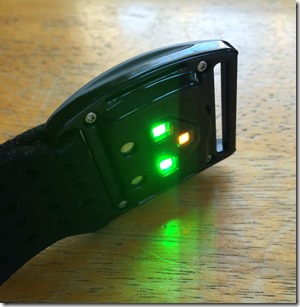 Last summer I reviewed the Mio Link wrist-mounted heart rate monitor and found it to be a great alternative to a traditional chest strap HRM. It measured my heart rate accurately, and synced perfectly with both my Garmin 620 and Vivofit. I had to return the Link to the manufacturer after writing my review, but was very tempted to buy one for myself. Instead, based on the recs of some running friends, I purchased a Scosche Rhythm+ HRM instead. I’m actually quite glad I did as my overall experience with the Rhythm+ over the past several months has been fantastic.

The Mio Link and Scosche Rhythm+ share a lot of similarities. Both offer an alternative to the traditional chest strap heart rate monitor, both measure heart rate via sensors and LED lights that measure blood flow through the skin, both lack a screen, and both pair with other devices via Bluetooth Smart or ANT+. Pricing is also similar, with both devices selling for between $70-$80.

For me, the main thing that sets the Rhythm+ apart from the Link is the band used to attach it to your arm. The Mio Link is a wrist-based device – it has a watch-like plastic band that I found somewhat uncomfortable, particularly when cinched tightly. There is really no alternative with the Link other than attaching it to your wrist, and this has caused problems for some people as HR measurement requires a good, tight fit (those with bony wrists have reported dropouts and other problems).

In contrast, the Scosche Rhythm+ comes with two neoprene-like bands that allow for placement in a variety of places on the arm. On the product packaging Scosche shows the band on the forearm, but it can also be placed around the upper arm or on the wrist. I’ve actually worn mine on my wrist most of the time, right next to my Garmin Vivofit. The band is much more comfortable than that of the Link – since it secures via Velcro it’s easy to cinch up for a snug fit, and it’s nice not having a plastic band digging into your arm. 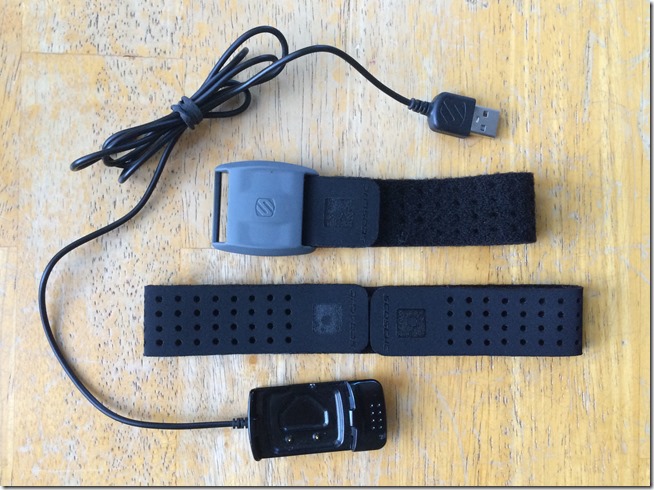 The Rhythm+ is pretty simple to operate. It charges via a USB dock (see photo above). When you’re ready to use it you simply press the Scosche logo on the device and it activates (an alternating blue/red light on top starts to blink). On my Vivofit (see photo below) I simply press the button until it says “Heart” and the device picks up automatically (the blinking light changes to red only while synced). On my Forerunner 620 I activate the heart rate monitor in the watch settings (Settings—>Sensors) and then it syncs with the device. It should automatically recognize it every time you turn it on after the initial sync. 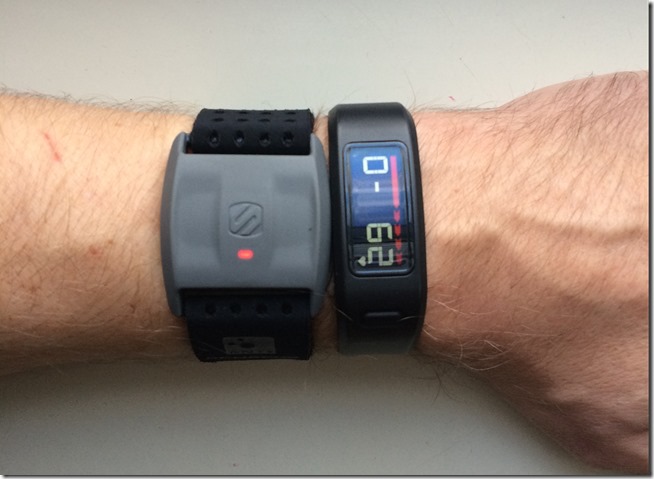 I’ve been using the Rhythm+ for running with my Garmin 620 (on the opposite wrist), and though I have experienced occasional dropouts (see downward spikes in images below), they are rare and could be since I use a wrist placement rather than the recommended placement higher up on the forearm (could also be due to the devices being on opposite wrists). To be honest, one brief dropout over five miles isn’t a big deal, and I didn’t even notice that it happened until I looked at the plots in Garmin Connect later on. I’ve never actually noticed a signal dropout while running.

One thing to note is that the Scosche Rhythm+ will not transmit accurate heart rate variability data (not sensitive enough I guess – I’ve tried it with the SweetBeat app and the numbers are not correct). As a result, it does not provide accurate information to calculate things like recovery time on my Garmin 620. Not a big deal for me, but worth mentioning.

I’ve also been doing a bit of cycling on a recumbent bike this winter when the weather is bad enough to keep me inside, and on these occasions I use the Rhythm+ paired with my Vivofit. This combo also works great, though dropouts seem more common with the Vivofit than with my Forerunner 620. Again, a few momentary dropouts over the course of 45 minutes of cycling are really not a big deal to me since I mainly use it to gauge my effort in real time and have never actually noticed a dropout until looking at plots afterward.

If you’re looking to ditch your chest strap heart rate monitor and already have a device that syncs with ANT+ or Bluetooth Smart sensors, the Scosche Rhythm+ would be my recommendation over the Mio Link. Both are great little devices, but the flexibility offered by the strap options for the Rhythm+ make it a better choice in my experience. It can be worn on the wrist like the Mio, but also on the forearm or around the bicep (unless you are Arnold). I’ve been very impressed with mine – no plans to return to a chest strap ever again if I don’t have to.

The Scosche Rhythm+ is available for purchase at Amazon.com and Clever Training (Runblogger readers get 10% off select products at Clever Training with code RunBlogXJT). Purchases made via these links provide a small commission to Runblogger and help to support the production of reviews like this one – thanks!