I spent this past weekend at the National Conservation Training Center in Shepherdstown, WV, a small town tucked along the Potomac River near the border with Maryland. Though I have spent time in West Virginia in the past, I’d never been to Shepherdstown, and thus knew very little about it. My reason for traveling to this little, out-of-the-way village was that my friend Mark Cucuzzella had invited me to attend a three day course on the prevention and treatment of running injuries. West Virginia, one of the most obese states in the USA, seems like an unlikely location for such a course, but I write this with the belief that Shepherdstown might just be an epicenter of the natural running movement. I’m not joking.

Why do I say this? Well, last Friday evening Mark organized a public panel discussion on natural running at a local hotel called the Bavarian Inn. The panelists were many and varied, and I was thankful for the opportunity to participate, but I was a bit curious about how many people might show up to such an event in rural West Virginia. Were the panelists going to outnumber the audience??? Hardly.

I actually arrived at the Inn a bit late and entered the conference room just as the event was getting under way (we had gone for a group run, so a valid excuse!). To my surprise, the event was packed (see photo below of a portion of the crowd). Standing room only. A crowd of 150+ people had come, and another 50 or so had to be turned away due to the lack of space in the facility. I couldn’t believe it – here we were in a state renowned for it’s inactivity, and I had to weave my way through a crowd of people who were squeezing into a room like sardines in order to take my place on the panel. 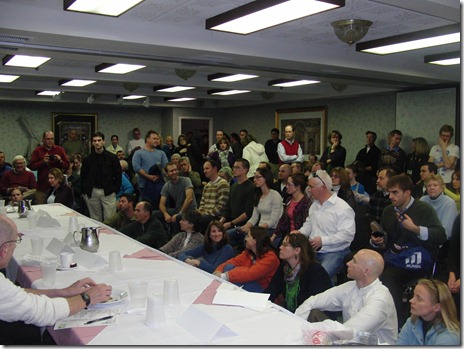 As I stood in the front of the room waiting for my turn to speak, I did what any shoe geek does – I looked at what people had on their feet. Never have I been in a place where so many people were wearing minimalist and barefoot style shoes. When I had my chance to talk I spoke about kid’s shoes for a bit – encouraging the production of better shoe options for kids is one of my personal missions. And the amazing thing was that the crowd responded in knowing agreement – heads were nodding, the audience understood.

Why is this? Why is it that I can get into debates with sensible people about why kids shouldn’t be wearing mini motion control shoes, but here in rural WV people get it? Why did a large crowd navigate snowy roads on a Friday night to hear a panel talk about the benefits of natural running? Why did people (Dr. Craig Richards) fly in from as far away as Australia to speak on the panel?
The answer is really quite simple – Dr. Mark Cucuzzella. What Mark has accomplished in Shepherdstown is nothing short of remarkable. He has turned a small town in an obese state into a running-crazed bastion of health. He has opened a minimalist shoe store, TR Treads, in the heart of the town. He has given away free healthy shoes for kids, he has organized races, and he has encouraged the population to get active. Mark’s effort in transforming Shepherdstown is a testament to what a single person can accomplish given the combination of a tireless work ethic and strong convictions. He believes in the value of exercise, he believes in the value of healthy shoes, and he is the reason why I and others were there on that panel last Friday night.

In the coming days I will be writing a lot about what I learned and experienced in Shepherdstown, and to be quite honest the experience was nothing short of amazing. But first I wanted to thank Mark for what he has done for his community and what he has done to bring like-minded people with big ideas together. Shepherdstownis lucky to have a guy like Mark inspiring a lifestyle of health and wellness, and the community of runners is lucky to have him as an ambassador. Thanks Mark!