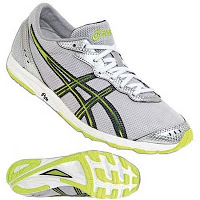 I’m fortunate that given my inability to personally run in and review every shoe on the market, I have friends out there who are more than willing to help me get the word out regarding shoes that might represent good options for those wanting to migrate into less shoe. “Airforce” Ted Beveridge is a fellow minimalist (and sometimes barefoot) runner who I have come to know over the past few months, primarily through our interactions on Twitter and dailymile. Ted is the voice behind the “You Don’t Have to Run Alone” podcast, which I recommend giving a listen if you get a chance. Turns out that Ted and I share common interests in both running shoes and far more significant topics like the battle against childhood obesity. After reading my review of the Brooks Mach 11 XC racing flat, Ted bought a pair, and found it to be a near-perfect shoe for his foot. His other favorite shoe is the Asics Piranha, so I asked if he’d be willing to write up a review for me to share on the blog. Here’s what Ted has to say on the Piranha: 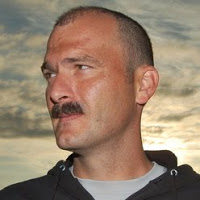 Before I can effectively review these shoes, I should explain why I made the decision to train daily in racing flats. The journey first began after reading the book “Born to Run” by Christopher McDougall. Reading McDougall’s book caused me to question the common belief held in the running community (as recommended by the shoe manufacturers and retailers) that we should replace our shoes after 300-400 miles. To answer the question I took a pair of Asics gel Nimbus 11’s through marathon training and about 1,400 miles. Running my first marathon in them proved that the shoe industry was right in that the shoe does break down over time, but what it proved to me was that my feet were capable of adapting to the lack of cushioning, and that I no longer needed as much support as I once thought.

One of the things that I discovered in this process was that both my stride and my turnover rate had changed significantly over time. I wanted to introduce a shoe that would allow me to experiment more with minimal cushioning . After some research (cost playing a factor), I found the Asics Piranha SP2’s to be a reasonable option. I’m very brand loyal and felt that if the Nimbus 11’s were so durable then I should see the same results in the Piranha’s. 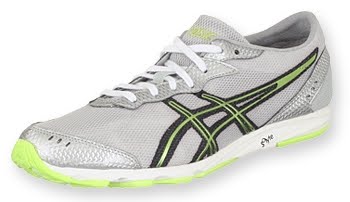 Enter into my running life the Piranhas. When they first arrived I had to shake the shipping box to see if anything was really inside. After pulling them out for the first time I had to really examine the shoe to see what made them so light. At 4.2 ounces it really is quite the head scratcher how one could make a shoe feel like air (Runblogger’s Note: I have to agree with Ted on this one – saw the Piranhas at the Bill Rodgers Running Center in Boston and they are ridiculously light).

While examining these shoes I found that there was almost zero perceptible heel to toe drop (specs on Running Warehouse indicate a 14mm heel and 10mm forefoot). They are very low profile with a minimal amount of cushioning in all areas. The toe box is surprisingly wide and accommodates my foot very well – my foot is not constrained at all. I use Yankz laces on all of my regular shoes in rotation, and I’ve found that they keep the uppers comfortably in place without unnecessary pressure. The only issue I had with the construction of the shoe was the durability of the outsole.

My first run in these shoes proved to be quite an eye opener. I include some barefoot miles as a regular part of my training in order to strengthen my feet. I’m not planning on being a 100 percent barefooter in the near future, however, having the experience of doing it proved insightful while running in the Piranhas. Since there is zero noticeable heel cushioning I found myself landing on the midfoot with a high turnover rate. In my opinion the Piranha falls in the range of what some term “minimalist” shoes. My personal definition of minimalist is any shoe that allows me to naturally run as if I were running barefoot. Too much heel cushioning allows me to be lazy and land on my heels. That, in turn, has in the past lead me to injury. In 2009 I was injured 4 different times with problems ranging from ITBS, Achilles tendonitis, PTT, etcetera. Why this data is relevant is that so far in 2010 I’ve been injury free, and my transition to midfoot running in shoes like the Piranha is the only variable in my personal running equation that has changed.

The Piranha SP2’s force me to run midfoot and my wear pattern after 150 miles in them supports that. I’m estimating that they’re at 50% outsole life, so it looks like I’ll get 300 total miles out of them. They are by far my favorite shoe in my running line up. I’ve run upwards of 13 miles at a time in them but I could certainly see them going comfortably farther.

In conclusion I’d like to note that the flexibility, road feel, and overall comfort of these shoes are top notch. I wish every mile I run could be in these shoes, but as I run 50-65 miles per week they would wear out quite quickly. I would recommend these shoes to anyone out there who wants to run in a shoe that is very fast and lightweight, and that doesn’t get in the way of a midfoot stride.

Runblogger’s Note: Asics has released the Piranha SP3, which is an updated version of the shoe that Ted reviewed here. You can check out the Asics Piranha SP3 at Running Warehouse.