Home / Blog Posts / Should You Emulate the Running Form of Elites: Book Excerpt from Tread

Should You Emulate the Running Form of Elites: Book Excerpt from Tread Lightly 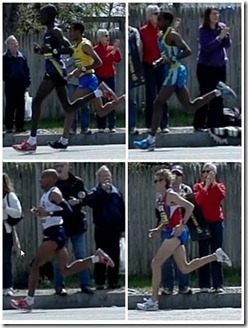 I was originally planning to publish a few excerpts from my book, Tread Lightly: Form, Footwear, and the Quest for Injury-Free Running, prior to its June 1 release date. Well, the publisher moved faster than I expected, and the book is now in-stock at Amazon.com and should be on store shelves very soon (and yes, a Kindle edition is also in the works from what I have been told).

Despite this, I’ve decided to move on with publishing a few excerpts, and below is the first. The text is a sidebar from a chapter on the running stride titled “Should You Attempt to Run Like the Elites?” It discusses why caution is warranted when examining the running form of an elite runner and trying to apply it to yourself. Enjoy!

One approach to learning about good running form is to watch the elites – they run for a living and have spent more time fine-tuning their form than the vast majority of recreational runners. However, a few things should be kept in mind when trying to emulate the form of elite runners.

First, and most obviously, elite runners in a race are running very fast, and form changes with speed. It makes little sense for a recreational runner who puts in most of their miles at an 8:00 or 9:00 per mile pace to attempt to perfectly mimic the gait of an elite 10,000-meter specialist running at a sub-5:00 per mile pace. Most of us would be better off emulating the relaxed form they employ during their victory lap!

Second, form among elite runners is variable. Alberto Salazar, who won the Boston Marathon once and New York City Marathon three times in the early 1980’s, was widely believed to have succeeded despite his form rather than because of it. So even elites may not be perfect role models. Should the average runner mimic the head-bob of Paula Radcliffe? Probably not, even though she does happen to own the women’s marathon world record. Emil Zatopek was one of the greatest distance runners of all time. But here’s how New York Herald Tribune sports columnist Red Smith described his form: “He ran like a man with a noose around his neck…the most frightful horror spectacle since Frankenstein…on the verge of strangulation; his hatchet face was crimson; his tongue lolled out.” Another newspaper scribe wrote, “He ran as if his next step would be his last.” But Zatopek, a three-time gold medalist in the 1952 Helsinki Olympics, had a ready-made answer for his critics: “I shall learn to have a better style once they start judging races according to their beauty. So long as it’s a question of speed then my attention will be directed to seeing how fast I can cover the ground.”

There are many factors that make elites capable of throwing down times that the rest of us could only dream of – these include inherent aspects of their anatomy and physiology, training background, motivation, mental toughness, VO2 max, capacity to endure pain, and so on. Form is just one part of the picture when it comes to elite running success, and it may be a very small part.

Taking this a step further, even if we take a group of elites who experts might classify as having “ideal” form, careful examination will reveal variation among them. Some carry their arms high, some carry them low. Some keep their torso upright, some lean forward a bit. Some spend a bit more time with both feet airborne, some stay closer to the ground. Some heel strike, some land on the midfoot, and others land on the forefoot. There are commonalities among elites that may suggest general patterns, but looking at any single elite’s running form as a model of absolute perfection that should be copied is a mistake. Running biomechanist Peter Cavanagh made this very point back in 1980 in the book The Sweet Spot in Time by John Jerome: “It doesn’t work, for instance, to tell the novice to imitate (Bill) Rodgers…running style, or performance in any sport, eventually boils down to the way you adapt to your own anatomy, your own physiology, to the peculiarities of your own body.”

The take-away message for all runners is that each of us is unique—and this applies to the recreational runner as well as the elite. Ultimately, the key is finding the best form for your individual body – whether that’s the form that lets you run fastest, most efficiently, or with least chance of injury, that decision is up to you.

You just finished reading Should You Emulate the Running Form of Elites: Book Excerpt from Tread Lightly! Consider leaving a comment!