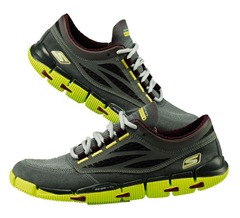 Since initially being contacted by the design team behind the Skechers Go Run, a local ultrarunning friend (Nate Sanel) and I have been working with them regularly on several shoes that they currently have in development (note: I receive no payment from them aside from the prototype shoes I have been testing, which are provided free of charge – I simply enjoy the process of being able to help make a better shoe). It basically works like this: they send us each a pair of shoes, Nate and I run in them a bit (his mileage being significantly higher then mine), and then we share our thoughts with the design team. We then receive a second iteration of the shoe incorporating some of our feedback as well as that of individuals in their wear test program. This goes on until the designers are prepared to put the shoe into production.

So far Nate and I have been testing out three separate shoes, and two of them are now going into final production. Of these, the one that I have spent the most time with is a shoe called the Skechers Go Bionic. I’ve been running in these on and off for several months now over a few iterations, and I have to say that I am rather impressed by the final product! 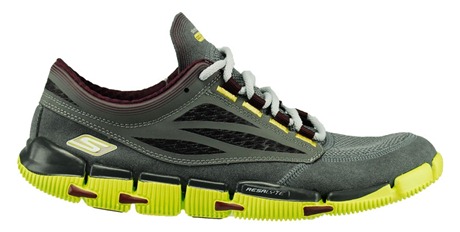 What Skechers has done with the Go Bionic is take the concept behind a shoe like the Nike Free 3.0 and make a shoe that has a zero drop sole (11.5 mm thickness), slightly greater flexibility, and a significantly roomier toebox. As such, if you like the feel of the Nike Free but find them to be narrow and a bit too high in the heel for your taste, the Go Bionic is the shoe for you.

A few months ago I wrote an extensive review of the Skechers GoRun shoe. In that review I mentioned that though I loved the upper of the shoe (possibly the best of any shoe I have worn), the rockered sole with a distinct ‘bump” under the midfoot felt a bit awkward when standing in the shoes. The Go Bionic does away with the rocker as well as the midfoot bump. Although the shoe in the image above appears to have a slightly rockered bottom, that appearance is due to mainly to the fact that it has an undercut heel much like that on the Go Run, Brooks Pure, or New Balance Minimus Road. When you stand in this shoe, it feels completely flat. 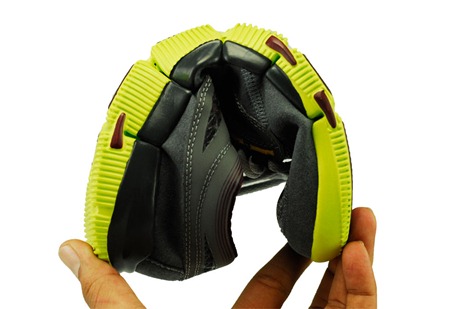 Where the Go Bionic stands out among the current crop of zero drop shoe offerings is in it’s combination of flexibility and cushioning. This is one of the most flexible shoes that I own, and the outsole grade Resalyte foam in the sole feels very much like the foam in the sole of the Nike Free – this is not a firm shoe, but it is also not squishy. It shares a property found in the Free of making very little noise when it hits the ground. I always enjoyed the silence of running in the Free 3.0, and I get a similar feeling when running in the Go Bionic. The large gaps in the sole make it flexible longitudinally (front to back), transversely (side to side), and torsionally (i.e., you can easily twist the forefoot relative to the rearfoot). I particularly like the torsional flexibility as it decouples rotation of the heel portion of the shoe from the wide forefoot in a forefoot strike. This makes for a very smooth feeling as you run, not the jarring transition that can occur in a forefoot strike in a shoe with a stiffer sole. 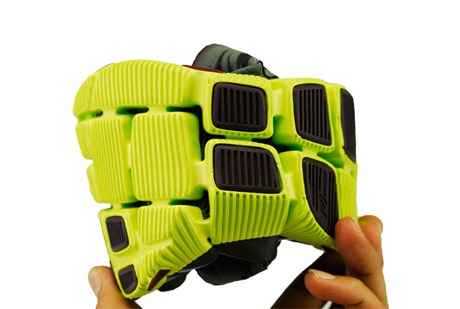 The fit and feel of the Go Bionic is fantastic. I’ve run almost all of my miles in this shoe without socks, and short of one small blister on the inner side of the ball behind my big toe, I have not had any abrasion issues – they are actually moving the seam that caused my blister as a result of my feedback, so hopefully this will be taken care of in the production version. As mentioned, the toebox is quite spacious, and I have found them to be quite comfortable on the occasions that I have worn them all day at work. 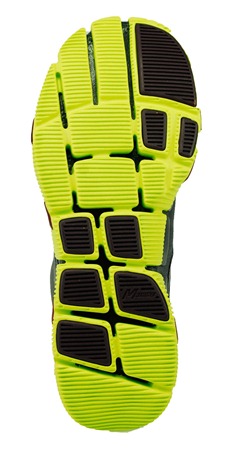 One initial concern that Nate and I had is that because the grooves in the sole extend all the way through the sole to the footbed (hence the tremendous flexibility), you can feel the sole gaps with your foot when you stand or walk in the shoes. We found that once running in them (with a forefoot or midfoot strike) this was not an issue. However, we suggested that they include an optional, thin, flat insole that can be inserted over a finished footbed – they agreed and the shoe can now be used with or without the insole with comfort. The insole does prevent me from feeling the gaps in the sole, so I use it if I’m wearing the shoe out and about, but I generally take it out before I run. Without the insole, the Go Bionic weighs in at right around 6.0 oz.

One concern that some people expressed when I posted a photo of the sole on Facebook is that there is no outsole rubber under the lateral forefoot. For some this might be a concern, but I have not noticed any abnormal wear in this area. But, then I don’t tend to wear down the lateral forefoot of the Saucony Kinvara either, so I think the tendency to wear in this area is highly individual. I did ask about this and was told that they had not observed accelerated wear on the lateral forefoot among their group of wear testers. That being said, if you know that you tend to destroy this area of shoes, this might not be the best choice for you. Since I have not put enough miles on a single pair to assess long term durability, I can’t comment on that. I do wonder how the exposed footbed will hold up with long-term use, but so far no problems, and there is apparently a layer of cement applied to the base of the footbed that should help with durability. 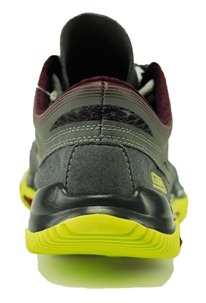 I’ve mainly used these shoes for relatively short runs (max seven miles – have not been in marathon training), as well as for a few speed workouts. I’ve had all positive experiences so far, and I think they would perform just fine on longer runs. That being said, Nate has done some long road runs in them (30+ miles) so you can check out his review for commentary on their long run performance.

All in all, Skechers has made some very positive strides with this shoe, and I suspect that those who had issues with the rockered sole of the Go Run will find this shoe to be a big improvement. Some people will find it hard to wear a shoe with the Skechers name on it, and it may take awhile for Skechers to overcome the baggage that comes along with its brand name, but I have had a very positive experience working with the design team for the “Go” line – they are very receptive to feedback and genuinely want to make a better shoe. To be honest, the team at Skechers has allowed a level of access to the design process that no other shoe company has provided to me, and I can’t say enough about how impressed I am with the group that is designing this shoe. I highly recommend the Go Bionic and plan to continue using it regularly myself.

The Skechers Go Bionic can be purchased in a variety of color combinations at Skechers.com and Shoebuy.com

For another take, check out my buddy Nate Sanel’s review of the Skechers Go Bionic.