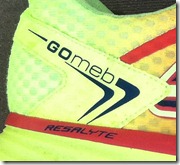 A few days ago Brian Metzler of Competitor.com published an article showing off the shoes that will be worn by some of the US Olympic Marathon runners in London. Among them was the shoe to be worn by Meb Keflezghi– the Skechers Go Race. Here’s what Metzler wrote about Meb’s shoe:

“When Skechers signed Keflezighi in the wake of Nike dropping him, the running world freaked out a bit. Skechers? Many people thought Keflezighi, then 36, was just taking a paycheck with a shoe brand desperate to get into the running market. Even if he was (and we’re not saying he did), Keflezighi and Skechers are the ones getting the last laugh, given that he’s lowered his personal best twice in the two marathons he’s run since signing with Skechers and running in the brand’s lightweight GORun model. Keflezighi won the U.S. Olympic Trials Marathon in January in a PB 2:09:08, which came about 10 weeks after a solid sixth-place showing in the New York City Marathon (where he’d set his previous best of 2:09:13). He’s 37 now, but few are counting him out anymore. Anyway, here’s a look at his custom Olympic model. A men’s size 9.0 weighs in at about 6.9 oz.”

As I’ve mentioned before, I’ve been in regular contact with the team at Skechers that developed this shoe, and have been wear testing prototypes of various shoes they are working on for quite awhile now. I was lucky enough last week to receive a wear test pair of Meb’s Go Race, and have run a 12 miler and a 7 miler in them. Feels great, kind of like a lower drop, better fitting (at least on my feet) version of the Adidas Adios 2, which will surely be a shoe on the feet of many of Meb’s competitors in London.

Can’t say any more than that right now since I’m on an NDA (I’m not receiving any payment from Skechers, but can’t talk about pre-production models in detail – standard practice for this type of thing), but it’s been a lot of fun to work with a team that has essentially been given free reign to design and experiment with shoes as they see fit.