Over the past few years I’ve had the opportunity to do pre-release product testing and development work with the performance footwear team at Skechers. It’s been an incredibly fun process, and getting to see suggestions that you make find their way into a shoe released on the market is quite a kick!

I’ve been given the go-ahead to talk about the newest release from Skechers, the GoBionic Trail. I had quite a bit of input on the GoBionic road shoe, and was excited when I heard they would be creating a trail version. When I received my first early production pair, it did not disappoint. Soft feel underfoot, wide toebox, luggy sole, and 4mm drop with the insole (zero drop without).

Given that I’m mostly a road runner, I largely kept to the sidelines on development feedback for the GoBionic Trail – runners like my friends Nate and Caleb are much more qualified to comment on a shoe designed for long miles on trails. However, based on the runs I have done in the shoe I’d rank it among the best of the trail shoes I personally have worn for the type of running I do (mostly mixes of light trail and road). 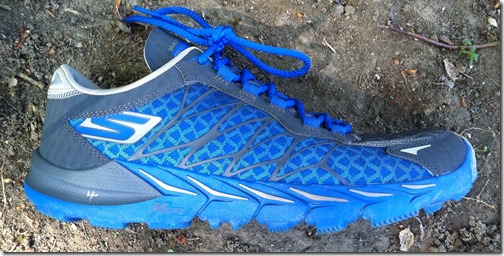 My coach Caleb Masland wore the GoBionic Trail to a victory at the HAT 50K back in March, and he just posted his review of the shoe along with some comments on his role in the design process. Here’s a snippet of what he had to say about using them in the race:

“I wore these shoes (actually, the final test round version) when I ran the HAT Run 50k this March. That race features a combination of single track, grass, pavement, gravel, and 4 deep stream crossings. I picked these shoes because they are versatile. They feel as good on hard roads as they do on trails, and they grip in the mud just as well as any other shoes. I was very pleased with their performance, and I credit a good shoe choice as one of the reasons that I was able to win the race.”

You can read Caleb’s full review of the Skechers GoBionic Trail here.

The shoes should be available on-line in a few weeks, and I hope to get some additional miles on them after my marathon in a few weeks. I will say that Caleb’s review matches my experience, but I hope to get Nate to review them either here or on his own blog for a slightly different perspective (i.e., suitability for a 100 mile race).

For now, head on over to Caleb’s GoBionic Trail review for more details.