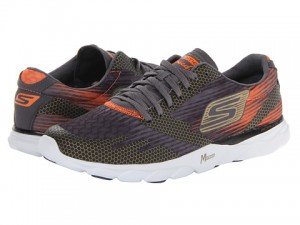 Skechers got a big boost when Meb Keflezighi won the Boston marathon earlier this year. For a brand that has been historically known more for casual shoes and kids shoes, having an elite American marathoner win Boston in their footwear was evidence that the Skechers Performance Division is making legitimate running shoes. They’ve since signed Kara Goucher as well, and are making a push to further develop their performance line.

In this post I’ll be taking a look at the Skechers GoMeb Speed 2, which is the Skechers Performance Division’s racing flat. The shoe has been out for a while now (Meb wore a v3 protoype in Boston this year), but it’s a shoe I’ve really enjoyed running in, and I wanted to share my thoughts.

The GoMeb Speed 2 is clean shoe with some flair – it looks the part of a racing shoe.  It’s not the best looking shoe out there, but I’m not turned off by it either.  The design of the shoe is simple and somewhat traditional for a racing flat. It has a single layer mesh upper with light overlays that are welded on for a seamless fit.  It does have a heel counter – I have not had any problems with it. 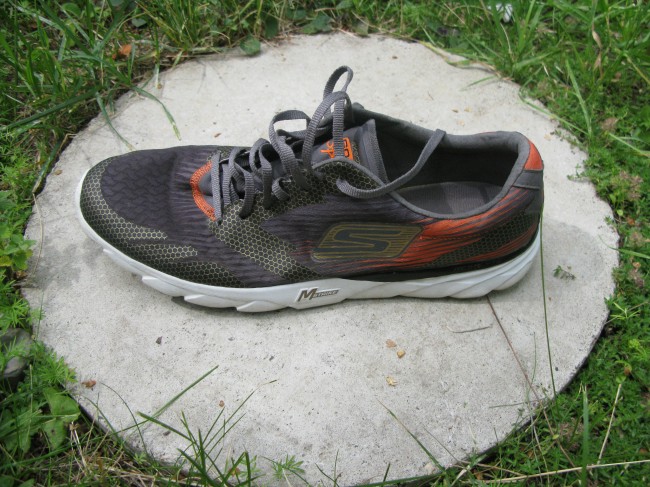 The midsole and outsole are one in the same except for some circular “Go Impulse Sensors” of rubber from the midfoot to forefoot.  It also has a plate in the midfoot to provide some structure and pop to the shoe.

To hear more about their design philosophy with the GoMeb 2, here is a video featuring Kurt Stockbridge from the Skechers Performance Division: 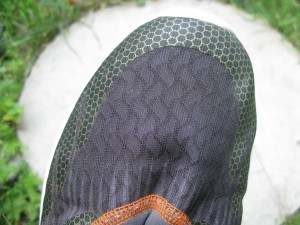 The upper is made of a monofilament mesh that is soft to the touch, but doesn’t stretch much (which I like in a racing shoe).

The midsole is Skechers’ proprietary Resalyte compound and it feels quite resilient (meaning it bounces back well; for example when you push your finger into the side of the midsole it will spring back quickly; some midsoles do not do this. New Balance’s RevLite comes to mind as a foam that is not very resilient). According to Skechers the midsole compound is a 57c firmness. I don’t have enough reference points to compare this to (other than the GoRun 3 is 50c, as are most other Skechers shoes, and the GoRun Ride 3 is 47c – lower numbers indicate softer shoes), but the shoe feels fairly dense and firm underfoot (although I don’t feel like it is a super firm when compared to many racing shoes; more on that below).

From some discussions on the internet with others who have tried the shoe on or run in it, the relatively narrow fit seems to be the biggest deal breaker. For me, the fit is fairly good for a racing shoe.  It fits snugly throughout and holds the foot well.  At speed, it is very comfortable and I would have no issues running a marathon (or further) in them.  Others have reported that the shoe was too narrow and tight.  I should say that I almost always run without socks and this can make a big difference (especially depending on the thickness of socks you choose) with fit for a shoe like this.

If I were to change anything about the fit, it would be to give it just a little more width in the forefoot. The shoe did fit about a 1/4 size long on me so I would shorten that up and make the shape a little less pointed. I’ve spoken with Kurt from Skechers a bit about the shoe and these two tweaks are something that the team there is strongly considering for future versions of the Speed (Editor’s note from Pete: I have run in prototypes of the GoMeb Speed 3 and the fit is much better on my foot – I was one who found the 2 to be a bit too narrow). 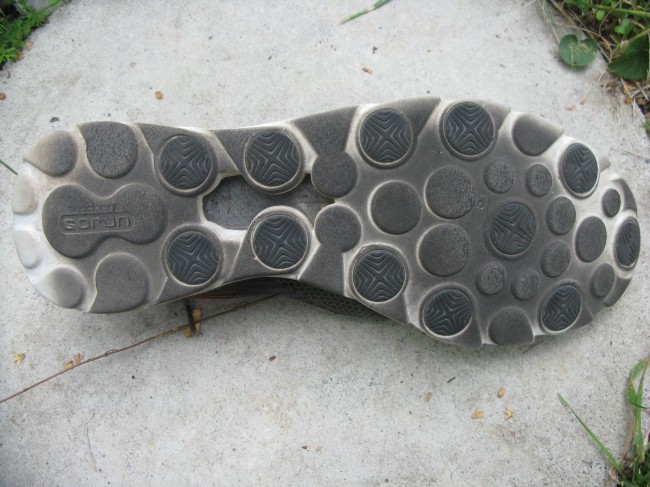 This is where the Speed 2 really shines.  While the shoe is firm enough to feel fast and racy, the team at Skechers Performance managed to make it very forgiving and somehow substantial enough to be a very practical marathon shoe (I really see this as a long run racing shoe because of the stack height, not a 5k/10k shoe, though it would be fine for those as well).  I just took them on another 8 mile run and even at an easy pace of 7:30-8:00/mi they feel as smooth as butter. This holds all the way to 5k race pace for me (have yet to take them on the track, but I have no reason to assume they would perform poorly there either). Many racing flats I’ve tried do not feel that great at 8:00 pace (many adidas adizero shoes for example feel fine at 6:30 and under, but somewhat stiff/harsh at slower paces).

I really appreciated the higher stack height (14mm forefoot/18mm heel) for a shoe of this weight. Plus, the foam is dense enough that it feels quite protective. The shoe feels rather level as you would infer from its 4mm offset, but still has a great dynamic feel and it transitions very smoothly and quickly from midfoot to forefoot.  I don’t heel strike much so can’t completely comment on how it would ride for those who do, but given the 18mm stack and density of the midsole, I would guess it would be more than capable of handling a more rear foot strike (Meb himself, after all, seems to land more rear foot from most pics I’ve seen).

Lastly, the addition of the Dupont Hytrel shank in the midfoot really helps this shoe feel more structured for the weight (you can see the shank in the central sole cutout in the photo above). I think without that, as the midsole broke down, the shoe would feel progressively more dead.  As it is, it rides a great line between flexible and substantial for a racing shoe.

I will be as bold to say that the Skechers GoMeb Speed 2 is quite possibly the best racing shoe I’ve run in. It is very versatile with its relatively higher stack and level of cushion. It can handle longer runs, but at 6.8 oz it is light enough to feel great (and downright comfy) even at 5k pace. This is not as true for me of other racing shoes I’ve run in like the Adidas Hagio, NB RC1600, and inov-8 Road-X Lite 155. They all are much thinner and very firm – they feel fast, but don’t offer nearly as comfortable a ride as the Speed 2 does.

If Skechers can continue to refine the GoMeb Speed, I see it slowly rising to the top of the pack for marathon racing options. Additionally, and very important to me, it is one of very few true marathon racing shoes I know of that comes in at a 4mm offset; the Adios 2/Boost, Nike Streak 5, New Balance 1400v2, etc. all seem to be solidified at a 10mm drop.  I’m very impressed with the Speed 2 and would wholeheartedly recommend it.  I’m also excited to give the Speed 3 (the shoe Meb wore to win Boston this year) a try to see what improvements have been implemented for that shoe.  I believe it is to launch in November 2014.

The Skechers GoMeb Speed 2 is available for purchase at 6PM.com for as low as $44.99 right now (6PM is the Zappos clearance site – the shoe has been out for awhile and is being updated in the Fall). It is also available at Shoebuy.com for both men and women (you can take 20% off with code 20July). Purchases from these sites help to support Runblogger and help us to publish detailed reviews like this one – your support is very much appreciated!