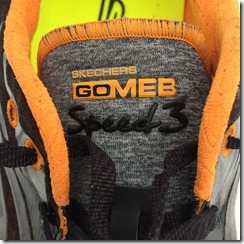 Among the Skechers Performance lineup of shoes, my favorites have been the GoRun and GoBionic models (unfortunately the latter is being discontinued). I ran in the GoRun Speed 1 and 2, but the shoe was not a great match for me. A little too narrow, a little to firm under the heel for long distances, and a bit too much stack and weight for shorter speed workouts/races. It just didn’t fit well into my training arsenal.

I received my first wear-test pair of the Skechers GoMeb Speed 3 last February and I was impressed (Disclosure: I’ve been helping Skechers out with shoe development for several years). The prototype that I received felt markedly roomier with a stretchier upper mesh, felt considerably more flexible, and had a more resilient/bouncier feel underfoot. It felt like a very different shoe from the previous models (note: the name has been changed from GoRun Speed to GoMeb Speed). 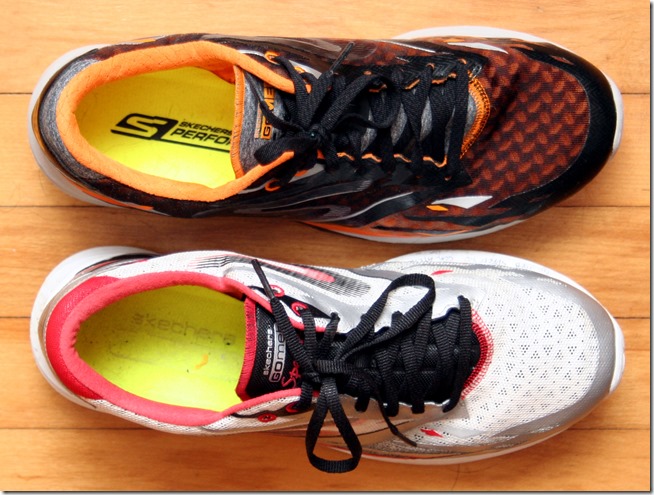 As often happens in the development process, things change as shoes develop from one iteration to the next. Skechers receives input from a lot of wear testers, and this particular shoe is designed and named for 2014 Boston Marathon winner Meb Keflezighi. As a result, Meb has a lot of input into the design. Though I loved the first iteration I received, it felt a bit less like a race shoe and more like the GoRun to me, and that needed to be fixed. In particular, the sole had an incorrect plate (visible in midfoot region of photo below) so was not as stiff as intended, and the upper material was changed to one with less give for a more performance fit (that’s how I interpreted the changes). 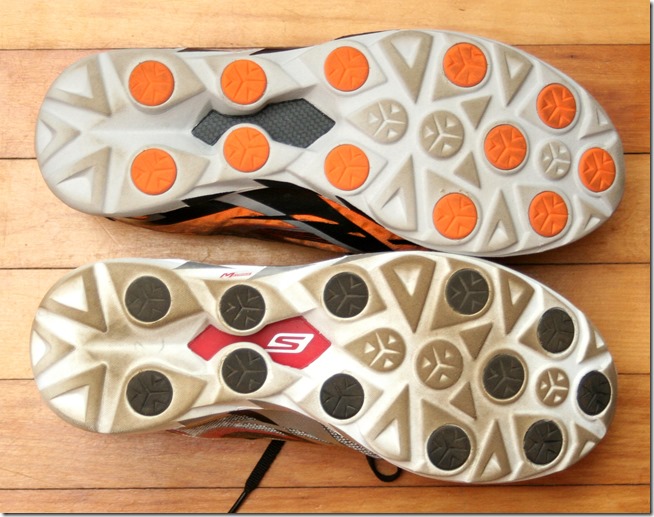 Fortunately, the next protoype ran just as well as the first one. The sole still felt a bit more resilient, and the shoe had a slightly stiffer, racier feel to it. Though the upper material had less give, it still felt a bit roomier than the GoRun Speed 2. 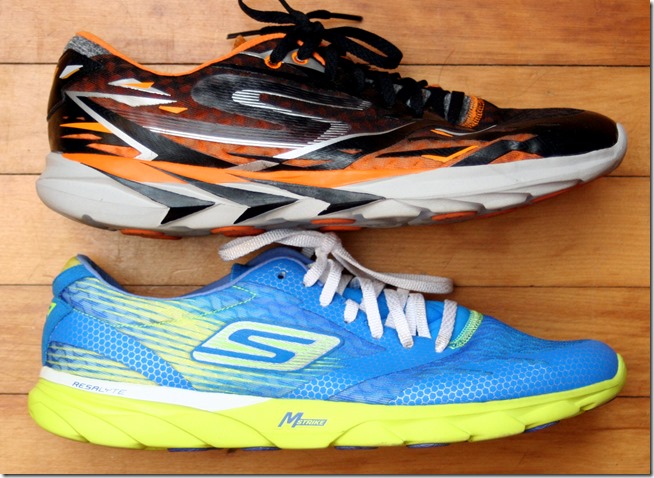 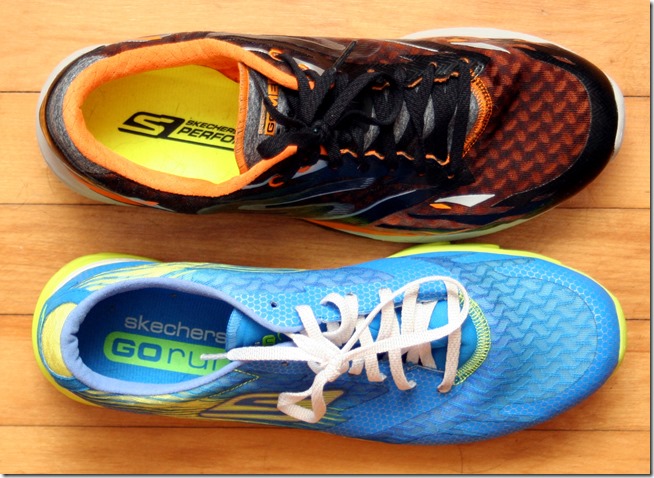 One of the things that puzzled me about the GoMeb 3 was why the sole felt more resilient. The midsole firmness didn’t really feel any different, and after inquiring I think we figured it out. One of the changes to the sole in v3 was that they opened up the concavity under the midfoot a bit and extended it backward under the heel. This allows for a bit more downward deflection of the heel under pressure (more open space under the foot), and gives the shoe a bit more bounce (not sure if that’s the right word to use, it’s hard to describe the difference in words). The photo below shows the difference in the size of the concavity well – it’s amazing how such a seemingly small change can alter the feel of a shoe so much: 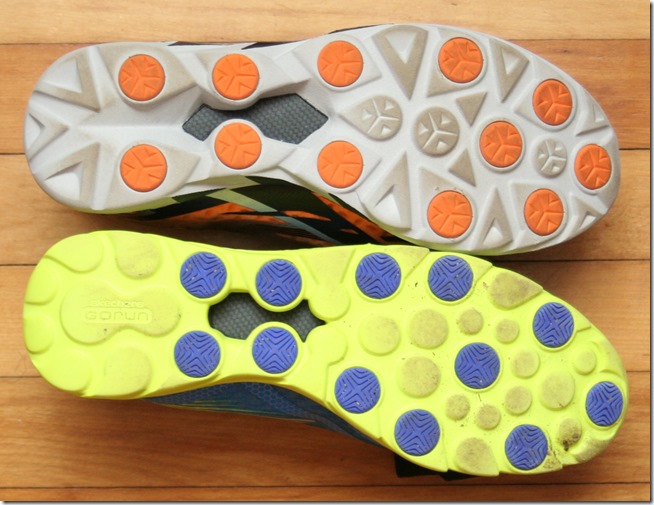 Skechers GoMeb Speed 3 (top) and GoRun Speed 2 (bottom) – note the larger concavity under the midfoot of v3; it also extends back under the heel

Other changes from v2 to v3 include a slightly more padded ankle collar, and a softer interior lining of the upper which makes for more comfortable sockless running. The GoMeb Speed 3 also gains a bit of weight over v2 – the size 10 production shoe that I have (NYC version) weighs in at 7.9 oz vs. 7.2 oz for my Speed 2 in the same size. I don’t really notice the difference on the run. I’m pretty sure the stack height has remained the same at 18mm heel, 14mm forefoot.

As sometimes happens in the shoe development process, features are added that generate some amount of passion and controversy. In my review of the Skechers GoRun 4 I discussed my feelings about the addition of a Quick Fit Portal to the tab behind the heel. The QFP is a hole that you can slip your finger through to help pull the shoe onto your foot. I received a prototype of the GoMeb 3 that had a QFP (see photo below) and didn’t think it was a good idea in a shoe with a stiffer heel counter than the GoRun. I could feel the margins of the portal against my skin and felt that the risk of abrasion outweighed any benefit. Fortunately it was decided that the QFP would be left off the GoMeb. 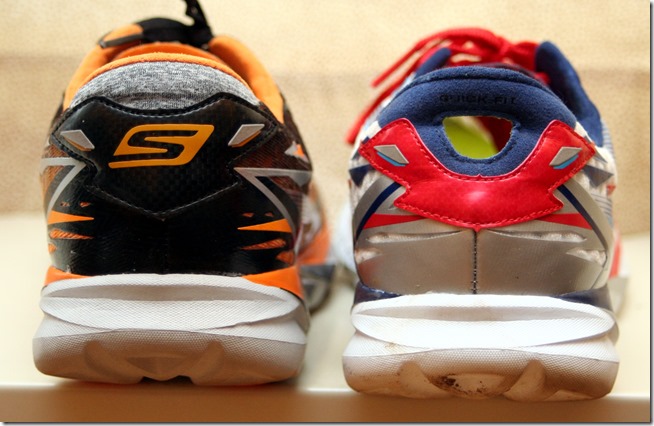 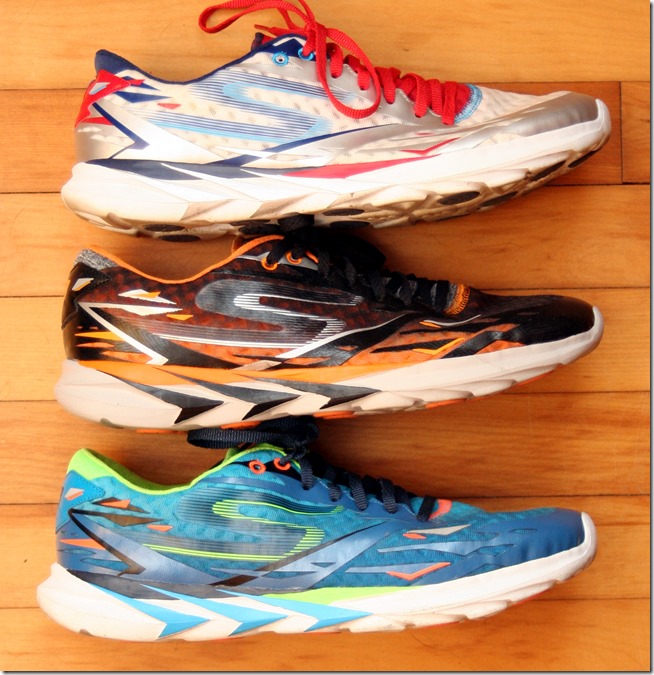 In all, I went through four iterations of the GoMeb Speed 3 to arrive at the final version, pictured below. The end product is a really nice looking shoe that feels like a much better match for my stride. It’s still a firm shoe, but it has a bit more spring under the heel, and the fit up front is just a tad more forgiving.

I raced a 5K in the GoMeb 3 last Spring – wasn’t my best race but I don’t blame the shoe. It’s a bit more shoe than I Iike for a 5K (Skechers needs a sub 6 oz speed flat!), but should serve well as a 5K race shoe for many. More importantly, it’s now a shoe that I’d be willing to use for long miles and races up to the marathon.

I’m very impressed with what Skechers has done in this update to the GoMeb Speed. The changes aren’t huge, but are just enough that both the fit and ride are much more to my liking. It’s a great looking shoe, and it’s tough to argue about performance – it is Meb’s marathon shoe after all, and was on his feet when he won Boston last year. If you’re looking for a racing shoe that’s a bit more forgiving than the typical flat, the GoMeb Speed 3 would be a great choice.

For some additional thoughts on the GoMeb Speed 3, see this video review by Caleb Masland.

The Skechers GoMeb Speed 3 sells for MSRP $120 and can be purchased at Running Warehouse and Shoebuy.