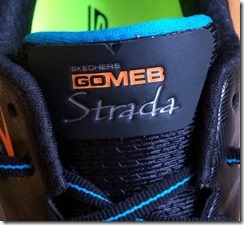 Last week I reviewed Meb Keflezighi’s racing shoe, the Skechers GoMeb Speed 3. In this post I’m going to introduce you to his training shoe, the Skechers GoMeb Strada (I believe Kara Goucher is also training in this shoe now). I’ve been involved with the development of the Strada since late 2013, so the shoe has been in the works for quite a long time. I’m going to keep this post brief since I’ll be writing a full review in a few weeks – just waiting to get a few runs in a final production sample that is en route.

The GoMeb Strada is essentially a cushy, neutral shoe (think Nike Pegasus cush) with a rubberless sole. Instead of a traditional outsole, Skechers opted to make the sole from two types of foam – a softer foam for the majority of the midsole, and a slightly firmer, more abrasion resistant foam that extends from the outside of the heel, across the midfoot, and up under the big toe (black regions in the photo below). The bit under the big toe is an interesting approach since it provides a bit of stability during late stance phase – I tend to really squish this area in a shoe like the Pegasus, but the Strada worked very well with my stride.

In my full review I’ll provide more detail on specs, fit, ride, and run through some of the differences among the many iterations of the shoe I tried during the development process. The Strada will be released on February 1. For now, I’ll leave you with some photos: