Home / Blog Posts / Skechers GoRun 2 Review: How a Running Shoe Update is Made

Skechers GoRun 2 Review: How a Running Shoe Update is Made 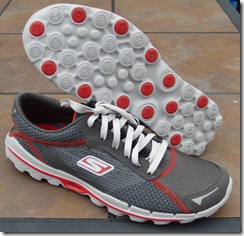 Back in the summer of 2011 I was contacted by the design team from the Performance Running division at Skechers to see if I wanted to try out a new shoe that they had developed. The shoe was the original Skechers GoRun, and it was the first offering from the Go team at Skechers.

I reluctantly agreed to try the shoes (I had previously had some negative experiences with the company), but wound up being impressed by them. They were light, flexible, and had one of the best uppers I had ever put on my feet. Since then, I have developed a close relationship with the Skechers performance running design team, and have helped them fine tune a number of shoes that have come out since (Go Bionic, GoTrail, and several more in development). I should emphasize that I have done this on an entirely voluntary basis, having accepted no payment other than the shoes that they provide for me to test out.

The original Skechers GoRun was a shoe that people either loved or hated (read my GoRun 1 review here). I know quite a few people who tried them on and immediately were turned off due to the pronounced “bump” under the midfoot. The shoe was designed with an unusual sole that was actually thicker in the midfoot region than in the heel or forefoot. Combined with a pronounced sole rocker, this made it feel as if you were rocking backward off the shoe when standing in them, and I found them uncomfortable to walk in. However, once I got running in the GoRuns the sensation went away. I know a bunch of runners who are big fans of the shoe.

In early discussions regarding the update to the GoRun, Runblogger columnist Nate Sanel and I indicated that if Skechers wanted to make inroads among serious runners, the midfoot bump sensation would have to be reduced. The design team agreed, but also didn’t want to completely remove the bump since many people who were fans of the original liked it because of the unique sole design. The compromise was a shoe in which the bump sensation was reduced, but not completely eliminated. That is probably the biggest change that appears in the GoRun 2.

I was shipped the first version of the update to the original GoRun last summer, and subsequently ran in a series of iterations of the GoRun 2. The most obvious thing I noticed in the first GR2 prototype was the reduced midfoot bump. I could now stand and walk comfortably in the shoe, but there was still a sensation of greater sole thickness in the midfoot area. I was totally satisfied with the compromise. The upper had been changed a bit, but it was still soft and stretchy and felt great on my feet. There was one exception though, and I had been warned of this by Skechers before I got the shoe – the overlays on the sides of the shoe had been built incorrectly at the factory (apparently this kind of thing is not uncommon). They were a heavy plastic material – rather inflexible and hard (you can see it on the shoe below).

Fortunately, the overlay issue was fixed in iteration #2, which interestingly I received quickly and without any Skechers logos!:

I had two additional issues with the first iteration of the GR2. First, I was experiencing impingement and irritation from the seams at the bottom of the lace-row. A decision was made to move the forefoot seam at the base of the tongue back a bit, and the seam extending from the outer lace-row down the lateral forefoot was eliminated. This solved the abrasion issue for me, but I have heard from a few people who are still experiencing problems in this area (likely a foot-shape specific issue I’d guess).

The second issue that both Nate and I experienced was a distinct feeling of pressure under the central forefoot from a rubber “sensor” that was added in that area. It got to be irritating after a few miles, and after we both commented on the problem the rubber patch was eliminated (see photos below for the before and after versions of the sole). 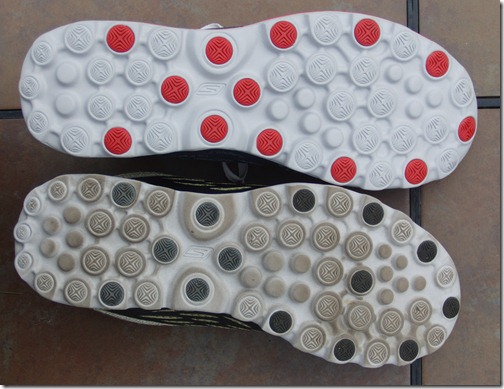 Skechers GoRun 2 – final production sole (top) and first iteration sole (bottom). Note the rubber lug in the center of the forefoot that was removed in the final version.

We probably went through 4-5 versions (at least that I was involved with) before arriving at the production model. Most of the big issues were caught after the initial iteration, but small tweaks to things like forefoot width were made as the final version was honed in. The result is a shoe that I have come to love, perhaps since I spent so much time with it over an extended period of time.

The production Skechers GoRun 2 is in my opinion one of the best distance shoes I have worn. I’d put it right up there with the Saucony Kinvara, A5, and Virrata (and maybe Brooks PureCadence 2) as a contender for the shoe that will be on my feet this spring when I run the Vermont City Marathon. The sole has a softness and flexibility that I really enjoy over long distances, the upper is once again fantastic, and though it is a tad narrower in the forefoot compared to the original GoRun, there’s still plenty of room for my feet and the stretchy upper makes it even more accommodating.

To emphasize once again, since this will be the most frequently asked question, the midfoot bump is still present in the GR2. However, it is markedly reduced, and for me it has essentially become a non-issue. I’ve spent entire days wearing this shoe, and have run quite a lot of miles in the various iterations, and never once did I feel any discomfort from the sole contour.

For technical specs, the production GoRun 2’s weight in at 6.7oz in my size 10 (weighed on my own scale), and the sole dimensions are 11mm forefoot, 20mm midfoot, and 15mm heel. This is 1mm thicker at each point than in the original GoRun. Although the midfoot is still thickest in the GR2, the bump sensation was reduced by reducing the sole rocker/curvature and reducing the prominence of the arch support. Due to the change in the sole rocker, you don’t get the same sensation of falling back on the heel when standing in the shoes, and the heels don’t feel like they are bottoming out when you walk in the shoes.

I have to admit, being able to take part in the design process for a running shoe is quite a cool experience. As I write this, a commercial for the GoRun 2 just appeared during the Super Bowl. To think that a product I was able to provide input on would show up in front of such a large audience is a bit humbling (and to give credit where it’s due, I played only a very small role – Kurt, David, and Kathy at Skechers did all of the hard work!). Blogging has taken me places I never could have imagined just a few years ago!

You can view the GoRun 2 Super Bowl commercial below:

If you have any specific questions about this shoe, I’m happy to address them in the comments!

The Skechers GoRun 2 can be purchased at Zappos

For another take on this shoe, view the Skechers GoRun 2 review on Believe in the Run.

You just finished reading Skechers GoRun 2 Review: How a Running Shoe Update is Made! Consider leaving a comment!