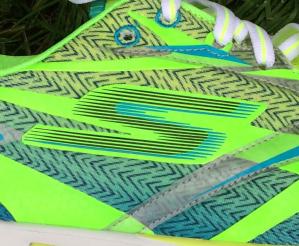 I first ran in a prototype of the Skechers GoRun 4 on a cold, slushy day earlier this year. I’d heard hints that the shoe was substantially changed from previous versions, but didn’t know much beyond that (I had heard that it was more Kinvara-like than previous versions, no complaints here with that comparison!). Upon opening the package when it first arrived, it was clear that this shoe had indeed undergone a top-to-bottom overhaul, and I liked what I saw.

My first run in the shoes convinced me that Skechers had produced something special in the GR4. It was one of those runs where everything just felt right, and I wound up running way faster than I intended to at the outset. I emailed my contacts at Skechers right after that run and told them the shoe was nearly perfect even though it was still an early prototype. They had nailed it. Over the Spring and Summer I ran in several subsequent iterations of the shoe. Changes were not substantial, though there were a few that spurred some debate among wear testers and the design team (more on this below). The finished product is set to be released on November 15, and I’m excited to see how it will be received.

Skechers has given me the go-ahead to post a full review, so here goes! 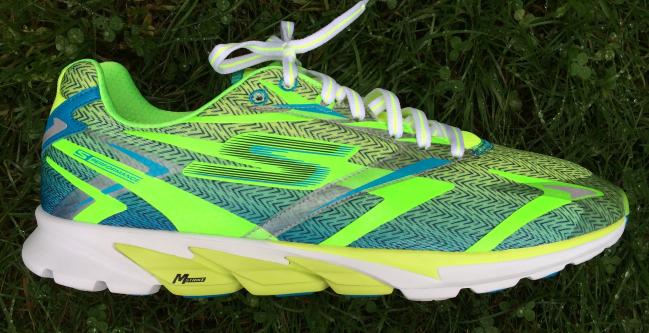 So what has changed in the GoRun 4? Well, pretty much everything. New upper, new sole – it’s a complete re-design. That being said, fans of previous versions should not be worried that their favorite shoe has been ruined. My take is that the ride retains some of the feel of previous versions, but in a more refined package. It’s a really nice shoe.

The GoRun 4 adds a bit of weight over previous versions, mainly due to a slightly thicker midsole – specs sent to me by Skechers indicate a weight of 7.8oz in men’s size 9. As such, it’s still a pretty lightweight shoe. Midsole thickness is 18mm heel, 14mm forefoot for 4mm drop. The included 3mm forefoot, 7mm heel sockliner adds 4mm to the drop (8mm total), but it is removable and there is a finished footbed underneath.

The upper of the GoRun 4 is composed of a outer layer of tightly woven mesh over an inner layer of more open mesh. It does a good job of keeping road debris out, but breathability is compromised a bit by the tight weave. The fabric is reasonably stretchy, but does a good job of holding the foot in place. The upper is minimally structured with welded overlays and a few stitched overlays providing most of the support. A thin, flexible heel counter was added after the initial prototype to help maintain structure in that area. I was initially opposed to this, but it’s so flexible that you barely know it’s there. Inside the heel the shoe is lined by a soft, padded mesh that feels good against a bare foot. The tongue is also nicely padded and I have not had any issues with it slipping. 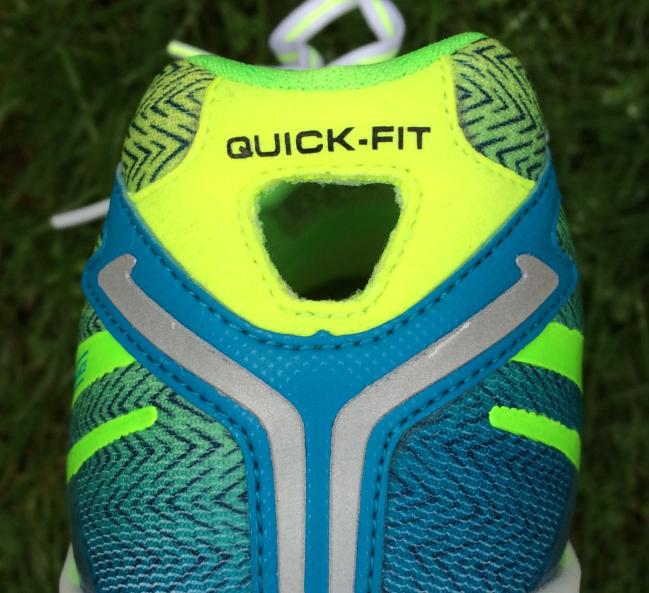 One of the biggest points of debate about the GoRun 4 was the addition of a feature called the QuickFit Portal (see photo above). Basically, the QFP is a hole in the back of the shoe that is intended to be used as a finger-loop to help pull the shoe on quickly. I had major concerns about potential for abrasion against the skin from the margins of the portal, but after multiple sockless runs by myself and other wear testers it seemed to be benign. I still advocated leaving it out, but I didn’t win that battle.

In terms of fit, the GoRun 4 is similar to previous versions, maybe just a tad snugger up in the forefoot. It’s by no means a tight-fitting shoe – fits my average-width foot just about right. The insole is removable, and the footbed underneath is finished, so if you need a roomier fit removing the insole should do the trick.

As mentioned under the “Specs” section, the GoRun 4 gains a bit of thickness in the midsole (3mm more than the GR3 in both the heel and forefoot), and as such the shoe provides a bit more cushioning than previous versions. The Resalyte midsole retains the softish feel of previous versions, and also remains quite flexible. The sole feel is somewhat reminiscent of the Saucony Kinvara 5, which is probably a reasonable shoe to put in the same category with the GR4.

It’s worth noting that I did not get a strong sense of a midfoot “bump” in the GR4 as I have in previous versions. The bump seems to have become be less pronounced in each subsequent iteration.

As is typical of most Skechers shoes, there is very little outsole coverage on the GoRun 4; just a few rubber pods around the margins of the shoe. If you tend to grind up the heels of your shoes on asphalt, that will be a potential durability issue with these.

I’ve found the sole of the GR4 to be a great fit for my stride. It is on the soft side as far as shoes go, so those who like firm shoes may want to look elsewhere. However, if you like a bit of cush, the GR4 will be too your liking, and it has enough sole to handle running long distances.

I don’t often get wowed by a shoe after a first run, but that was my reaction to running in the Skechers GoRun 4. It ticks nearly all of my boxes: moderate drop, softish sole, near-perfect fit (on me), decent flexibility, etc. This is easily my favorite version of the GoRun so far, and I suspect it will be a hit when released in mid-November.

What do you think? Excited about or skeptical of the overhaul of this shoe?

The Skechers GoRun 4 is now available at Running Warehouse and Shoebuy.com.

Update: A few people asked about other colorways of this shoe. Below is a photo of some of the different versions I have, not sure which colors will be among those in final production models. 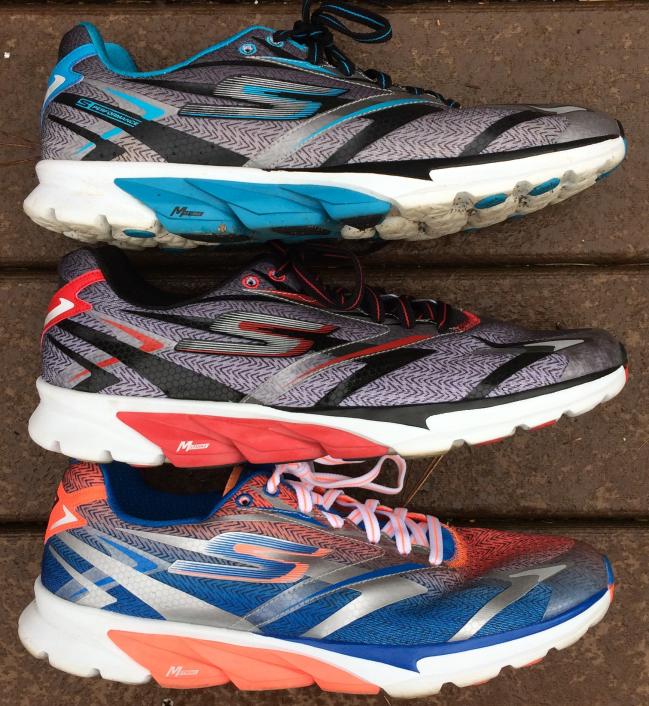