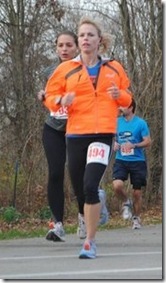 If you’ve read my recent review of the Skechers GOrun, you’ll note that I was somewhat surprised by how much I liked running in the shoe despite the somewhat awkward feel that you get when simply standing in them. I’d still prefer that the shoe not have as pronounced a “bump” under the midfoot, but that is my only serious complaint – this could be a great shoe with a few minor tweaks.

Given the somewhat unusual geometry of the sole of the GOrun, I was curious to get a second opinion, so I asked my friend Melodie (photo at left, in Altra Intuitions) if she would be willing to give them a try and report back. My reason for asking Melodie is because she has had a long-term bout with plantar fasciitis, and one of the things I noticed about the shoe is that it does not irritate my feet as much as some other cushioned shoes do – I suspect it may have something to do with the pressure that the bump applies to the front of the heel during stance (however, I have a reduced bump prototype that feels good as well…). Mel is a Boston qualifier and a high mileage runner, so I figured she’d be an ideal candidate to put them through the ringer. 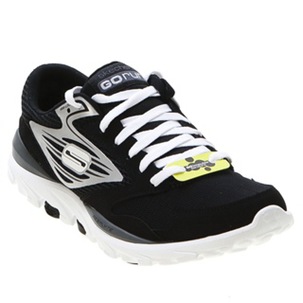 I had my contact at Skechers send Melodie a pair of GORun’s, and here the report she sent me after her first run in them:

“I went sockless in them.  Absolutely NO RUBBING or irritation.

I have very high arches, and PF in both feet.  With the left foot being the one that is really angry right now.  Right foot is at bay.

I liked the way the built up middle pushed against my arch when I ran.  It really took a lot of pressure off the heel.  I’m not a heel striker.  But somehow, it took pressure off, maybe by eliminating some overstretching of the connective tissue?  It seemed to roll and massage the arch (where the PF is stretching from the heel forward).

Don’t know what will come of it.  But out on my first run, 5 miles, initial thought is they are very light, very comfortable, stretchy, no rubbing, no pains…so far, so good.  Lets see how durable they are!

Thumbs up after first run!”

Melodie has since gone on to wear the GOruns for a few more weeks (in socks for the remaining runs), and wrote up a more detailed report:

After several 5-mile runs, speed training, a half-marathon (she set a PR), and multiple cross-training classes, I have come to appreciate several features of the Skechers GOrun. They are extremely flexible, allowing a natural movement in any task. The light weight and flexibility reminds me of a “Nike Free” type experience.

The design of the GOrun provides for a more natural stride. The mid-foot section of the sole is thicker and rounder than normal, encouraging a mid-foot strike versus a heel strike. The mid-sole build-up is not as exaggerated as the Skechers’ “Shape-Up”, which gives that shoe an awkward appearance, in my opinion. The GOrun is slightly rounded at rest but flattens when worn.

I have very high arches and plantar fasciitis (PF) in both feet, and the GOrun provides ample support for me. In fact, the support feels very good as I run. The mid-foot rise gently pushes into my arch and feels like a gentle, rolling massage. I’m not saying you will feel the same, but with my high arches and PF, that’s what I felt.

I find that I am reaching for my GOruns when my PF is hurting and I am heading out for a 5 mile run or a workout. My feet do not ache after a run and I set a personal half-marathon record in my GOruns. So if you are in the market for a lightweight, minimal shoe, the GOrun by Skechers is an excellent option. They have claimed a place in my shoe rotation. Can you believe that? Skechers!

Like Melodie, I have continued to run in the GORuns, and I have continued to have a positive experience. I just ran a few miles in a flatter prototype pair yesterday, and they are making progress – performance running is a new area for the company. I should note that I am receiving nothing from Skechers other than a few pairs of tweaked shoes to try out in exchange for some feedback (essentially a wear testing arrangement). My only interests are in trying to get better shoes on the market, and a hope that I can get them to make a flat kid’s version.  Like the company or not, the GORun is a surprisingly decent shoe.

(UPDATE Dec. 2012: With a new update to the GoRun now out, the original Skechers GoRun can be purchased for as little as $36 at Amazon.com. The GoRun 2 will be reviewed soon here on Runblogger)

The Skechers GoRun is available for sale at Zappos.