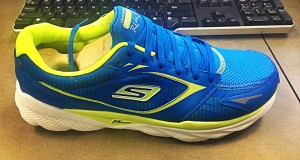 My first pair of Skechers Performance running shoes was the GoRun 2. I loved those shoes. They gave me a breath of fresh air from the stuffy, typical norms that I found in most running footwear, so I was very excited when the opportunity arose to do some reviews for Skechers. I received the GoRun Ride 3 shoes as review samples from Skechers, free-of-charge. (Full disclosure: since receiving these shoes I’ve accepted a Brand Ambassador position with Skechers Performance Division)

I’ve never owned any of the Ride series of the Skechers GoRun shoes, so I came into this review with no real expectations. As it’s sometimes hard for those new to Skechers running shoes to keep track of all the different names and versions, I’ll place them on a general spectrum – starting at most “minimal” to most “maximal” shoe in the line:

Skechers have really stepped up their game when it comes to aesthetics. Previous iterations have come in neon greens, pinks, and various other cartoonish colorways which seem to have passed out of favor a bit lately. It was cute for a little while, but we’re back to business now with more conservative colorways.

Slipping into these shoes for the first time was a real delight, and reminded me of why I became a fan of Skechers in the first place. These shoes, although considered a more cushioned and supportive shoe, are very light and very soft. The upper has a sock-like fit with no heel counter (the rigid backing that goes behind your heel in many traditional running shoes), so it really is like putting on a pair of slippers. Skechers provides the option of running with or without the insoles, allowing a runner to choose their own adventure. I chose to run with the inserts in (perhaps a residual effect to being prescribed orthotics by a doctor years ago), but found them to still be very comfortable without them. The toe box has tons of room with absolutely no toe crowding, but I believe this would prove to feel a bit sloppy if you were trying to do some uptempo running. For easy running, this is a non-issue.

Another non-traditional aspect of these shoes is the outsole. It is primarily a foam construction with what Skechers calls “GOimpulse sensors and pillars”, which I believe to be the rubber lugs that are dotted around the outsole. This allows the shoe to be extremely flexible and allows you to have full range of motion to bend and flex your toes naturally. Initially, I assumed that the durability would suffer due the materials used, but they still look to be in great shape after about 100 miles. 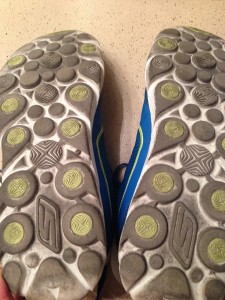 Outsole of the GRR3 after 100 miles

I will say that the GoRun Ride 3 seems to be the most “traditional” shoe within the line, while being anything but traditional. They are comfortable and cushioned, while still allowing the foot to function naturally without forcing them to sit put like many shoes in the same class. The low heel-to-toe offset was also nice, as I typically feel most natural between 0-4mm. Compared to the other trainers I’ve worn recently, this was very refreshing. I enjoyed using these shoes for long and easy runs that didn’t require a lot of responsiveness or ground feel. They seem to hold up surprisingly well, making them a great value shoe at $80. 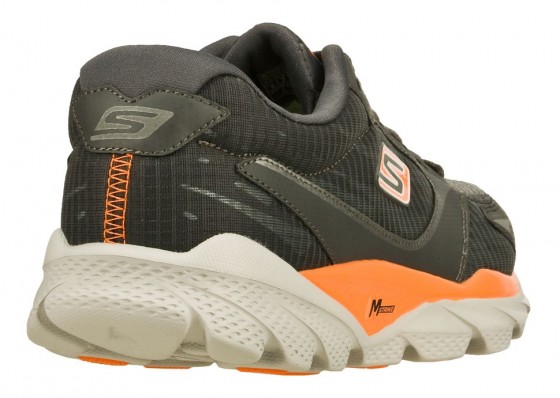 The Skechers GoRun Ride 3 is available for purchase at Skechers.com, Amazon.com, and at Shoebuy.com (get 20% off with code 20MARCH through 4/1/2014).

The Women’s GoRun Ride 3 can be purchased at 6pm.com for under $60.