Skora Fit Review: The Shoe I Wanted To Love 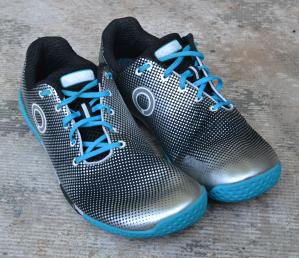 This is my first post on Runblogger, so before I get to my review, I’d like to tell you a little bit about myself.

I’ve been running more or less since 1995, when I decided to run Cross Country in High School.  I picked up Track almost as an afterthought.  By the time I’d graduated, I was a 4:41 miler and ran 17:26 in the 5K (back when those numbers actually meant something). After taking a year off from competitive running, I had a failed attempt to make the XC team at the University of Cincinnati.  I ran semi-consistently during my college years, partially because I was working at one of Cincinnati’s premier running stores (a nice discount on both shoes and race entry fees helps!).  My post-college years were a lot less consistent and by year two of married life, I was 50lbs over my highest competitive weight and very out of shape.  I started getting back to it, dropped 30lbs and change, and, despite some injuries, am back in the 20-25mi/wk range.  I’ve gotten to where I can run every day on my lunch break and take my weekends off, which is very important because it gives me family/chore time back.

It’s worth mentioning that I run exclusively sockless. Racing, training, Winter, Summer, it doesn’t matter.  I have not run with socks on in well over a decade and never plan on doing it again.  More on that later.

I’ve dealt with several injuries over the years, with everything from a tibial stress fracture on my left leg in high school to cuboid/peroneal issues on the same foot at the beginning of this year.  In fact, that last part makes a nice segue to where our review begins.

Skora, as you may know, is a Seattle (formerly Portland)-based company specializing in well-made minimal shoes primarily for running, though they are marketed for all kinds of training as well due to their lower stack heights, increased ground feel, and durable outsoles.  They offer both leather and synthetic uppers on either of two lasts, the R01 and R02.

My first introduction to Skora was the Phase (red shoe in the photo below), built on the R02 last, which relies on its Injection-Blown Rubber (IBR) outsole for the shoe’s only cushioning.  They were comfortable, but the upper was too high-volume, the lacing could never be tight enough, and the outsole was just too thin.  After an hour-long run, I found that I could barely walk the next day.  That was enough for me—I ended up missing nearly two months’ worth of running with Cuboid Syndrome in my left foot.  I still walk around in them from time to time, but they were retired from running at 200mi.

Given my troubles with the Phase (lacing and cushioning, mostly), I was excited when I saw that Skora was releasing an affordable new shoe (called the Skora Fit) on its R01 last that would have a breathable upper, better lacing than the Phase, and more dense outsole rubber for good durability.  It would be light, zero-drop, flexible, with more than enough cushioning (16mm stack height in both the heel and forefoot).  Sounds great!

Here is the Fit at 60mi with my old Phases and my then new Mizuno Wave Hitogamis: 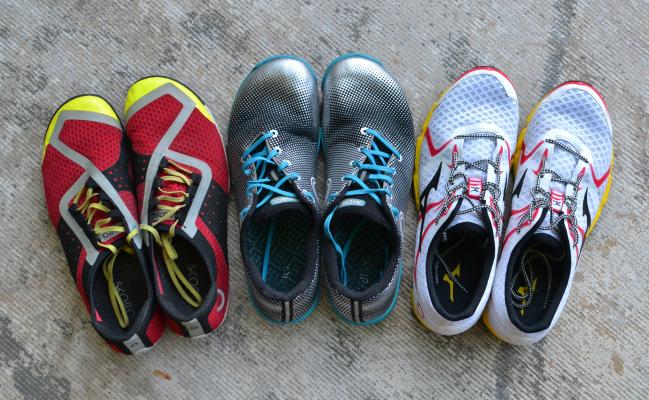 Skora pride themselves on having durable outsoles.  I’ve seen several pictures on their Facebook page of shoes with hundreds, and some with over a thousand miles of wear.  I have never gotten that kind of mileage out of a shoe, pretty much considering myself lucky to reach 300mi no matter what I’m wearing, be it minimal flats or beefy motion-control shoes.  Here is a shot of the outsole at about 60mi:

And here are some shots at 120 miles: 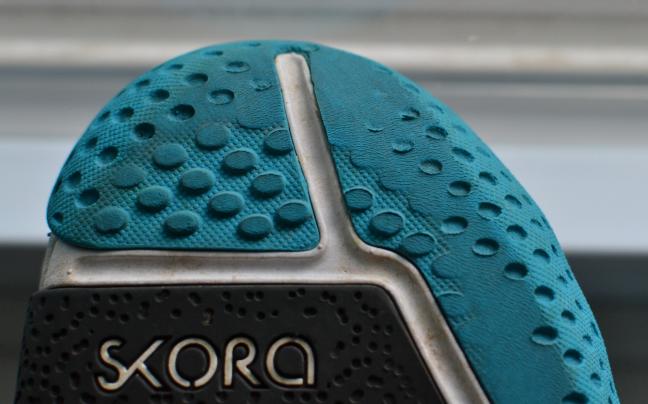 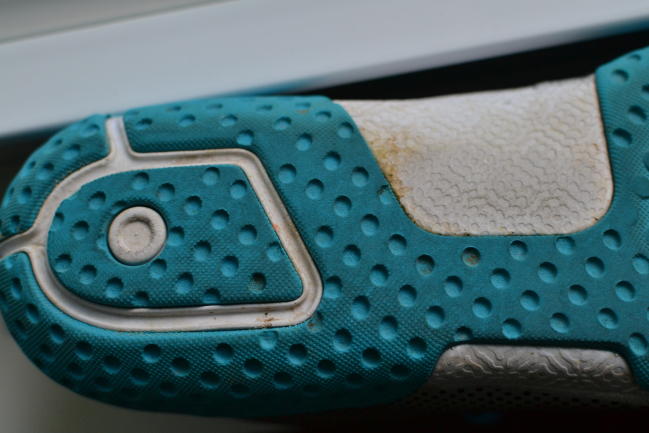 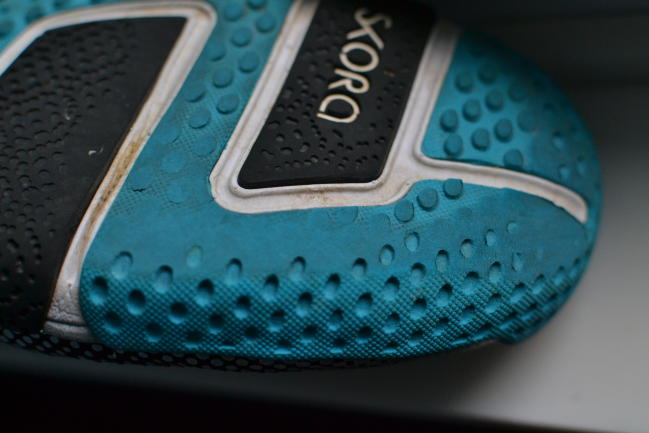 All of the shots above are of my left shoe, which traditionally wears harder.  I think something in my stride is just not working with these shoes if you note all of the toe/forefoot wear.  If you look at the heel (see photo below), you will see what really didn’t work for me: the shoe’s rounded heel.  This feature, referred to by Skora as the Real Heel, is touted as allowing natural foot motion.  In my case, that is a bad thing.  The ease of rolling in from the heel often caused me some semi-painful ankle eversion.  This condition was exacerbated by the strip of outsole rubber on the lateral midfoot, which allows the medial midfoot of the shoe to collapse easily.  I must stress that this is not necessarily a design fault in the shoe, but rather something that does not work for me. 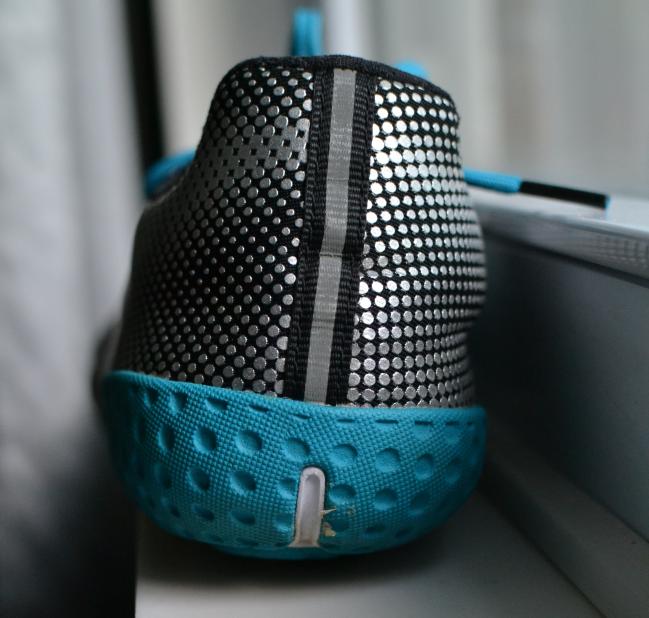 Beyond that, cushioning in the shoes was adequate for 50min+ of running on several occasions.  Considering that I’ve run longer in less, I would consider the cushioning to be just fine.  Due to the high-volume fit in the upper, I did not run in the shoes without the insoles, something that you could do should you so choose, as the footbed is seamless.

The upper of the Fit is unique in that it is 3D-printed, a single piece that will allow for great breathability while providing decent support and fewer hotspots.  In my experience, the upper was breathable *enough*, and no more.  It always felt like I was wearing something thicker.  While it was fine against the bare skin of my feet, it always felt warmer than I expected it to be.  I was pleased to find that the Fit used conventional eyelets as opposed to the Phase’s loop lacing system which, when combined with an eyelet on only one side, just never left me satisfied with the lacing—especially because I prefer lace locks for heel security.  At the very least, the upper caused me no hotspots in exclusively sockless running.

Much like the Phase, I found that the Fit is just too high-volume for my feet.  No matter how tight I tied the laces, I just never felt really secure in the shoes.  I couldn’t have sized down because I would have hit the end of the toebox (this happened with the Phase, too), and the 11.5 that I normally wore was perfectly fine in length.  I’ve found that even when I wore socks that I often was having to heavily tighten shoes because of volume issues, so this is really nothing new and, again, more a case of the shoe not working for me than a problem with the shoe itself.  I will say, however, that I am not a fan of the nubs on the insole of the Fit as opposed to the less raised nubs on the Phase.  It took one good run in the rain for one nub near the edge of the insole to rub a hole the size of a pencil eraser in the instep of my left foot (which, because of the eversion issues, moves a lot more in the shoe than my right foot).

I was a little disappointed that my pair wasn’t the original Orange/White combo I saw in some of the early promotional shots, but the Blue/Grey combo grew on me.  The shoe’s design is definitely wild[er]-looking, but not nearly so much as the Phase.  Now that I’ve had them, I’m really happy with the looks.  They never look clunky on my feet and are not so unconventional as to scare more conservative runners.

I really don’t want to give you all the wrong idea here. The Skora Fit is a well-made shoe that, for the right foot and stride, will be very comfortable and last a long time, all the while providing a zero-drop platform capable of long runs or speed work with equal gusto. Unlike the rest of Skora’s line-up, it is affordably priced at $100 MSRP.  In those respects, it’s everything I should have wanted.  However for my feet, they just didn’t work.

Despite my experience, I can still say that these are good shoes, and I recommend at least giving them a shot.

The Skora FIT is available for purchase at Skora.com.