Slow Motion Gait Analysis – You Be The PT Part II 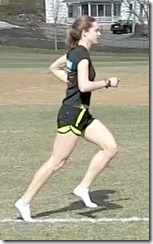 Ten days ago I posted a series of videos of my friend Lauren running on a treadmill in slow motion. As I indicated in that post, Lauren is a very strong runner, but has been dealing with intermittent, debilitating bouts of ITBS in her left leg for many years. In the comments to that post (which set a record for this blog I think – thank you all for pitching in!), several suggestions came up repeatedly. A few of these were:

1. A bit more information about Lauren’s injury history. Here is what Lauren added in the comments to that post:

I tore my ACL/MCL and medial meniscus while playing basketball in high school, not from running. I was never injured previous to this.

In college, I developed a stress fracture in my right tibia freshman year, broke my left foot in a conference 4x800m relay sophomore year and then had ITBS the last two years. Since college I’ve only had issues with ITBS in my left leg. There doesn’t seem to be a pattern to the injuries which makes it very difficult to figure out the cause.

My sophomore year of college I was fitted for custom orthotics as I was told I pronated, more significantly in my left foot than right. I’ve recently had these orthotics examined by a PT and was told they were still supporting my feet correctly and hadn’t broken down. That being said, the PT also mentioned that if I wasn’t already in an orthotic he would NOT have prescribed me them today even though I do pronate to some degree.

As for rehab, I have been working with an athletic trainer for the past year and a half on strength training and mobility work. She is a firm believer in the functional training system. I lift twice a week which always includes soft tissue work, activation and mobility exercises and core, upper and lower body strength exercises. Because this athletic trainer did notice a good deal of weakness in my hip stabilizers, glutes, hamstrings and core, I have put even more of an emphasis on strengthening these groups and increasing mobility/flexibility. I also have ART once a week.

The result from adding strength work to my training was immense and the results were remarkable. The first ten months of last year were amazing. I was running faster than I had in years – or ever in some distances – but more importantly I felt great, no sign of injuries. I thought I had put the ITBS behind me. Until one run when I suddenly got shooting pain on the lateral side of my left knee again. It comes without warning and unfortunately it means weeks and usually months off from training.

In addition to more detail on her history, there were also requests for addition film. In particular, commenters asked to see:

1. Film of Lauren running outside on her typical running surface (roads).

2. Film of her in her typical shoes (Brooks Launch) with her orthotics.

3. Film that would allow visualization of her hip movements as well as her arm swing.

Well, earlier today we were back at it, and this time we had some professional help. Dr. Brett Coapland is a chiropractor at Performance Health Spine and Sport Therapy in my hometown of Concord, NH and regularly works with local runners (he’s an accomplished triathlete and runner himself). He came highly recommended by a colleague of mine, so I mentioned him to Lauren, and she booked an appointment. After her first appointment, they decided that doing some additional filming might be worthwhile. So, I found myself this morning shooting video from the window of a moving car driven by Brett as Lauren ran alongside. It was quite fun actually, and the technique worked remarkably well. In particular, it helped her get into a running groove that is hard to accomplish by just having a person run past a stationary camera.

Here are a few of the videos we shot – in the first four Lauren is wearing the Brooks Launch with her orthotics. She indicated afterward that she was running at around a 6:30 min/mile pace. The last two videos are at slower pace in socks on a grass field.

Once again, feel free to share your thoughts. There were a couple things that really stood out to me here, but I’ll save my opinions for the time being.

Outdoor Slow Motion Running Gait – Back from Runblogger on Vimeo.