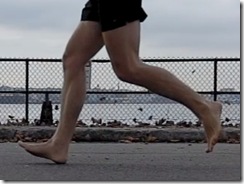 Yesterday I posted a few still shots captured from a video I took at the NYC Barefoot Run. Today I add a a few video clips showing a sample of runners from the event – mixture of barefoot and several Vibram Fivefingers runners (as well as a few other things).

Once again, it’s hard to know if these runners were forcing their stride or not, but certainly to compare the barefooters to the Vibram runners suggests again that just putting on a pair of Fivefingers is not necessarily going to cause you to stop heel striking. However, running in barefoot-style shoes may change your stride in other, perhaps more subtle ways. Furthermore, some people do in fact heel strike when barefoot – how long they continue to do so is unknown, but the individual in the photograph above was among the group on their second 2-mile loop around Governor’s Island (don’t know if he started with them or not).

I have not quantified patterns from the video yet, but it looks to me like the percentage of forefoot strikers is higher among barefooters than among wearers of Fivefingers, I’ll leave it up to you to ponder/speculate on why that might be the case.

Make the videos below full-screen for best viewing, quality is somewhat degraded from the original during file conversion and upload to YouTube. I have also cropped the originals to mask the identity of the runners.