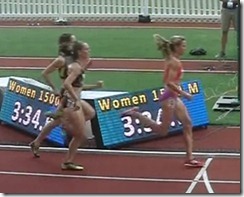 Below are an excellent series of videos shot with a high-speed video camera by PT Jeff Moreno from Precision Physical Therapy and Fitness in Santa Cruz, CA.

While you watch the videos, which Jeff originally posted on his clinic’s blog, keep an eye on the landing position of the foot relative to the knee at initial ground contact – it almost always lands right under the knee in each runner. Elites like these have long strides to attain the speeds that they do, but stride length comes via hip extension on the back side, and not via reaching with the foot out front. This is one of the biggest differences that I consistently see when comparing runners like these to recreational runners in heavily cushioned shoes (like many runners in this video).

First, here is the women’s 1500 meter final, about which Jeff says “Of all the athletes I saw run at the Olympic Trials, Morgan Uceny was an example of exceptional form and running economy.”:

You just finished reading Slow Motion Videos of Runners at the 2012 US Olympic Trials: 1500 and 5000 Meter Women’s and Men’s Races! Consider leaving a comment!