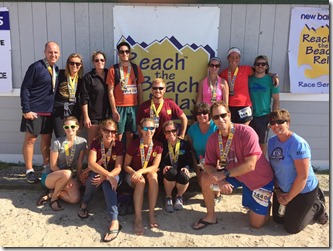 A couple of weeks ago I wrote a post about how I had no plans to race this Fall. Life has gotten incredibly busy with my return to school (though I’m having a blast!), and it seems like most of my time these days is spent either in a classroom or on a soccer field (two of my kids are playing right now…lots of chauffeur duty!). Fitting in running has been a challenge, though it remains a priority to get out there 4-5 times per week.

Anyway, my wife ran Reach the Beach last weekend with a team of teachers and parents from my kid’s school. She’s not typically a competitive runner, but she managed 17 miles during the relay, and when she got home she said a group of them were planning to run a 10 mile race in my home town in October. She was looking forward to going back to her zen-like 3-5 mile runs, but was torn since she had gained a lot of fitness and wanted to keep that going as well. I was rather shocked when she proposed that I run the 10-miler with her, and given that this would be her longest ever race, I couldn’t say no (despite my current absence of distance training…).

Five miles is pretty much my long run right now, but as the temperature has cooled with the arrival of Fall, my pace has been picking up (been using my GPS a bit lately since I’m running in a lot of unfamiliar areas). I figure I could get up to 10 miles easy enough in a month, so I’m going for it. As I anticipated she would, my wife returns from almost every run she does and claims she’s dropping out of the race, but I simply tell her she committed me to doing it and she’s not getting out of it now. Add in a bit of pressure from one of her RTB teammates and I’m hopeful we’ll both be at the starting line.

My secret goal in all of this is to get her hooked enough to run the Disney Princess Half Marathon with me sometime. We’re usually in Disney the week of that race every year, and I’ve long wanted to participate (my Y chromosome precludes me from doing it by myself). I’m not holding my breath – winter is coming – but a guy can dream right???

You just finished reading So That Bit About Me Not Racing This Fall…I Blame My Wife! Consider leaving a comment!