Step Outside Your Comfort Zone: Yoga, Running and Life 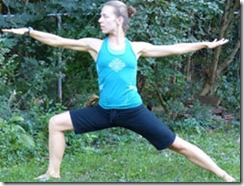 I never thought I’d say this, but I went to a yoga class today. A real yoga class, with mats and music and mantra chanting and sweat and everything you’d imagine would come along with doing yoga in a studio.

You see, my wife Erin is a yoga instructor and has been a yogini for about as long as I have been a serious runner. She also runs, but until today I’d never gone to a yoga class with her. To be honest, though she used me as a guinea pig to trial run some of her class plans, I really had no idea what exactly it was that she did when she left the house to go to a class. It was always kind of a black box to me – she’d leave the house, I’d watch the kids, and she’d return a few hours later a bit calmer and a lot sweatier than when she left.

Quite a long time ago we made a little deal. She’s an excellent writer, and I’d long encouraged her to start her own blog. She has a lot of knowledge to share on a range of topics, but she’s also much more private than I and had resisted my encouragement. She’s not as comfortable putting herself out there as I am. However, she told me that she’d do it if I went to a yoga class with her. Seemed simple enough – she started writing (her blog is here, though she writes far less often than I and mostly for herself), but a year went by and I still had not lived up to my end of the bargain.

Why is it that I couldn’t bring myself to go to a class with her? A big reason was  scheduling – when she goes to yoga I watch the kids, and we’ve never made the effort to get a babysitter to allow us to go together. The other big reason is quite honestly me – I envision yoga as a very spiritual practice, and I’m not generally the spiritual type. What’s more, the thought of contorting my inflexible body into the various positions that Erin can demonstrate with ease was rather intimidating to say the least (especially in front of other seasoned practitioners!). I’ll admit that I was embarrassed to even try.

Well, my parents were in town this weekend for my son’s birthday party, and somehow in a moment of weakness I left the door open to the possibility that I might go to the Sunday morning class with her. This is her favorite class of the week because it is taught by the studio owner, they do chanting beforehand, and the class is always well attended. I passed on the chanting session (baby steps…), and met her at the studio just before the class started. She brought me into the practice room – a soothing, bright space with bamboo floorboards and light green walls – and we set up our mats. Right dead center in front of the teacher. In front of nearly 30 other practitioners – the room was filled to capacity with people who looked like they really knew what they were doing. I was intimidated to say the least!

Fortunately Erin is very good at what she does, and I was able to keep an eye on her as we progressed through the class – I managed to not get too lost. The fact that she has taught me a bit at home helped, and being a Taekwondo practitioner myself helped with some of the balance and pose holding. But, I am not flexible, and that became very clear. I survived, I got a good workout, and I actually quite enjoyed it.

Erin told me beforehand that yoga practitioners are very open and accepting, and that there was no need for me to be intimidated or embarrassed. She said people look inward in class and don’t generally pay attention to what others are doing. She was right – I felt very comfortable, and I’d do it again without fear.

I know that for some people starting to run is as intimidating (if not moreso) as it was for me to go to the yoga class today. Embarrassment, the thought that others might point fingers or laugh, the belief that it’s just too hard – these are the irrational thoughts that keep many people from ever lacing up their shoes (or unrolling their yoga mats). As with so many things, it’s that first step that is the hardest. When I started running 5 years ago I was horribly out of shape – 190 pounds and barely able to run a few miles. I remember feeling really uncomfortable and out of place when I ran my first race. But when I consider where that first running step has taken me over the past 5+ years, it reminds me of the importance of stepping outside your comfort zone. You can’t accomplish much if you don’t try, and that’s a lesson I’ve learned over and over.

Nowadays when I see an obviously new runner, perhaps someone who is really out of shape, I don’t laugh, and I don’t point fingers. Far from it. Instead, my thoughts are of silent encouragement. A mental high-five if you will. Nothing makes me happier than someone striving to change their health, and life, for the better. I guarantee that most other runners feel the same way – we are an incredibly supportive community.

I don’t know where today’s first step will take me, but I thank Erin for giving me the push, and I encourage you to do the same. Take the first step, try something new, or motivate someone else to do the same. You never known when something that at first seems intimidating can quite literally change your life.