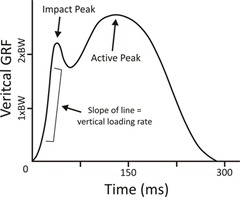 A new study was just published in the European Journal of Applied Physiology that showed that adopting a midfoot strike is an effective way to reduce the impact loading rate during running. The study was conducted by a group from France and Canada (including my friend Blaise Dubois) and is titled “Impact reduction during running: efficiency of simple acute interventions in recreational runners.”

Impact loading rate is essentially the speed at which ground impact is applied to the foot and leg at initial ground contact in running (for more in-depth discussion of this, read my “Facts on Foot Strike” article in Running Times), and it is of interest because previous research has suggested that high loading rates may increase the risk of stress fractures. What is interesting about this study is that they looked at the comparative effectiveness of several methods for reducing impact loading rate: 1) adopting a midfoot strike, 2) increasing stride rate by 10%, and 3) wearing racing flat shoes.

The authors took nine habitually heel striking runners and had them run trials on an instrumented treadmill in both typical running shoes at their normal cadence with their normal footstrike, and then compared impact results to those obtained under each of the three conditions mentioned above, or when all three were combined at the same time.

Results indicated that adopting a midfoot strike or a combination of all three experimental modifications together resulted in complete absence of an impact peak and a significantly reduced impact loading rate (by approximately 50%). Increasing cadence by 10% or switching to racing flats in isolation did not significantly alter impact variables. They also found that pre-contact muscular activity in the gastrocnemius (calf) was higher, and activity in the tibialis anterior was lower in the midfoot strike and combined treatments.

Based on these results, the authors conclude the following:

“Our results show that the most efficient solution for acutely reducing LR is to run with a MFS pattern ….The reduced LR observed in habitual forefoot strikers or resulting from a shift from a rearfoot strike to the MFS pattern in habitual rearfoot strikers as observed in the present study may be associated with a lower risk of running-related injuries, and especially tibial stress fractures (Daoud et al. 2012). However, it may also cause collateral noxious effects such as metatarsal stress injuries, shin splints, and muscular and tendon injuries if not carefully and progressively conducted (Lohman et al. 2011). Further studies should determine whether the transition towards a consistent MFS pattern in the long-term is possible and not associated with other risks of injuries such as Achilles tendinopathy.”

A couple of points warrant mention about the results. First, the authors point out that the racing flat they used for all subjects was lighter and less structured than the training shoe employed for the “normal” condition, but it actually had a 2mm greater heel-forefoot drop than the training shoe. As such, it was not “flatter” and thus may not be representative of how a racing flat with a lower ramp angle might affect the variables under consideration. Second, even though increasing cadence did not significantly reduce loading rate in this study, previous research has shown that increased cadence can reduce loading of the knee and hip joints. It’s important to keep in mind that loading rate is just one variable to consider when it comes to injuries, and it has been most closely linked to stress fracture risk. Thus, different injury types may respond best to different types of intervention.

I am left with a few questions, and I hope that I can get Blaise Dubois to drop by and answer them in the comments.

1) I’m curious, as I always am, how much inter-individual variation there was in response the the various treatments. In other words, did some people experienced markedly reduced loading rate via an increased cadence or a change in shoes?

2) Unlike this study, Chumanov et al. found significant changes in muscle activity when runners increased cadence by 10%. I’m wondering if the lack of change in the study discussed here might be related to the smaller sample size (9 vs. 45 runners).

The take home message would be that if you have a history of stress fractures, foot-strike modification might be one method to try, but any change must be gradual as altering foot strike can stress other tissues in new ways that they are not used to (e.g., foot, Achilles tendon.)