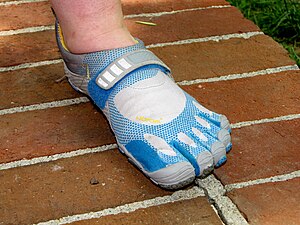 The question of how footwear (or lack thereof) affects running economy has received a great deal of attention over the past year or so. Several studies have come out that have compared oxygen consumption in runners in both shod and unshod states, and most recently Franz et al. published a study showing that among habitual barefoot runners there is no significant difference in economy when “barefoot” (wearing only socks) vs. running in a lightweight racing flat (see my commentary on the Franz study here). The Franz study concluded that any economy gains due to weight savings when running in a simulated barefoot condition seem to be balanced by economy losses due to the lack of cushioning, which results in a non-significant difference between the “barefoot” and shod conditions.

However, until now, studies have not looked at how economy changes as a result of a period of barefoot or minimally shod training. A study, titled “Four-week habituation to simulated barefoot running improves running economy when compared with shod running,” was just published on-line in the Scandinavian Journal of Medicine & Science in Sports. In the study, authors J.P. Warne and G.D. Warrington of Dublin City University in Ireland investigate how 4 weeks of training in Vibram Fivefingers affects running economy and a variety of other physiological and biomechanical variables.

The study authors recruited 15 experienced collegiate runners who each ran a minimum of 6-7 days per week (minimum 50km per week of training). None of the runners were experienced or habitual barefoot runners. Each runner was given a pair of Vibram Fivefingers (VFF; weight = ~150g) and a neutral training shoe (weight = ~450g). During the pre-test, running economy was determined for each footwear condition by measuring oxygen consumption while running at both 11km/h and 13km/h on a treadmill. The researchers also measured heart rate, rated perceived exertion (RPE), stride rate, and foot strike type.

After the pre-test, the runners were assigned a 4-week transition program to acclimate them to running in the Vibram Fivefingers (the simulated barefoot condition). They maintained their typical weekly training volume in their typical shoes, but gradually added (or substituted) in mileage each week in the VFFs (two 15 minute runs the first week, up to 3-4×30 minute runs in week four). At the end of the four week period they ran a post test that was identical to the pre-test conducted at the outset.

Pre-test results showed no difference in running economy between the training shoes and VFFs at either speed. Previous research has typically found that a 100g reduction in shoe weight leads to about a 1% increase in running economy. Given that the VFFs weighed ~250g less than the training shoes, it appears once again that any economy benefit of the reduced shoe weight seemed to be balanced by losses resulting from other properties of the barefoot-simulating footwear. These losses could be due to a lack of cushion, or in this study possibly a lack of familiarity with how to run efficiently in a barefoot-simulating shoe at the outset. The only difference that was found between the footwear conditions for the pre-test was that runners had a higher stride rate (and thus a shorter stride length) in the VFFs (83.69 strides/min in VFFs vs. 81.54 strides/min in training shoes).

What happened next was interesting. After the 4-week acclimation period, running economy in the Vibram Fivefingers increased dramatically (~8%), RPE decreased by 9.45%, and foot strike shifted more toward the forefoot. To a certain extent this is to be expected – as they acclimated to the novel footwear condition, the runners got more comfortable and more efficient at running in the barefoot-style shoes. However, more surprising is that in the post-test comparison the runners were now about 7% more economical in the VFFs than they were in the training shoes (the difference was statistically significant). They also tended to land more often on the forefoot in VFFs, and continued to run with a higher stride frequency in the VFFs compared to the training shoes. Economy in the training shoes improved by 2.32% after the 4-week period, but the improvement was not significant and the authors point out that this could simply be a normal training effect (i.e., 4 weeks of additional training would be expected to have some physiological benefit).

So the big question here is why the runners were so much more economical in the Vibram Fivefingers when compared to the cushioned training shoes after using them for 4 weeks in training? The magnitude of the difference exceeds what would be expected from the weight difference alone (even when combined with any physiological benefit from 4 additional weeks of training), and the authors discuss some possible explanations. They speculate that the combination of increased stride frequency and landing more toward the forefoot may have resulted in a more effective recovery of elastic energy in the muscles and tendons of the feet and legs. They suggest that increased feedback from the ground surface when wearing a barefoot-simulating shoe might, through a period of motor learning, lead to “increased coordination and pre-activation of the dominant running muscles in anticipation of ground contact.” The resulting form changes (e.g., increased stride frequency, limb stiffness adaptation through changes in joint angles, and foot strike modification) could then explain the benefits to running economy in the barefoot-style shoes.

As I read this study I kept wondering to myself why they found such a large difference in economy between the VFF and training shoe conditions when Franz et al. found no significant difference in economy between “barefoot” (socks) running and running in a light racing flat (Nike Mayfly). There are a couple of differences between the two studies that are worth considering. First, Franz et al. recruited experienced barefoot runners and screened their subjects to only include those who landed midfoot/forefoot. They were specifically interested in the effects of shoe weight, so they tried very hard to control for form/biomechanics. In the Warne and Warrington study subjects were not experienced at barefoot running, and biomechanical differences were observed when they ran in the VFFs vs. training shoes both before and after the 4-week habituation. As such, form changes (e.g., shorter stride, foot strike change) resulting from a period of simulated barefoot training could explain at least part of the improvement in economy in the VFFs, and these may not have yet translated across to the training shoes (more time needed perhaps, or just not likely to happen in a 12oz training shoe?).

Another thing to consider is the type of footwear used for the “shod” condition in the two studies. Franz et al. used a light racing flat (Nike Mayfly), whereas Warne and Warrington used a heavy trainer (400g). It’s possible that some property of the shoes used influenced the results – for example, there may be a point of diminishing returns when it comes to shoe cushioning. As is pointed out in this article in the NY Times (discussing another study from Rodger Kram’s research group), there may be a cost to too much cushioning. As a personal aside, I find it very, very hard to run the same way in Vibram Fivefingers and a 12mm drop, 10oz+ training shoe, and I don’t know that form changes will ever perfectly translate from one to the other due to structural differences between the shoes (I don’t know if it’s wise to even try forefoot striking in a 12mm drop shoe).

One other related study is worth mentioning. In 2009, Squadrone and Gallozzi published results on habitual barefoot runners in which they found them to be about ~3% more economical in VFFs compared to traditional training shoes, which could be explained in part by a weight effect (though economy when barefoot was the same as in VFFs). However, even among these habitual barefooters there were biomechanical differences between the shoe conditions (e.g., joint angles at contact differed, foot strike was more posterior, contact time was higher, and peak impact force was higher in the traditional shoes vs. VFFs). All of this points to the complex effects that footwear can have on running gait. Shoe properties matter, experience of subjects matters, as do probably a variety of other factors.

Will this study end the debate about whether barefoot running is better or worse, or just different? No, not likely. But, it does provide some additional evidence that including some amount of barefoot or minimally shod running in your training routine can help you develop a more efficient running form (and things like barefoot strides have long been used as a training tool by high level runners for this very reason). However, it’s worth noting that benefits accrued from “barefoot” training may not translate directly to running in a traditional training shoe, particularly if your form reverts when running in that shoe. What needs to be done now is to figure out which factors specifically explain benefits gained as a result of barefoot/minimal training, and figure out how best to get those to translate to running in other shoes.  A longer term study might help accomplish this, and a study incorporating more explicit form training and cueing might help as well.

I always like to end posts like this with a call for anecdotal experiences – some hate anecdotes, but I find them interesting and informative. Have you sensed an improvement in your economy or perceived exertion after migrating to a more minimal or barefoot-style shoe? Share your thoughts in the comments!