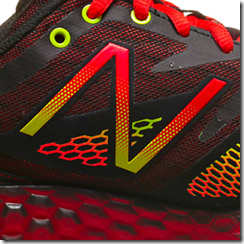 This is Part 3 of a 4-part series – you can also view previews of Altra, Newton, and Hoka summer 2014 releases. Since these shoes have yet to be released, I have not run in any of them. If you have, I’d love to hear your thoughts in the comments!

I’ve had mixed luck with New Balance shoes lately. I loved the 1400v2, but was underwhelmed by the 890 v4. I bought the MT00v2 and wound up returning them because they felt a bit to snug/pointy at the front of the toebox, and the Fresh Foam 980 has a lot of potential but is also problematic for me due to being too pointy up front (full review coming soon). Thus I’m a bit wary of both of the shoes below due to potential fit issues.

The Fresh Foam 980 road shoe is an interesting one as it combines a softish heel with a firm, responsive forefoot in a 4mm drop platform. It’s not nearly as soft or cushy as the marketing for the shoe would have you think, and the stack height is more in line with a shoe like the Saucony Kinvara than a maximal shoe like a Hoka. But the fit is a problem for me – the last is too pointy and mashes my big toe inward to the point where I get blisters (I even sized up to try to avoid this, but no luck).

I’d be interested in trying the Fresh Foam 980 Trail, but it’s definitely one that I will have to try on before purchasing. I won’t buy another shoe on the Fresh Foam platform if the fit is similar to the road shoe. The toebox in the 980 trail does look a bit more rounded in the photo above, so I may give them a try if my LRS decides to stock them. In the meantime, my buddy Sam Winebaum wrote up some thoughts on the 980 Trail after a few runs in a pre-release sample.

The original New Balance MT110 was a favorite among Runblogger readers (it ranked 2nd in my 2013 reader trail shoe survey). The roomy toebox and low-profile but protective platform seemed to be big pluses, though on the minus side the upper seemed prone to tearing. Rather than simply address the upper issue, it was a bit of a surprise when New Balance decided to instead overhaul the shoe into something quite different.

In the MT110v2 New Balance has ditched the roomy Minimus last for a snugger fit, and they have moved the shoe onto a more aggressively lugged platform. I haven’t seen the shoe myself, but Nate has a pair and has run in them a few times. His informal review to me is that the new sole is awesome, but the new last is a big problem for him and may be a deal breaker. He should have a review up on Biker Nate soon. The only detailed review I have seen so far of the MT110v2 was posted by Jeremy over at Purposeless Play.

Next Post: Part 4 – Hoka Summer 2014 Releases (or jump to Altra or Newton previews)