Home / Blog Posts / The 100 Best Running Shoes of All Time, and My Personal Top Three

The 100 Best Running Shoes of All Time, and My Personal Top Three

My buddy Thomas at Believe in the Run posted a Tweet yesterday that linked to a post on Sneakerreport.com. The article provides their list of the 100 Best Running Sneakers of all time, and it’s one of those lists that is sure to stir up some strong feelings and fond memories. Though I can’t say I agree with the number of current year models included in the top ten, and I might debate their choice at position #1 (has to be an Onitsuka or early 1970’s NIke!), it was fun to scan through the images of shoes from the past 40-50 years. I give them credit for finding all of the photos that they included! 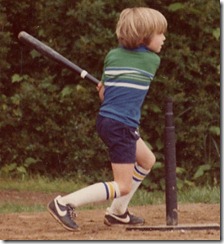 This list go me to thinking about my own running shoe history. Other than my bright orange Andre Agassi tennis shoes from high school (awesomeness!), I can’t honestly say that I remember any particular shoe prior to when I started running seriously in 2007. My brother sent me a picture of myself from 1980-81 (see left) wearing what looks like a Nike Cortez (and some sweet tube socks!), but my memorable shoes are all very recent.

In the spirit of the list, I thought I’d provide my personal top three shoes among those that I have worn over the past 5+ years. This isn’t so much a “best” shoe list as it is a list of those shoes that have been most meaningful to my development as a runner. They either set me off on a new path in my running, or carried me along as I accomplished some running goal. They all have their flaws with respect to my current preferences (the Saucony A5 is as near perfection as any to me now), but at the time that I wore them, they were perfection.

Here they are in no particular order: 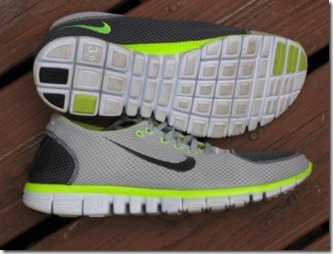 The original incarnation of the Nike Free 3.0 was a masterpiece. It was the shoe that led me away from heavy stability trainers and into the world of lightweight flexibility (you can read my dusty old review from May 2009 here). It wasn’t wide by any means, but to this day I’d say it has one of the best uppers I’ve ever worn, and the silence of the sole against the ground was magnificent. Unfortunately, the Free line is trending more and more towards fashion over function these days, and I put the 4th incarnation of the Free 3.0 up on Ebay after only one run. This is one shoe that will remain in my closet forever. 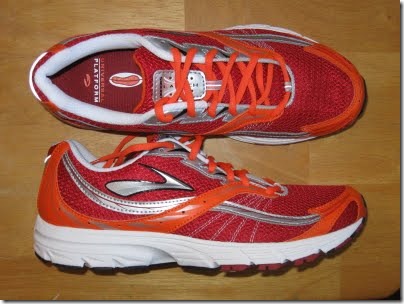 Ahh, the Launch. This was easily the best of the more traditionally styled shoes that I’ve owned (my review from November 2009 here). The Launch was a no frills shoe built for hard training that could step in for speedwork as well. The sole was on the soft side, and the heel-toe transition was fantastic (yes, I wore this long before I’d ever thought too much about my own running form). Given the higher offset, my days in the Launch have passed, but for a period it was the best shoe in my stable, and carried me to an unexpected PR at the Disney (Ice) Marathon. I was sad to hear not to long ago that the Launch was to be discontinued (and the fact that there never was a Launch 2 supports this), but there have been recent rumblings that it may have been spared – I hope so, as it’s a great shoe for its niche.

Anyone who has read Runblogger for any length of time knew that the Kinvara would be on my list (my Kinvara review here, which may be the longest review I have ever written). Though some might quibble that the Kinvara 3 was placed at #2 on Sneakerreport’s all-time list, when the dust has settled a few decades from now I’d say that there’s a fair chance that the Kinvara is among the top ten most memorable shoes. Saucony took a risk with the Kinvara by putting a lower offset shoe out there before most of the other big shoe companies, and it paid off big for them. The Kinvara is now in its third iteration and is among their best-selling shoes, and it has helped to push the lightweight trend that is now permeating the running shoe market. Personally, the original Kinvara is a shoe that disappears on my feet. Lightweight and low offset, it gives me almost everything that I need in a running shoe. What’s more, it carried me through my Boston-qualifying marathon, as well as through the Boston Marathon itself. You never forget a shoe that allows you those experiences, and the Kinvaras have earned their place in my running shoe Hall-of-Fame!

How about you, what are your personal top three shoes of all time?

You just finished reading The 100 Best Running Shoes of All Time, and My Personal Top Three! Consider leaving a comment!