The 2009 Badwater Ultramarathon (with video) 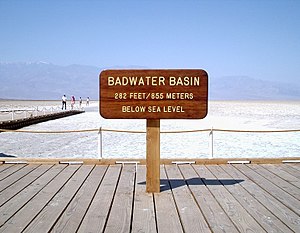 The 32nd Badwater Ultramarathon, presented by AdventureCORPS Inc., was run from July 13-15 2009. Although I have never run an ultramarathon, I find this race to be particularly compelling for a number of reasons. For one, the race is insanely difficult. Touted as “the world’s toughest foot race,” the course is described as follows on the official Badwater race website:

“Covering 135 miles (217km) non-stop from Death Valley to Mt. Whitney, CA in temperatures up to 130F (55c), it is the most demanding and extreme running race offered anywhere on the planet.

The start line is at Badwater, Death Valley, which marks the lowest elevation in North America at 280′ (85m) below sea level. The race finishes at Mt. Whitney Portal at 8360′ (2533m). The Badwater course covers three mountain ranges for a total of 13,000′ (3962m) of cumulative vertical ascent and 4,700′ (1433m) of cumulative descent. Whitney Portal is the trailhead to the Mt. Whitney summit, the highest point in the contiguous United States.“

As a point of emphasis, the race begins in Death Valley – in mid-July! Having visited Death Valley in August, I can attest to the fact that it’s blazing hot there in the summer, and the 120F temperature the day we were there caused my wife and I to forgo our camping plans and spring for an air-conditioned room. It was one of only a handful of hotel rooms we stayed in during a 6-week cross-country trip (we were unemployed, newly minted college graduates at the time).

Another reason I find this race fascinating is that shortly after I became a dedicated distance runner, I watched the documentary “Running on the Sun,” which recounts the running of the 1999 Badwater Ultramarathon. Running on the Sun documents the training required to successfully run the race (e.g., treadmills set up in saunas), and presents a no-holds-barred account of what the runners have to contend with during the race itself. The documentary is graphic at times (there are some nasty looking feet, as well as various other health problems), and it gives great insight into the mind of those brave (or crazy?) enough to challenge a race like this. The DVD seems to be hard to come by, but it is available for rental through Netflix. A second documentary about the Badwater Ultramarathon, The Distance of Truth, was released recently, but I haven’t seen it yet.

Back to this year’s race. The 2009 Badwater was won by Marcos Farinazzo of Rio de Janeiro, Brazil in a time of 23:39:18. The top female finisher was Jamie Donaldson of Littleton, Colorado, in a time of 27:20:18 (5th place overall). For complete 2009 results click here. For more general information on the race, you can download the 2009 Badwater Ultramarathon Race Magazine.

Iit amazes me that there are humans capable of running such a distance in the summer heat, and it is a testament to the adaptability of the human body and the dedication and hard work of these runners that it can be done. In my opinion, anyone who finishes this race (or any other ultramarathon for that matter) deserves special recognition. Below is a video recapping the 2009 Badwater – enjoy!

You just finished reading The 2009 Badwater Ultramarathon (with video)! Consider leaving a comment!