Home / Blog Posts / The 5K Bites Me Back: Humbled By Heat And Hills

The 5K Bites Me Back: Humbled By Heat And Hills

About a month ago I ran a 5K in which I finished just two seconds short of my PR. To say that I was happy would be an understatement. It was only my second 5K of the year, and it gave me hope that a new PR would soon follow.

I had set my eyes on the Concord Rock ‘n Race 5K as my next attempt. The Rock ‘n Race is one of the biggest running events of the year in New Hampshire – for a night the streets of my home town are taken over by a crowd of around 3,000 runners and at least as many walkers. There are bands and food on the course. For a town with a population of just over 40,000, it’s quite an impressive event.

I’ve run the Rock ‘n Race several times before (it’s been several years since my last attempt), and I knew that the course was going to be tougher than the one I ran my previous race on. I’d forgotten just how tough it is. The course starts fast, but from mile 1.5 to about mile 2.6 there is a slow but steady climb, with a couple of short, sharp inclines. The final half mile includes a big downhill leading into a flat, fast finish.

Here’s the elevation profile from Garmin Connect as recorded by my Garmin 620:

But at 5K race pace it feels more like this one with the condensed Y-axis (graph below was output via the ConnectStats app): 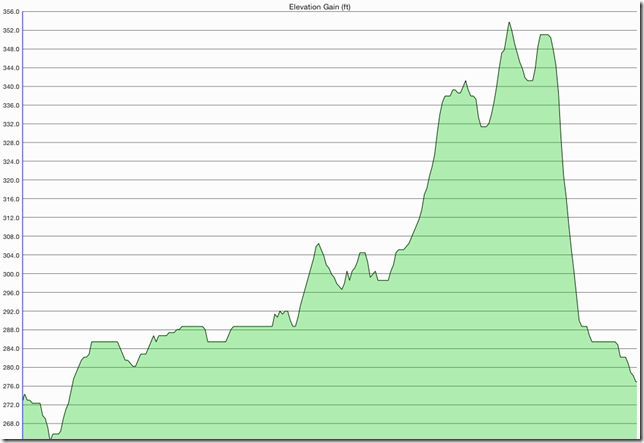 I’ll cut to the chase and say that I didn’t PR at the Rock ‘n Race. Not even close. In fact, I finished almost a full minute slower than the 5K I ran in mid-April.

I kind of had a sense that it was going to be a struggle before the race even started. My legs felt dead during my warmup – I thought maybe they were still recovering from a long, dehydrating run earlier in the week. It was a pretty warm night, and by about a mile into the race it felt like my mouth had been stuffed with cotton – for some reason I was dying for some water, which almost never happens to me in a 5K. The hills sapped me, and I simply didn’t have the toughness to maintain pace on the inclines. I gave in to my screaming legs and let myself slow down. I told myself that I’d be content (not happy, but content) with a sub-20. I beat that by only 10 seconds with a finish time of 19:50, and it was a struggle to get there with a near all-out effort in the final tenth of a mile. When I crossed the finish line I wasn’t particularly pleased with the result.

My spirits lifted as I ran the course backwards to meet up with my family. I passed hundreds of runners heading toward the finish line. I saw friends. I saw and cheered on 4 or 5 runners from my beginner 5K group who were on their way to finishing their first ever 5K (they were doing the race in lieu of our usual Thursday workout). I saw people from last year’s 5K group who are now regular runners (which is awesome!). And then I spotted my wife pushing my 4 year old son in a stroller and my 8 year old daughter running alongside her (my older son had apparently taken off ahead with a friend). We ran-walked the final mile together and had a blast. It kind of put things into perspective a bit, and I got a little pissed off at myself for being upset about my own race. It felt selfish to be worried about my own time on a night in which my home town celebrates the sport that I love. But I can’t deny that finishing a minute slower than my previous race still stung a bit.

Sometimes a day of reflection adds a bit of clarity. We didn’t stick around to see the award ceremony because the crowds were huge and we had the kids in tow. It wasn’t until around midnight on race night that I checked the official race results and found out that I actually finished second in the 30-39 age group, and 34th overall out of nearly 3000 runners. Though it wasn’t my best time in this race (I ran it in 19:17 back in 2010), it was my highest age group finish. And I saw that several of the people who had run that race back in April were also around a minute slower last night (including a local speedster who had finished second in both races). I now feel a bit guilty for hashing through in my mind all the things that went wrong with my race. I need to remind myself that courses and conditions vary, and that it was warm and hilly on Thursday whereas the race in April was cool and flat. The heat and hills most definitely got the better of me, time to move on.

You just finished reading The 5K Bites Me Back: Humbled By Heat And Hills! Consider leaving a comment!