The Benefits of Stepping Away From Running For a Bit 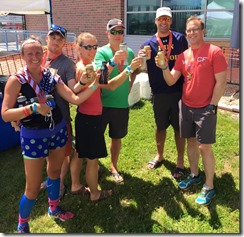 This morning I ran five miles at a pace of just over 8:00 per mile, then finished with a mile or so of hill repeats. A few years ago this would have been a pretty standard type of workout for me, but on this day it was a big step forward to feeling like a runner again.

My life for the past 12 months or so has been almost completely consumed by my first year as a high school biology teacher (with the remainder of my time mostly allotted to being a soccer dad). Though I love my new job, I’ve never worked so hard in my life (thank a teacher, please, it’s an incredibly demanding, yet incredibly rewarding job!), and all secondary pursuits necessarily took a back seat. Among those activities that took a hit was my running.

Since last summer, there have been many weeks were my mileage total was a big, fat zero. At first it was hard to come to terms with the fact that I wasn’t running much, but eventually I realized that I just needed to let go. I’d been a first year teacher before (at the college level), and I knew that things would get easier in subsequent years. The hiatus from my hobbies would be temporary, but necessary.

My approach could be summarized by the following:

1. Stop stressing about not running.

2. Run when I had the time, but always prioritize family time, grading, and prepping for school. Keep work stress manageable (top priority!), and use running as a release when possible.

4. Take advantage of vacations and snow days – I ran a lot over school vacations, and snowshoeing on snow days (we had 5 this year…) was an opportunistic alternative to running.

What I discovered was that the break was a net positive. Sure I gained some weight (there will be no sub-20 5k’s for me for awhile…), but my fitness took less of a hit than I expected. For example, I celebrated the end of the school year by running over 20 miles in 36 hours at the Rock Lobster Relay in Maine (great relay, and some beautiful scenery on Mt. Desert Island!). My training for this was minimal – I hadn’t run 20 miles in a week since the previous summer – but my residual fitness, maintained in some form by the smattering of runs completed during the school year, was enough to get me through without any trouble. In fact, I managed to keep my total average pace under 9:00/mile, which I did not expect. The human body is pretty amazing, and the benefits gained from running are long-lasting.

Now, half-way through the summer, I feel like I’m clawing my fitness back. I ran 25 miles last week, and hopefully will get in a 30 mile week before school starts back up. I plan to run a half marathon this Fall, and get back to reviewing some shoes (on a smaller scale than in the past). I’ve come to realize that the extended hiatus has reignited my passion, and allowed me to develop a new relationship with the sport that I love. I’m excited to get back at it!

You just finished reading The Benefits of Stepping Away From Running For a Bit! Consider leaving a comment!