On Monday morning I will be standing in a corral in Hopkinton, MA awaiting the start of the Boston Marathon. It’s difficult for me to put into words exactly how this thought makes me feel. The prospect of spending the weekend in the midst of one of the greatest running events in the world fills me with excitement – the thought of the expo alone has the gear junkie in me drooling all over (I suspect my wallet is going to suffer a bit…). However, the fact that I will be running in this race hits me on a very personal level, and it makes me a bit emotional just to think about it.

Running Boston has been a long term goal for me. In fact, the Boston Marathon was largely the reason why I became a fanatical runner just four short years ago. You see, every year students from my college train for and run the race – it’s something of a tradition. I used to get requests annually from students to be excused from class on Marathon Monday, and I always allowed it, not really understanding why these kids were crazy enough to want to run such an insanely long race. I never really considered the possibility of doing it myself until Spring 2007, and my inspiration was watching several students I knew well successfully complete the race. Maybe I could do this, I thought. Maybe… 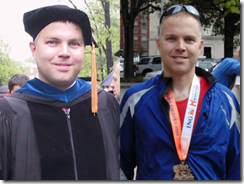 There was one problem – I was horrifically out of shape (see comparison photo at right – May 2007 vs. Oct. 2009). Pushing 190 pounds, I had reached the highest weight of my life. Having been reasonably active in one way or another throughout my past, I was disgusted with how far I had let myself go. Running had always been my go-to method for burning off excess pounds, and this time was no different. Only this time I had a goal – I wanted to run the Boston Marathon, and I made a pact with myself that I would only do it if I officially qualified.

At the time, I had no idea if I even had the ability run farther than 3 miles – I’d never done so before. I’d never even run a race before. Even finishing a marathon was an uncertainty, let alone running one at a pace fast enough to earn me a BQ. But I stuck with the running, and found a bit of ability that I didn’t know existed. Turns out there was a runner inside of that 190 pound body, and that runner could plug along at a solid clip for mile after mile. As the pounds melted away, my times improved, and the notion that Boston might actually be a reality began to solidify. I ran 5 marathons, and saw steady improvement with each. I could do this – I knew it wouldn’t be easy, but the goal was within reach. 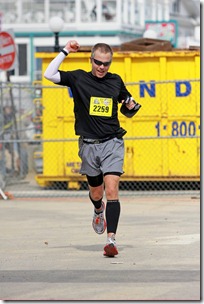 Last Fall at the Smuttynose Marathon – marathon #6 for me – I pushed my body to the limit, and I crossed the finish line in 3:15:21 – I had earned my BQ (see photo at left – the moment I realized I had done it). The pride I felt at the accomplishment wasn’t about speed or ability, it was about perseverance. I had set a lofty goal – one that I was uncertain I would ever accomplish – and by pushing myself to limits I never imagined possible, I had achieved it.

With the new qualification standards put in place by the BAA, it’s quite possible that this will be my one and only trip to Boston for the foreseeable future. My chances of registering with my current time are slim at best for next year, and once the times drop down for 2013, it’s going to be even harder. Given this, I plan to enjoy every moment of this weekend. I’m looking forward to the expo, to meeting friends at various meetups, and maybe even to doing some filming at the 5K and mile runs on Sunday morning. Most of all, however, I’m looking forward to standing in that starting corral, knowing that I earned my place there. I’m going to relish every step I take for the 3-4 hours I spend traversing the 26.2 miles from Hopkinton to Boston, and I may shed a tear or two along the way. I’m going to cross the finish line into a running future that has no immediate goals, because I will have accomplished the loftiest that I had set for myself: the 190 pound couch potato will have completed the Boston Marathon.

For anyone interested in checking out how I do (on bare bones training!), my bib# is 6615.

Lastly, since I know I’ll be asked, I plan to wear the Saucony Kinvara – it’s the shoe that got me here, so an easy choice.