Home / Blog Posts / The Brooks Launch Has Been Spared!

The Brooks Launch Has Been Spared! 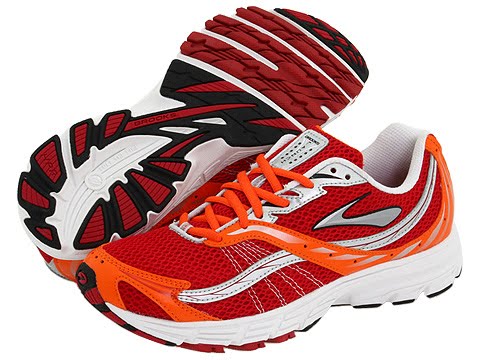 I just received a Twitter message from my friend Brad alerting me to a new post on the Brooks Running Blog. The post breaks the news that Brooks have decided to spare the Launch!

If you aren’t aware of the recent chain of events with regard to the Launch, Brooks decided earlier this year that they were going to discontinue the popular lightweight training shoe. This apparently was not a marketing stunt as I had heard the news from multiple sources, including a running specialty store owner and a runner who had direct conversations with Brooks customer service (see also this thread in the Runner’s World forum).

Why make a big deal out of this? Well, the Launch is an old favorite of mine even though I no longer run in it, and I liked it because it was simple, relatively inexpensive, and highly functional. It was a shoe stripped of “technology,” and it was popular among dedicated runners (the latter may have been its downfall, not enough purchases by non-runners). I’m not the only one who felt this way – read the following from Rogue Running specialty store owner John Schrup in his typical candid style (his Launch obituary is fantastic!):

“There is nothing on the shoe wall that even comes close to the smoothness of the Launch.  Nothing.  I mean, no techy #$%#, just butter smooth EVA and rubber…you can do anything in that shoe.  I’m trying to think of a design that is better balanced, more functional.  But I can’t.  It works for almost everyone who puts it on.  It’s brilliant, really.  The guy who designed that is a real talent, that guy.  I mean, after all, one mark of a good design is to make something so impressive out of so few materials.  Just brilliant.

There was a time when we joked that we could open up a store selling just the Launch.  We understood the brilliant, simple design, the functionality, the breadth of appeal.  It is arguably the best shoe in decades.  Oh, man we love that #$@#.  (Full disclosure:  It is a bit soft for my taste, and the differential is a bit much, but I appreciate the smooth transition and know what works for others. )  I mean, the Launch is one person’s daily trainer, one person’s marathon racer, and then everything between.  I’ve used the word “brilliant” too much already, but it isn’t hyperbole.   It is simple in design, simply brilliant.”

Here’s another homage to the Launch from Becki at The Middle Miles:

“It’s no secret that the Brooks Launch is my favorite trainer. It’s a super simple shoe, no nonsense, no bells and whistles…nothing but function. My friend Andrew recommended it to me a while ago, and while at first, I resisted and bought the Ghost instead because another one of my friends told me it was too soft (and granted, it is pretty soft), I eventually listened to him and realized how right he was. The Launch is a trainer done right. It filled the gap for me when Nike changed the midsole of my beloved Pegasus from Phylon to Cushlon, and may have even eclipsed the Pegs as a shoe that just “works.” And man, will I miss it when it’s gone.”

My feelings about the Launch were similar – simple, incredibly smooth, and an all-around great lightweight trainer.

Well, runners have spoken and Brooks has listened. Here’s what they wrote on their blog:

Runners are passionate people. So Brooks is especially careful when changing any of our products or discontinuing a specific shoe model or piece of apparel. When we announced earlier this year that Brooks was discontinuing the Launch, we expected some feedback from runners.

What we received were hundreds of letters, emails, Facebook page wall posts and tweets from fans of the beloved neutral shoe. Well, you tweeted #SavetheLaunch, blogged about your love of the shoe, and we listened. After receiving your requests, Brooks has decided to cancel plans to stop producing the Launch.

I was a bit surprised to see my face on a 2-year-old Tweet in the post (kudos to Brooks for digging that up!), but if I played even a small role in resurrecting the Launch, I’ll consider it a public service to the running community 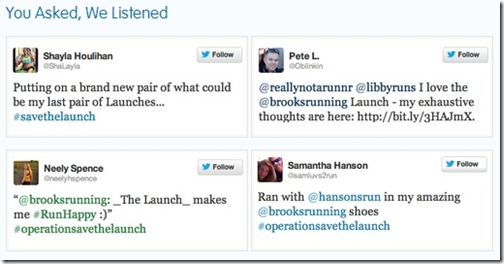 Viva la Launch, and score one for a grassroots uprising by the running community!

You just finished reading The Brooks Launch Has Been Spared!! Consider leaving a comment!