The Changing Nature of Running Injuries in the 1970’s 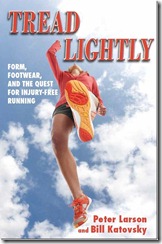 Below is an excerpt from Chapter 2 of my book: Tread Lightly: Form, Footwear, and the Quest for Injury-Free Running.

Ah, the good old days of running.  Runners hear that line a lot, usually from those who started running in the 1960s and 1970s.  Was there really a golden age of running when runners seldom came up lame from an injury? Or is this a mere fiction, an invention or reordering of memory? By the same token, there’s that uncomfortable feeling that running injuries are a modern problem, a byproduct of cushioned shoes with lifted heels, and that runners in the stripped-down shoes of the earlier era were somehow immune to the injury bug. Unfortunately, the truth is not quite that simple.

In his 1935 book “Running,” Arthur Newton includes an entire chapter titled “Troubles.” In the opening paragraph of the chapter, Newton writes the following about running injuries:

“…real intensive training can produce an amazing crop, at any rate during the early stages. If you have nothing else to brag about you can admire the heterogeneous assortment of brand new and unexpected “aggranoyances” it showers promiscuously around. To hint at only a few… blisters, cramp, stitch, colds, uneasy joints, and sinews together with their accompanying holocaust of invigorated language…”

Clearly Newton was more than familiar with what it’s like to be an injured runner! It must be remembered, however, that Newton was also known to occasionally log well over 200 miles of running per week while in his 40s on rough South African roads – this type of mileage is likely to cause problems for anyone. Furthermore, despite his own masochistic mileage totals, he believed that running was less likely to cause injury compared to other athletic pursuits if “you indulge in moderation only.” A perceptive student of human behavior, Newton also addressed how to manage injuries, humorously reporting that there are “remedies which sportsmen have employed all along and which certainly work wonders… (a) grouse, and (b) persistence in regarding them as a joke.”

Running injuries are nothing new, which means that the shoe company giants can hardly be ascribed sole blame for the current plague of running woes. However, detailed accounts of injuries are difficult to come by prior to the 1970’s. It wasn’t until the early 1970s that more systematic documentation of running injuries became commonplace, and much of this early work came in the form of injury surveys conducted by a relatively new magazine (at the time) called Runner’s World.

In 1980, highly respected running biomechanist Peter Cavanagh (currently the Endowed Chair of Women’s Sports Medicine at the University of Washington) wrote a book titled The Running Shoe Book. In it, Cavanagh, who set up and directed the first shoe test lab for Runner’s World, cited the 1971 results of the magazine’s first reader survey of injuries. A total of 800 runners responded to the survey, and each reported the types of “major” foot and leg injuries they had sustained – “major” was defined as “requiring a complete layoff from running.” The five most common injuries reported were:

Cavanagh pointed out that “the shoes used by runners in the 1971-1973 period were lacking in what we now believe to be important protective characteristics,” and that shoes from this period “were heavy, thin under the forepart, lacking in shock absorption, and provided a relatively small differential in height between the heel and forefoot.” As an example of such a shoe, Cavanagh reports that the second most popular shoe in 1971 was the adidas Olympia, which weighed over 12 ounces and had a gum-rubber sole with no midsole or heel wedge.

Cavanagh went on to cite 1979 injury statistics for 974 runners provided by the Runners Clinic of St. Elizabeth’s Hospital in Massachusetts. The top five common injury types were:

Cavanagh acknowledged the inherent limitations of the available data (for example, surveys vs. clinical data as well as injury terminology differences), but it was the best available data from that time period, and he made several interesting observations about how injury patterns changed from the early to late 1970s (a time when both running shoe design and runner demographics experienced dramatic changes).  Cavanagh noted that within the span of ten years, Achilles tendon injuries, metatarsal stress fractures, ankle injuries, and heel bone injuries became less common, whereas knee injuries, shin splints (he combined shin splints and posterior tibial tendonitis percentages for 1979 since he felt that earlier surveys probably included both of these under the category “shin splints”), heel spur syndrome, and leg fractures (mostly tibial and fibular stress fractures) became considerably more common.

Even though knee injuries were the most common injury in each of these studies, Cavanagh was particularly concerned about the rising incidence of knee injuries in 1979. What caused this spike? He speculated that “the combination of poor skeletal alignment and high mileage is going to play its part in knee injuries,” but also indicated that “we also have to examine the proposition, however unpalatable, that shoes, far from preventing injuries, have been partly responsible for them.”  How might this happen? Cavanagh felt that lifting and adding cushioning material under the heel might have helped alleviate Achilles tendon and heel injuries, but that a potential side effect of adding a heel wedge was “inferior rearfoot control.” In other words, excessive pronation, the inward roll of the foot that occurs after ground contact, might have been the culprit that was increasingly damaging runner’s knees as the decade progressed, and it might have been caused by the added elements in shoes that were put there in part to protect runners from Achilles tendon and foot problems

In addition to alterations in shoe construction and the shift in frequencies of injury types, the profile of the average runner changed significantly during this period. By the end of the 1970s, running had become far more of a mainstream pastime. Amby Burfoot, editor-at large for Runner’s World and winner of the 1968 Boston Marathon, says that the “1970 runner was leaner, meaner and faster than the 1980 runner… virtually all (1970) runners were those who continued (running) from high school, college, military service. They were more talented and more closely connected to recent high-level fitness.” In contrast, Burfoot points out that the average runner in 1980 was an individual “still in relative youth who picked up running after reading Jim Fixx’s book, and began training hard. They might have put in a lot of miles, but many were inherently not that talented as runners when compared to the average runner of 1970.” So the population of runners changed from mostly lifelong athletes to individuals who might have been joining the sport for the first time or who were returning to running later in life. Injury studies have shown that new runners are more likely to succumb to injury, so it’s quite possible that this demographic shift contributed to the changing nature of running injuries over the course of the decade; but to what extent is difficult to estimate with any degree of certainty.

During the late 1970s and early 1980s, the development of running shoes went from being mostly an ad hoc, improvisational, affair to one that was heavily influenced by emerging footwear science and research. “Running shoes came out of the dark age,” wrote Cavanagh, and shoe design as it relates to injury prevention became a topic of intense study by biomechanical researchers. One of the main concerns during this period was how to control excessive movement of the rearfoot, or what we now commonly refer to as “pronation control.” The logic went like this: if the raised, cushioned heel of running shoes compromised rearfoot control, and this in turn contributed to the rising incidence of knee injuries, then something needed to be done to stabilize shoes and correct for this.

Thus began the “pronation-control paradigm” that would guide shoe design for decades to follow. Shoes now required structural elements whose intended purpose was to limit the amount of pronation that occurred after the foot made contact with the ground, most often on the outer portion of the heel. The hope was that by keeping excessive pronation in check, the number of knee injuries experienced by runners would be reduced. Over the next 30 years, devices like medial posts, dual density midsoles, flared heels, and rigid heel counters were introduced in a continuing attempt to control potentially harmful movements of the foot that may have been caused by the construction of the shoe itself (mainly their soft, compressible midsoles). These are the very same elements that are found in many modern running shoes; in fact, level of pronation control continues to be the primary factor by which shoes are classified by manufacturers and in most stores today.

There is a lot more to say about the pronation-control paradigm, and we will cover it further in Chapter 6, but for now the most important question to address is this: what has been the effect of this added shoe technology on injuries?

You can read our attempt to answer this last question in Tread Lightly: Form, Footwear, and the Quest for Injury Free Running.

You just finished reading The Changing Nature of Running Injuries in the 1970’s! Consider leaving a comment!