The most recent issue of SGB Weekly features an interesting article by Thomas Ryan on the future of minimalist running shoes. The article focuses on current trends, and runs through how each manufacturer plans to approach the continually evolving footwear marketplace.

The opening paragraphs give a pretty good flavor of what follows:

With many runners reportedly finding barefoot extreme to be too ‘extreme’ for them, more cushioning and support is being added to ultra-lightweight run models for Spring 2014.

“I think consumers are realizing that minimal or natural footwear is not a silver bullet or the across-the-board solution for all runners,” said Mike Thompson, Pearl Izumi’s product line manager, run footwear. He noted that despite all the minimal discussion, nine out of 10 shoes purchased at specialty run are ‘traditional’ run footwear, with stability still making up almost half that market.

At the same time, Thompson noted, “the days of 12 or 13 ounce stability shoes are dying quickly” in an ongoing push away from gadgets and overbuilt cushioning technologies in midsoles.

The general gist is that the push toward ever lighter footwear will continue, but that stripped down shoes with some cushion seems to be the way of the future for minimalism (though barefoot-style shoes will remain as a niche market). This trend is well evidenced by the shoe on the cover of the issue: 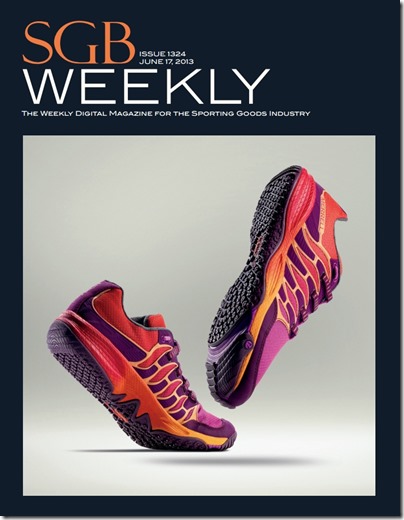 The shoe pictured is part of the Merrell All-Out collection, which will be arriving in Spring 2014. I had the opportunity to see this shoe in person a few weeks ago, and it is a departure from shoes like the Bare Access and Ascend Glove which have a very firm feel underfoot. The All Out shoes are road-trail hybrids that have a much softer midsole, which for me at least should make running long on roads a more comfortable experience. This is one of shoes I’m most excited about for next year.

Other tidbits of note include:

1. Brooks PureProject shoes will get a new sole with a more rounded heel in version 3. The toe-flex groove is being moved to allow the first two toes to function as a unit. I’m skeptical about the value of this since toes 2-5 are flexed by the same muscles, and the big toe is flexed by different muscles – try flexing toes 1 and 2 together independently of the rest, doesn’t work too well, does it … I do like this quote from a Brooks rep:

Kira Harrison, footwear merchandising associate at Brooks Sports Footwear, said the marketplace is clearly seeing a swing back to cushioning. “Lightweight is still relevant in the market, but the conversation is changing,” said Harrison. “It isn’t about one ‘right’ way to run or all about minimal footwear. It is about each individual’s running experience and choosing what’s best for you.”

2. Saucony has mostly updates to existing shoes coming. No mention in the article of the Grid Type A6 – I’ve seen it and it is another of my most anticipated shoes coming down the pipe.

3. Skechers talks about the GoRun Ultra – let’s just say this might be the next shoe I buy for my wife (I have a prototype).

4. Mizuno sees white shoes making a comeback, Pearl Izumi thinks bright color will still be the trend. I side with Pearl.

4. Karhu is doing some interesting things right now, keep an eye on them.

5. The Pearl Izumi EM Road N looks like a pretty sweet shoe – I’m a fan of racing flats and this looks like a nice addition from another brand that is doing some interesting stuff right now.

6. Even Vibram is adding cushion. They’re releasing a more cushioned version (8.5mm) of the Bikila, the VFF Bikila EVO. I wonder how this will affect toe-pocket flex?

7. The upper on the New Balance Minimus Road v2 looks really nice (see photo at to of post). Not sure if the sole or midfoot fit has changed.

8. Prices continue to rise, and K-Swiss in particular has insane pricing for their shoes.

I personally am enjoying the diversity of shoe options that are available right now, and it’s interesting to see how the various manufacturers are approaching the evolving market. I think barefoot-style will (and should) retain a place on store walls, but the immediate future will see more shoes with low drop and some cushion. For me this is a good thing as that’s my sweet spot. How about you, where do you see the future of minimalism headed?